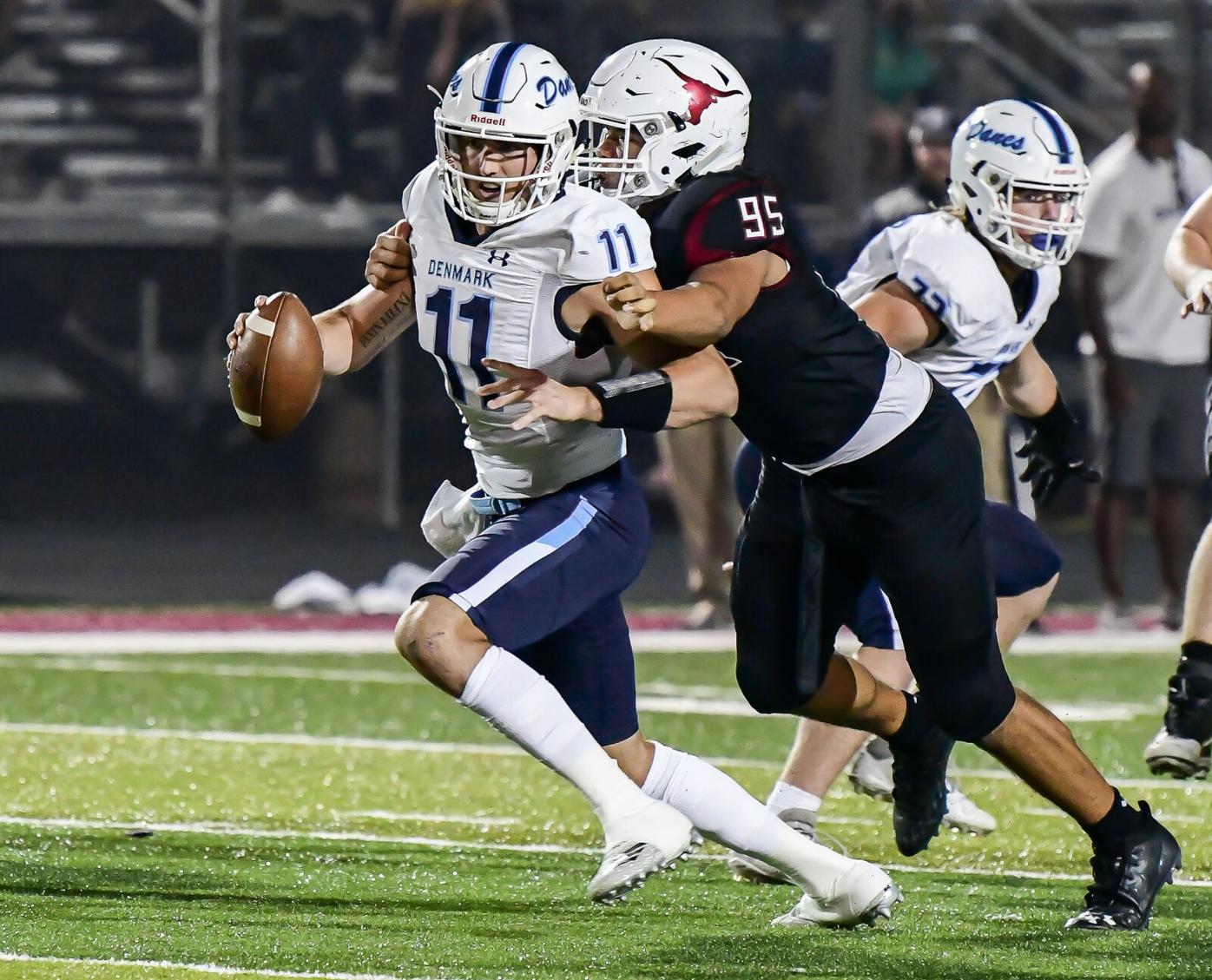 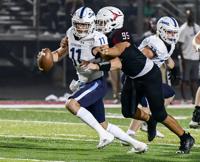 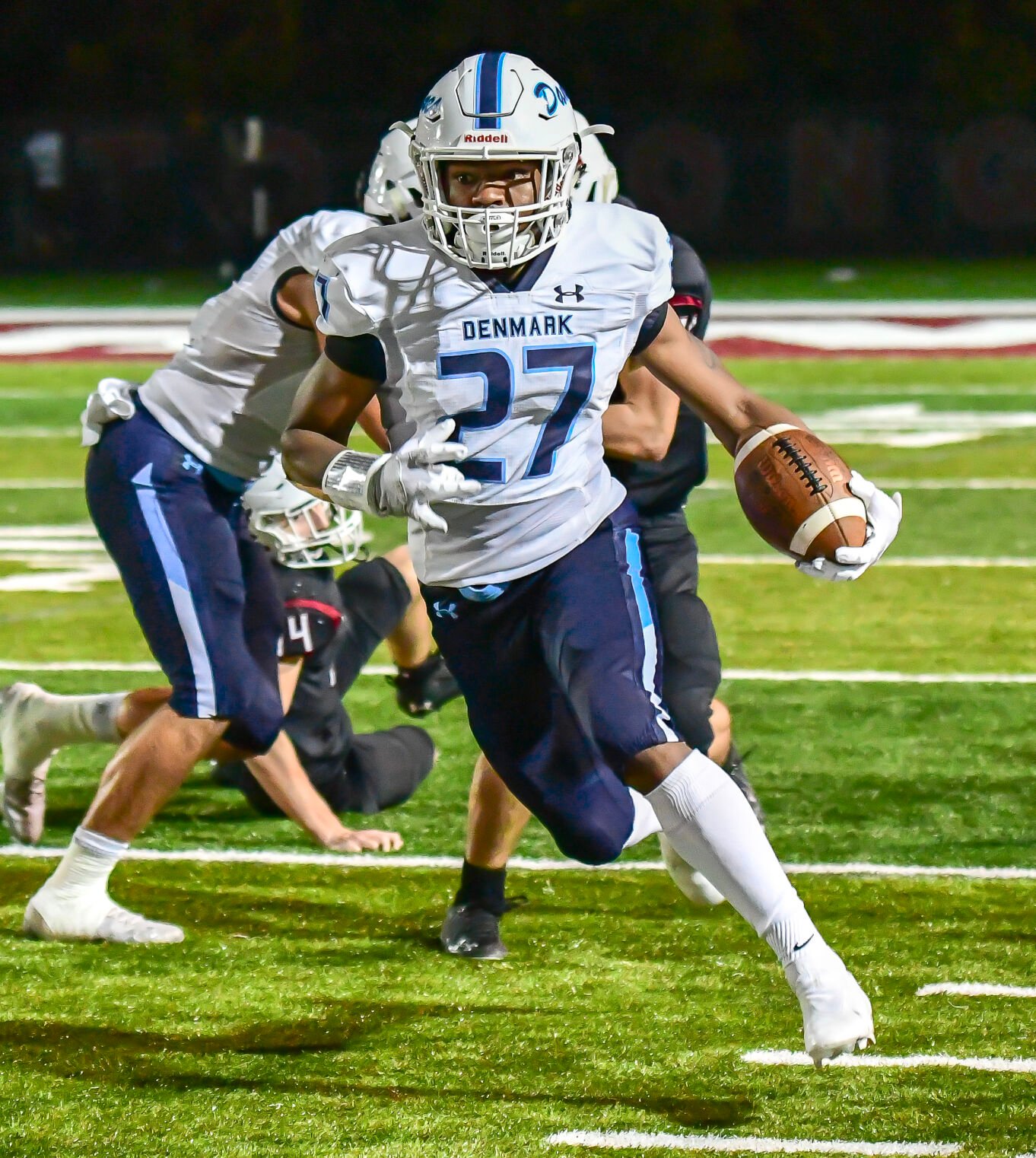 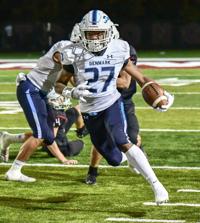 Denmark running back Bradon Roel carries the ball downfield for the Danes.

Denmark running back Bradon Roel carries the ball downfield for the Danes.

Milton stretched its lead to 24-0 lead late in the first half with a Jordan McDonald touchdown, and the junior running back added another score in the third quarter to push the margin to 31-0.

With Friday’s result, the Eagles are tied with Roswell for the top spot in the region.

The Eagles have a bye before taking on Roswell on Nov. 6.

Roswell prevailed in a battle of unbeaten, top-10 ranked teams Friday night, defeating Cherokee 35-28 at Ray Manus Stadium after taking a lead in the final minutes of the contest. Since 2018, the Hornets (6-0, 2-0) are 3-2 against ranked teams.

Roswell quarterback Robbie Roper was responsible for the Hornets’ opening scores. The junior rushed in from 18-yards out for the first touchdown of the game and hit Shaun Spence with a five-yard touchdown to put Roswell ahead 14-7 late in the first quarter.

Roper and Spence linked for another score midway through the third from 12 yards out to give Roswell a 21-14 lead.

Cherokee scored two unanswered touchdowns in the second and third quarter to take a 28-21 lead. The Hornets responded with Roper’s fourth touchdown of the night, a 10-yard connection with Marquis Willis, to tie the game late in the third.

The Hornets chewed clock and moved the ball effectively for a six-minute, 70-yard drive capped off with a touchdown rush from Ryan Hill with 2:29 remaining to go up 35-28.

Roswell’s defense was up to the task of securing the win and got the stop on Cherokee’s ensuing drive.

The Hornets have a bye before facing Milton Nov. 6.

Alpharetta earned its first win in Region 7-6A since joining the fray with a road win over Woodstock Friday night.

The Raiders opened a 31-6 lead in the first half to cruise to the win.

Forsyth Central captured its first region win of the season, edging North Forsyth 28-27 in a thriller at home Friday night. The Bulldogs trailed North most of the game but scored the go-ahead touchdown with three minutes remaining and blocked the Raiders’ PAT in the final minute to secure the win.

North led 14-0 just before the half behind two touchdowns from quarterback Brady Meitz, but Bulldogs’ quarterback Bronson Landreth threw a long touchdown pass with 90 seconds remaining in the second quarter to cut the gap in half.

North extended its lead to 21-7 with four minutes remaining in the third quarter before Central responded with Noal Chol returning the ensuing kickoff for a touchdown. The PAT was missed, keeping the score at 21-13.

The Bulldogs tied the game with eight minutes left on a touchdown pass from Landreth to Chol and a converted two-point play.

With three minutes to go, Landreth threw touchdown pass No. 3, a long connection to senior tight end Devin Hill, to give the Bulldogs their first lead of the game, 28-21.

The Raiders drove the field and scored in the final minute to play, but Central clinched their dramatic win by blocking the PAT.

Denmark retained its position atop the Region 6-7A standings Friday night with a lopsided win over Lambert in the first meeting of the two programs. The two teams have had opposite seasons so far. Denmark lost all three of its non-region games but are now 3-0 in 6-7A play. Lambert won all four of its non-region contests but are 0-3 in region.

The Danes led 24-7 at the half with a rushing and passing touchdown from quarterback Aaron McLaughlin and piled on the points in the second half.

McLaughlin accounted for three more touchdowns in the third quarter to allow Denmark to run away with the win.

James Tyre had a passing and receiving touchdown for Lambert.

West Forsyth took down South Forsyth for the second straight year Friday night, earning a double-overtime win over its county rivals and ending the War Eagles’ undefeated start to the season.

South Forsyth opened the contest with a bang with Kyle Durham connecting with Mitch Thompson for an 80-yard touchdown on the War Eagles first offensive play.

South stretched its lead to 14-0 early in the second quarter with Durham’s second touchdown pass. Devin Mcglockton hauling in the score.

West fought back to tie the game with two straight rushing scores from Daba Fofana.

West took its first lead, 17-14, on a field goal with one minute left in the half, but South marched down the field quickly and scored on a touchdown pass from Durham to Gavin Morris to take a 21-17 edge into halftime.

The two teams continued to exchange scores, and West forced overtime with an interception in the end zone in the final minute of regulation.

The War Eagles scored to open the first overtime period with a touchdown throw from Durham to Morris, but the PAT was missed, keeping the score at 34-28.

Fofana tied the game on West’s first play of their offensive possession, but the game-winning PAT was missed.

West quarterback Keegan Stover hit tight end Oscar Delp on a 12-yard touchdown pass in the second overtime, and the PAT was good to force South to find the end zone on its offensive possession.

Facing a fourth-and-7, South’s pass along the sideline fell incomplete and sent the Wolverines’ into celebration.

West (3-3, 1-1) plays its next three games on the road starting with its Oct. 30 contest against Forsyth Central. South is home against Gainesville.

Fellowship Christian remained undefeated and is now 1-0 against Class 7A programs after downing winless Dunwoody at Bob Lord Field Friday night. The Paladins (6-0, 1-0) have won their first six games of the season four of the last five years. Dunwoody (0-4, 0-2) has dropped its first four games of the season for the first time since 2013.

The Paladins left no doubt, rushing out to a three-score lead just six minutes into the game. Murphy Reeves and Lawson Haigler had rushing scores and Nathan Nardone returned an interception for a touchdown to give Fellowship its 21-0 lead.

The Paladins added more scores in the first quarter on a 3-yard rush from Garrett Wagner and a 66-yard scamper from Reeves. Josh Cole added a touchdown run in the second period to give Fellowship a 42-0 advantage at the half.

Cole added another touchdown, Haigler returned a blocked field goal for a touchdown and Nick Persiano had a rushing score for the Paladins in the second half.

Fellowship gets back to Region 6-A play Oct. 30 on the road against King’s Ridge. Dunwoody also resumes region play in 7-7A against Meadowcreek.

Cambridge and Sequoyah were scheduled to play Oct. 23, but due to COVID-19 protocols the game was moved to Monday, Oct. 26.

Over a month passed between Blessed Trinity’s last game, but the Titans picked up where they left off with a win over Calhoun in a battle of unbeaten, top-10 ranked teams. BT knocked off the Yellow Jackets 35-21 to kick off its debut in Region 7-5A play.

Though BT’s offense turned the ball over four times, the Titans were led by a huge performance from sophomore running back Justice Haynes who scored all five of the Titans’ touchdowns.

Calhoun kicked off the game with fireworks with an 80-yard touchdown run on its opening offensive play. The Titans’ inauspicious start continued with two interceptions on their first two possessions and a 54-yard touchdown pass from the Yellow Jackets to put BT down 14-0 late in the first.

Haynes had the first of his five touchdown runs on BT’s ensuing drive, a 45-yarder with the sophomore stiff-arming multiple defenders out of his path. The Titans tied the game in the final minute of the second quarter, set up by a BT fumble recovery on Calhoun’s 20-yard line.

Haynes got TD No. 3 on the first offensive play of the third quarter from 80-yards out to give BT its first lead of the night, 21-14.

The Titans looked poised to increase their lead but a fumble inside Calhoun’s 5-yard line set up a 97-yard drive from the Yellow Jackets to knot the score at 21-21.

BT committed its fourth turnover of the night on their next drive, but the Titans defense forced a three-and-out, eventually leading to a 9-yard touchdown run from Haynes.

The Yellow Jackets drove deep inside the red zone looking to tie the game again, but BT’s defense held on a fourth-and-goal play.

The road does not get any easier for BT (3-0, 1-0) Oct. 30. The Titans will take on another ranked team in Cartersville. BT ended Cartersville’s 41-game win streak, with Trevor Lawrence behind center, in 2017 and took down the Canes 23-9 for the 2018 Class 4A state championship.

Northview downed Stone Mountain Friday night in a close contest to improve to 1-1 in Region 5-5A.

King’s Ridge and Lakeview Academy squared off Friday night in Gainesville with the Lions taking a dramatic win in the Region 6-A opener for both schools.

King’s Ridge cut Lakeview’s lead to 7-6 midway through the third quarter, but the Lions furthered the margin with a touchdown in the fourth to go up 14-6.

In the final minute of the game, King’s Ridge drove inside the red zone, but their hopes to tie the contest were dashed when the Lions recovered a fumble to ice the game.

Mount Pisgah closed out its non-region schedule and improved to 3-3 Friday night with a win over Class 5A’s Chamblee. The game was the Patriots first contest with a team in a class higher than AA.

After a scoreless first quarter, Mount Pisgah took a two-score lead in the second. Coleman Smith intercepted Chamblee to set up his own touchdown run on the Patriots ensuing drive.

Mount Pisgah’s Garrett Sutherland hauled in an interception to set up a touchdown pass from Smith to Cole Spence to give the Patriots a 14-0 lead two minutes before the half.

Smith earned touchdowns three and four in the third quarter to push the lead to 28-0.

With three minutes remaining, Smith earned his fifth touchdown of the night with a pass to Gabe Carter.