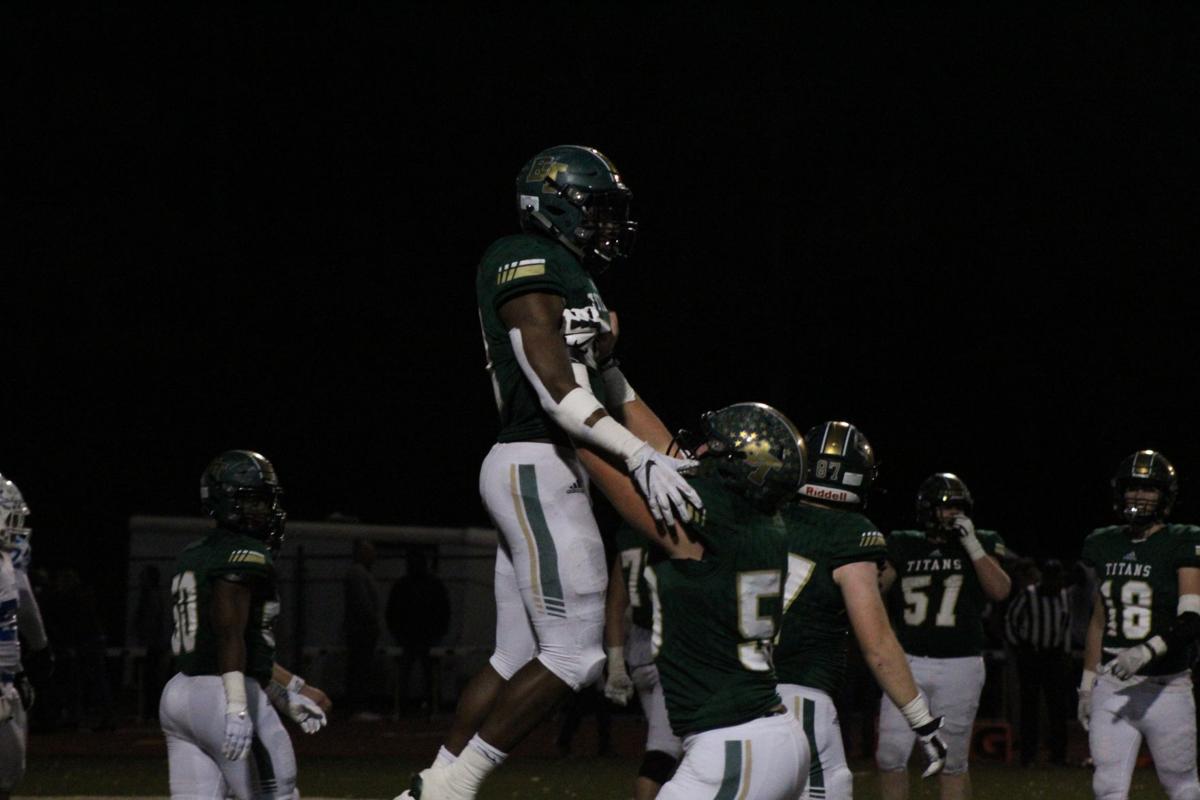 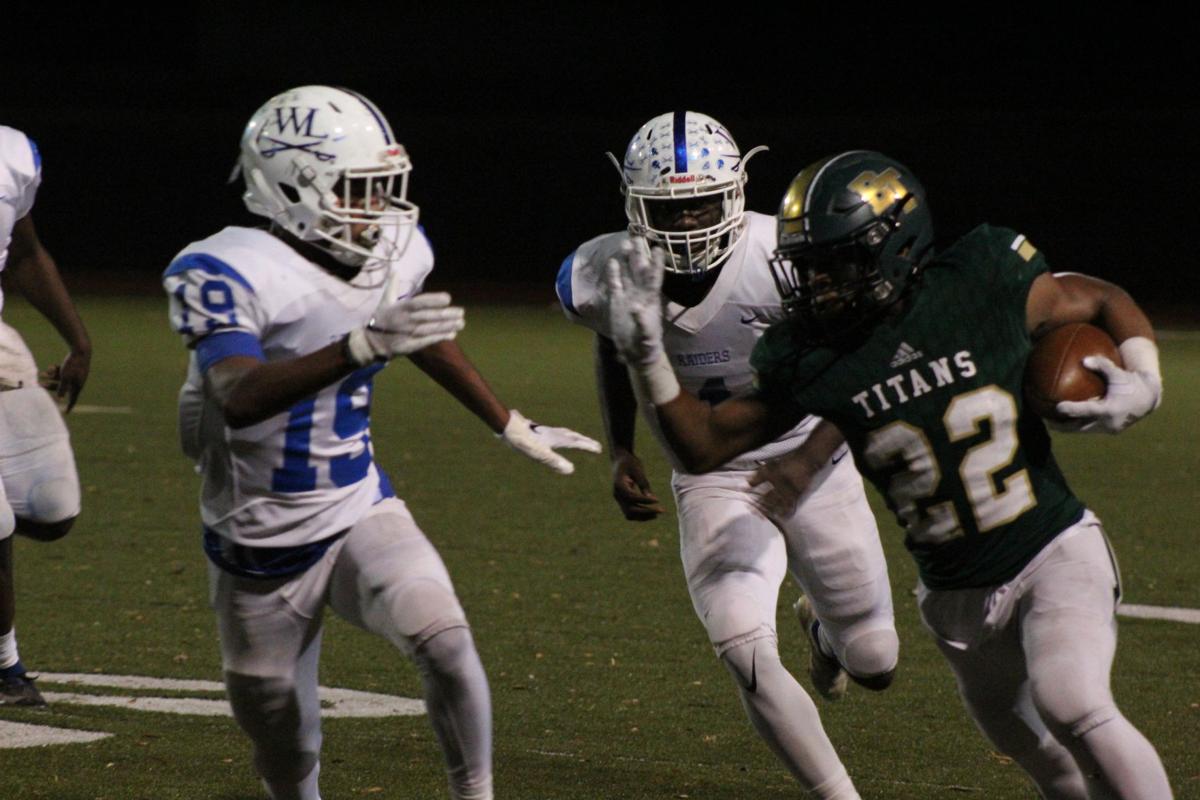 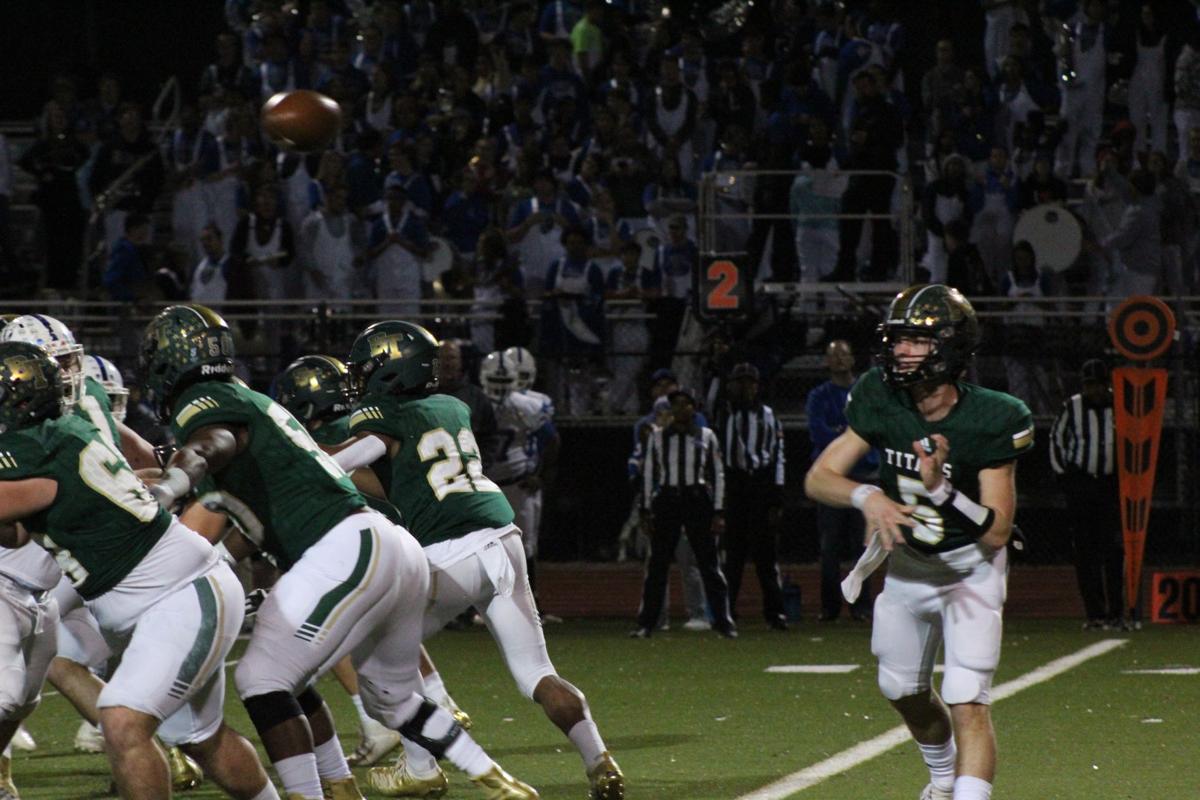 Duncan Reavis (5) throws a pass. Reavis was 6-9 passing for 85 yards with a touchdown. BT's offense had 367 total yards.

Duncan Reavis (5) throws a pass. Reavis was 6-9 passing for 85 yards with a touchdown. BT's offense had 367 total yards.

ROSWELL, Ga. — Blessed Trinity advanced to the semifinals for the fifth time in six years Friday night by shutting out West Laurens (11-2) at home in a top-10 showdown. The Titans were led by a dominant defensive performance that handed the Raiders’ offense — which entered the contest averaging over 400 yards a game and 37 points — its only shutout of the season.

“The way [West Laurens] moves the ball, to post a shutout on that team is pretty remarkable,” BT head coach Tim McFarlin said.

“That gave us some trouble, but we made a great adjustment,” McFarlin said. “I knew we were in good shape about midway through the first quarter, and (defensive coordinator Leo Barker) goes, ‘I got this.’ And I knew he did. That defensive staff, Barker, (defensive backs coach) Chuck Goddard, (safeties coach) Ryan O’Sullivan and (defensive line coach) Jermale Ransby, I just trust those guys.”

West Laurens moved the ball effectively on their opening two drives before BT changed its tactic, but the Titans still held their ground.

The Raiders reeled off 41 yards on their opening two plays of the game, but the Titans held to force a punt. On West Laurens second possession, the Raiders again took to the air and drove the field, but BT came up with a massive goal line stand.

West Laurens was set up with first-and-goal from the 2-yard line but were pushed back four yards on their next two plays. On third down, Bryant hauled in an interception in the end zone.

BT led 3-0 with a 26-yard field goal from Aaron Werkheiser, and just a few plays after Bryant’s interception they furthered the margin.

Freshman running back Justice Haynes reeled off a 38-yard run and then scored from 31-yards out on the ensuing play to put BT ahead, 10-0.

After both teams exchanged possessions, BT ran a perfectly timed play action pass on third down with quarterback Duncan Reavis hitting James Bryant for a 58-yard touchdown midway through the second quarter.

BT’s offense was back on the field moments later after West Laurens went three-and-out, and the 10-play, 53-yard drive was capped off by a 21-yard rushing touchdown from senior running back Elijah Green with under a minute left in the half.

The Titans continued their momentum after the break with Haynes returning the opening kickoff 82 yards to set up Green’s second touchdown of the night.

BT rushed for 282 yards, led by Green with 142 yards and two touchdowns ahead of Haynes who compiled 88 yards and a score on nine carries. Englan Williams received most of the handoffs in the second half and racked up 46 yards on the ground.

“I thought all three of our running backs played well,” McFarlin said. “Englan Williams, who doesn’t get enough credit, has been remarkable for us, Justice has had a spectacular year for a freshman and Elijah is the elder statesman of that group. He’s not only a team leader, he’s a spiritual leader for them. He conducts himself in that manner and I think it really helps those other two guys.”

Green’s score early in the third were the final points of the game for either side. West Laurens’ offense was further hampered by playing without starting quarterback AJ Mathis, who never returned to the game after taking a hard hit from BT’s Ryan Dupont on the final play of the second quarter.

The Raiders had just one first down in the second half, and BT’s Carson Harof added the Titans’ second interception of the game.

With Friday’s win, BT defeated its sixth ranked opponent of the year and advanced to the semifinals for the third straight year.

The Titans will face a familiar foe Friday in Woodward Academy (13-0). Woodward handed BT it’s only loss of the season Sept. 6, taking the 13-10 victory with a converted field goal in the final minute of play.

Roswell girls ousted from playoffs by No. 8 ranked Falcons