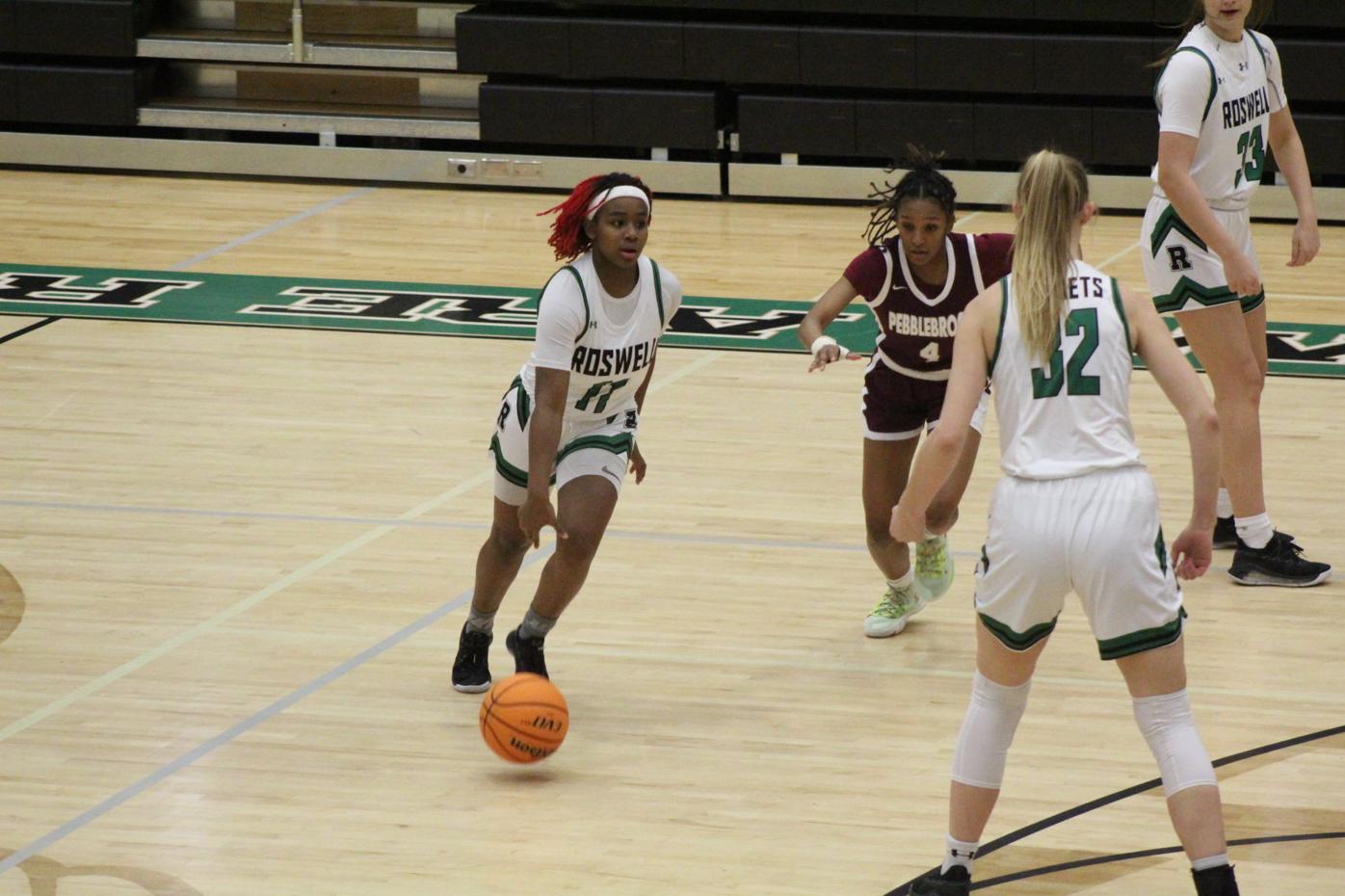 Roswell's Makala Torrence (11) works around a Pebblebrook defender in the Hornets' 60-44 loss. 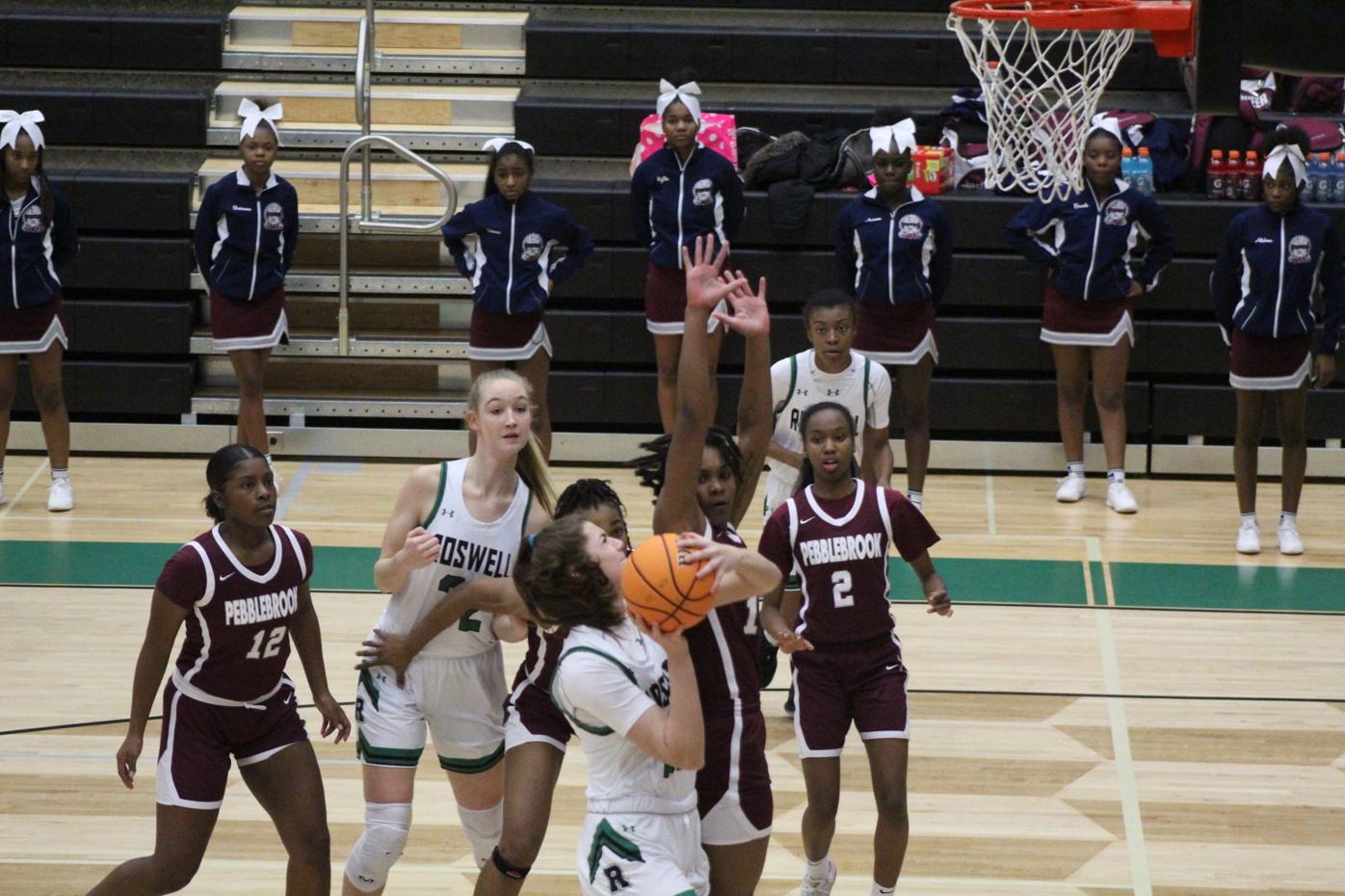 Roswell sophomore Ella Boyle goes up for a shot with teammates Kate Manley (32) and Jasmine Frierson looking on.

Roswell's Makala Torrence (11) works around a Pebblebrook defender in the Hornets' 60-44 loss.

Roswell sophomore Ella Boyle goes up for a shot with teammates Kate Manley (32) and Jasmine Frierson looking on.

ROSWELL, Ga. — Roswell girls basketball had its season end Friday night with the Hornets dropping their first-round state tournament matchup with Pebblebrook, the No. 8 ranked team in Class 7A, at home.

With a tough draw in the first round, Roswell (17-12) head coach Antonio Wade was looking for his team to bring the fight to the Falcons (22-8), but he said the team fell short of that expectations.

Defensive play was another factor.

“We didn’t play defense, and we let them do everything we didn’t want them to do,” he said.

Roswell junior guard Makala Torrence, the Region 4-AAAAAAA Player of the Year, was off the mark for much of the first quarter but hit a few NBA-range 3-pointers in the second. However, her eight points in the quarter was far from keeping up with Falcons, who opened the period on a 10-3 run and outscored the Hornets 27-15 in the period to lead by 15 at the half.

The Falcons entered the game allowing just 41 points a contest, and their suffocating zone defense continued to force outside shots in the third quarter.

Pebblebrook opened its lead to 16 points entering the fourth, but Roswell still had life.

The Hornets went on a 7-0 run to start the period, and two made free throws from Torrence cut Pebblebrook’s lead to single digits for the first time since midway through the second quarter.

However, the comeback bid soon fell apart with the Falcons limiting Roswell to just four points in the final five minutes of play to advance to the second round and end the Hornets’ season.

Wade used the loss as a lesson that his players must compete in all aspects of life following the game. He also thanked the program’s three seniors — Jasmine Frierson, Makayla McNeil and Nickel State commit Kane Manley — for their time with the program on their final night with the Hornets.

While the ending to the campaign was bitter, Wade was still pleased with the team’s 2019-20 season, especially given their youth.

“We won 17 games, so that’s not a bad season, and we were the runner up in the region, getting to compete for a region championship two years in a row,” Wade said. The Hornets fell to Cherokee, who has won the last four region championships, in the 4-AAAAAAA title game Feb. 7.

“I had a lot of fun through the season,” Wade said. “We had some rough patches, but overall I’m happy with the year.”

Friday’s loss ended Wade’s third season at the helm, and he is hoping a more experienced squad returning next year can continue the Hornet’s rise as a team to beat in Class 7A.

“For the most part it has been three good seasons, and I think the program can still ascend,” Wade said. “We just have to get better and get stronger, but I’m really happy with the program and the Roswell community for their support in my three years here.”

The Hornets were held to just two points in the first quarter and were outscored 45-29 in the second half.

Roswell failed to qualify for the state tournament by placing among the top-four teams in the Region 4-AAAAAAA tournament, however, the Hornets earned the Class 7A at-large bid to extend their streak of state tourney appearances to four years. The at-large bid is awarded to the team that accumulates the highest ranking — based on wins and strength of schedule — that does not earn an outright berth in the state tournament.

Hire Dynamics, a staffing company will hold a drive- through job fair for the call center an… Read more

Indulge yourself in Villa Magnolia