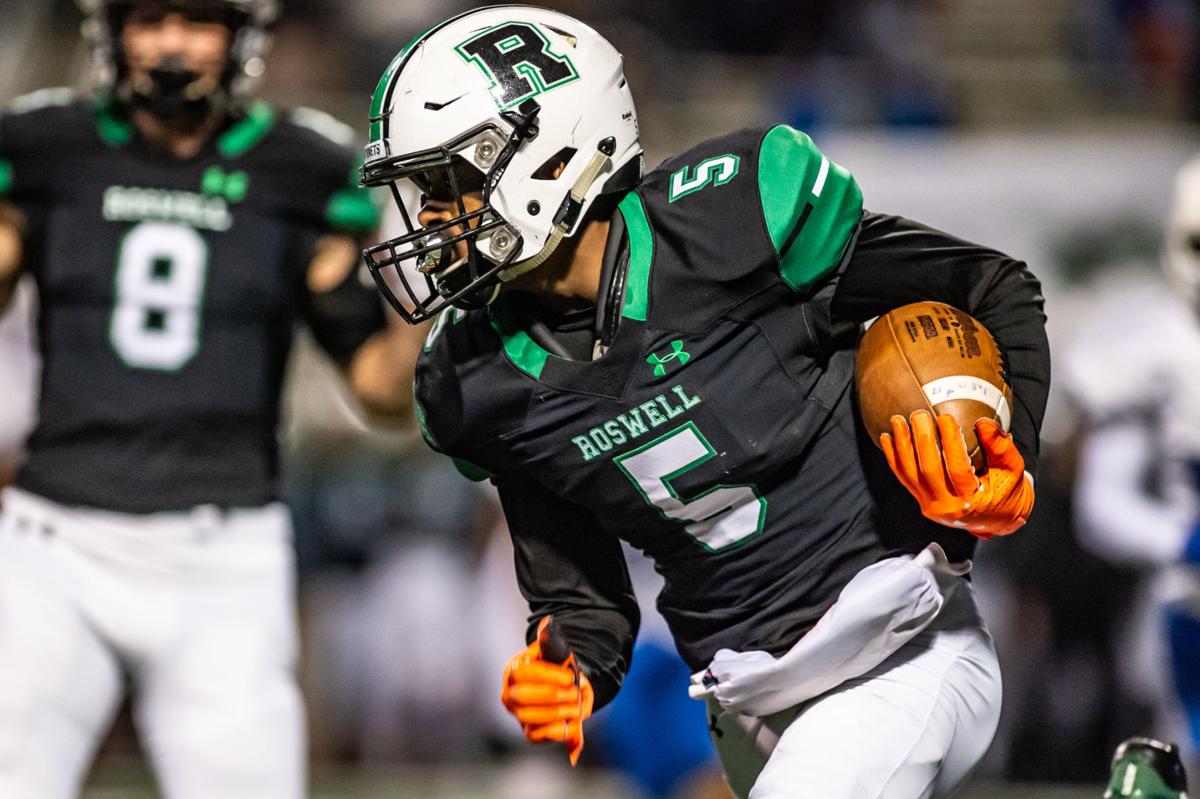 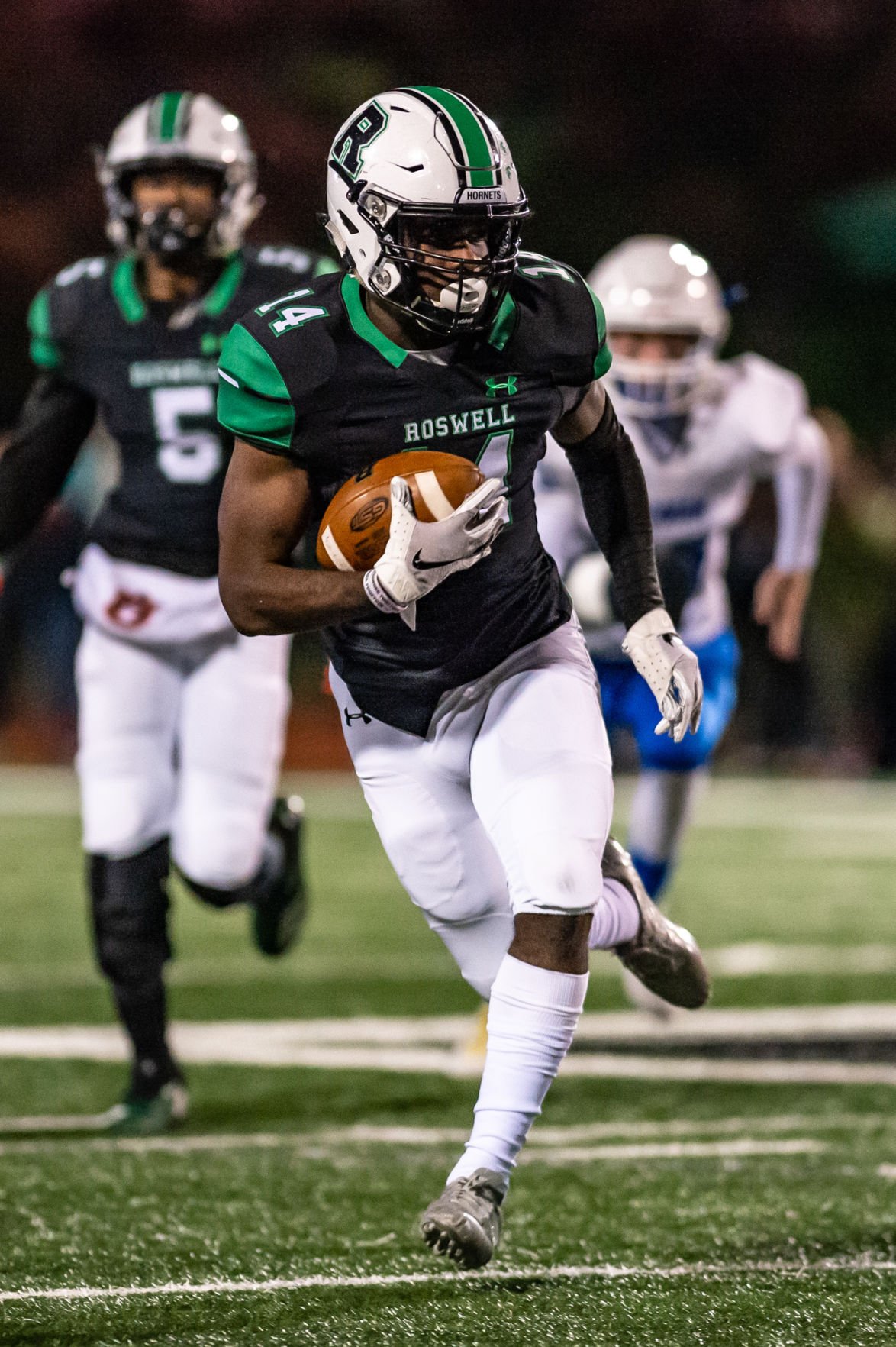 Roswell's Nnamdi Orjioke (14) breaks off a long run against Etowah during their game Friday, Nov. 8, 2019 at Roswell High School in Roswell. (Photo: Will Fagan) 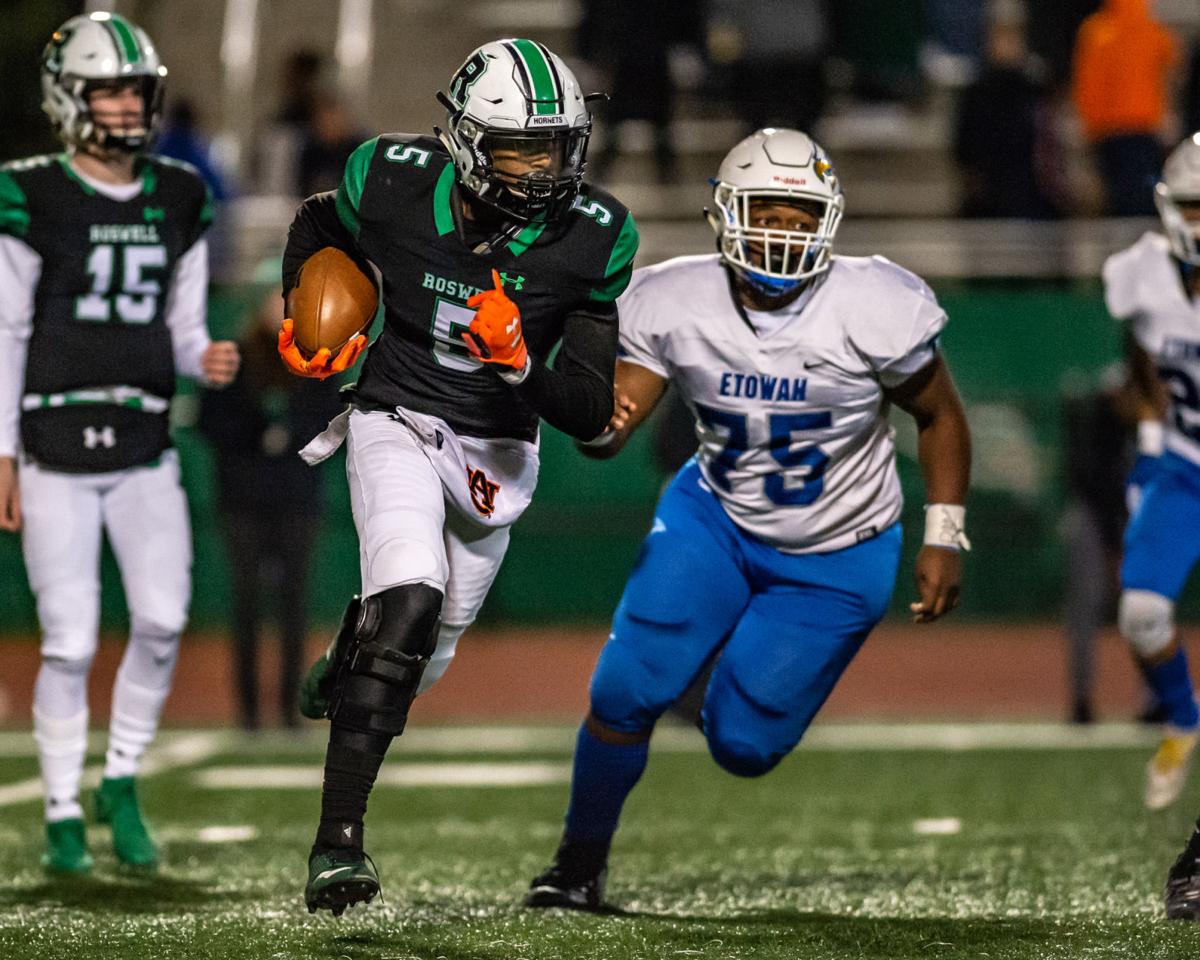 Roswell's Marquis Willis (5) looks for running room ahead of Etowah's Raymone Devezin (75) during their game Friday, Nov. 8, 2019 at Roswell High School in Roswell. (Photo: Will Fagan)

Roswell's Nnamdi Orjioke (14) breaks off a long run against Etowah during their game Friday, Nov. 8, 2019 at Roswell High School in Roswell. (Photo: Will Fagan)

Roswell's Marquis Willis (5) looks for running room ahead of Etowah's Raymone Devezin (75) during their game Friday, Nov. 8, 2019 at Roswell High School in Roswell. (Photo: Will Fagan)

ROSWELL, Ga. — Roswell was aware of the massive implications of their matchup with Etowah Friday night. Win, and the Hornets earn the Region 4-AAAAAAA trophy and are guaranteed home-field advantage in the first two rounds of the playoffs. Lose, and Roswell would fall to No. 4 in the region and be forced to go on the road to face Region 2 champions Westlake.

In the high-stakes affair, the Hornets took care of business, downing Etowah in decisive fashion for their second straight 4-AAAAAAA title.

In the all-important game, Roswell stuck to its guns, relying on the run, solid defense and wearing its opponent down.

“We knew it was going to be back-and-forth early on, but we felt we could wear them down a little bit and take control of the second half, and that’s how it happened,” Kemper said.

The Hornets led 14-7 after a tight first half but opened the game up early in the second and began to erode Etowah’s defense.

After forcing a three-and-out on Etowah’s opening possession of the third quarter, the Hornets were set up with a short field. After a 17-yard completion from Ethan Roberts to Marquis Willis — Roswell’s first completed pass of the game — Savion Mccrary fumbled around the 20. However, the Hornets avoided the turnover and took advantage three plays later with 4-yard touchdown run from Mccrary.

Roswell’s defense, which held Etowah’s starters to 213 total yards, forced another three-and-out to set up another Hornets touchdown.

After a screen pass to Nnamdi Orjioke went 36 yards, Michal Fitzgerald made an impressive catch near the goal line to set up a 1-yard scoring run from Orjioke.

Etowah responded quickly with a 4-play, 74-yard drive, but it was their last offensive success of the contest.

Roswell responded quickly and added to its lead with Roberts throwing a quick pass to a streaking John Copenhaver who took the ball 75 yards to push the score to 35-14 late in the third quarter.

“We would have liked to run ball between tackles a little more, but that’s what happens, people load the box up on us and you have to have answers for that,” Kemper said.

On Etowah’s ensuing possession, Doneiko Slaughter came down with an interception and returned it 37 yards for a pick-six. It was the first of three interceptions by Roswell on three straight Etowah possessions in the fourth quarter.

Dillon Hollifield came down with a pick on a long pass inside the red zone, and Evan Plunkett stepped in front of a receiver on Etowah’s next drive for a 75-yard pick-six to send in the backups for both squads.

John Copenhaver led Roswell’s rushing attack with 68 yards, including a 36-yard touchdown run in the second quarter. Orjioke had 45 rushing yards and 36 receiving yards with a touchdown, Marquis Willis compiled 36 yards on the ground with a touchdown and Savion Mccrary found the end zone with 35 yards rushing on the night.

Roberts was 5-12 passing for 157 yards and a touchdown. Linebacker Walker Clark had a sack and two tackles-for-loss.

It was a fitting win for Roswell’s class of 2020 on senior night.

“We have a senior ceremony every Thursday before the senior night game, and there’s not a whole lot of dry eyes when they thank their parents for everything they’ve done for them,” Kemper said. “They want to do good, and something they lose focus on that, but they’re good kids, and they just try and win.”

Roswell now turns its attention to the playoffs where the Hornets will host Wheeler, Region 2’s No. 4 seed, Nov. 15.

“At our pregame meal we had a guy talk about legacy, and hopefully these guys can make a mark,” Kemper said.