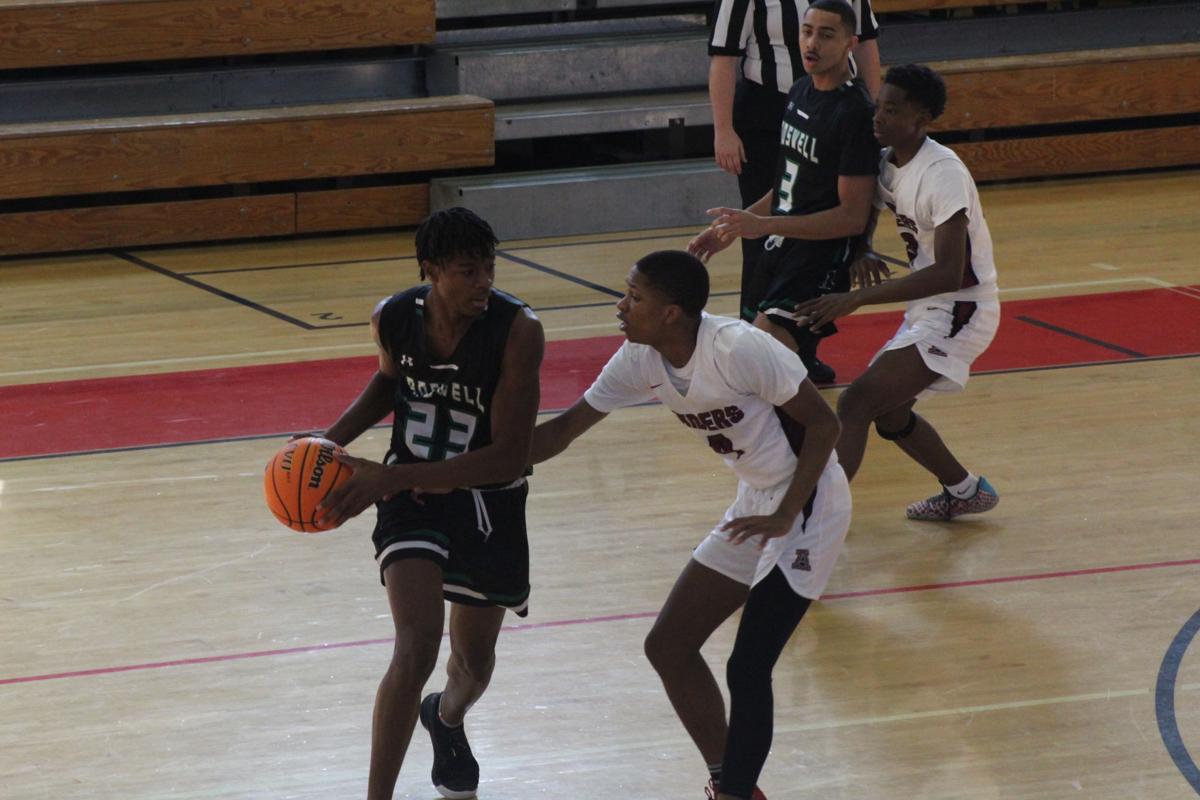 Roswell's Michael Fitzgerald (23) works the ball while being defended by Jamari Denson in the Hornets' 59-54 win. 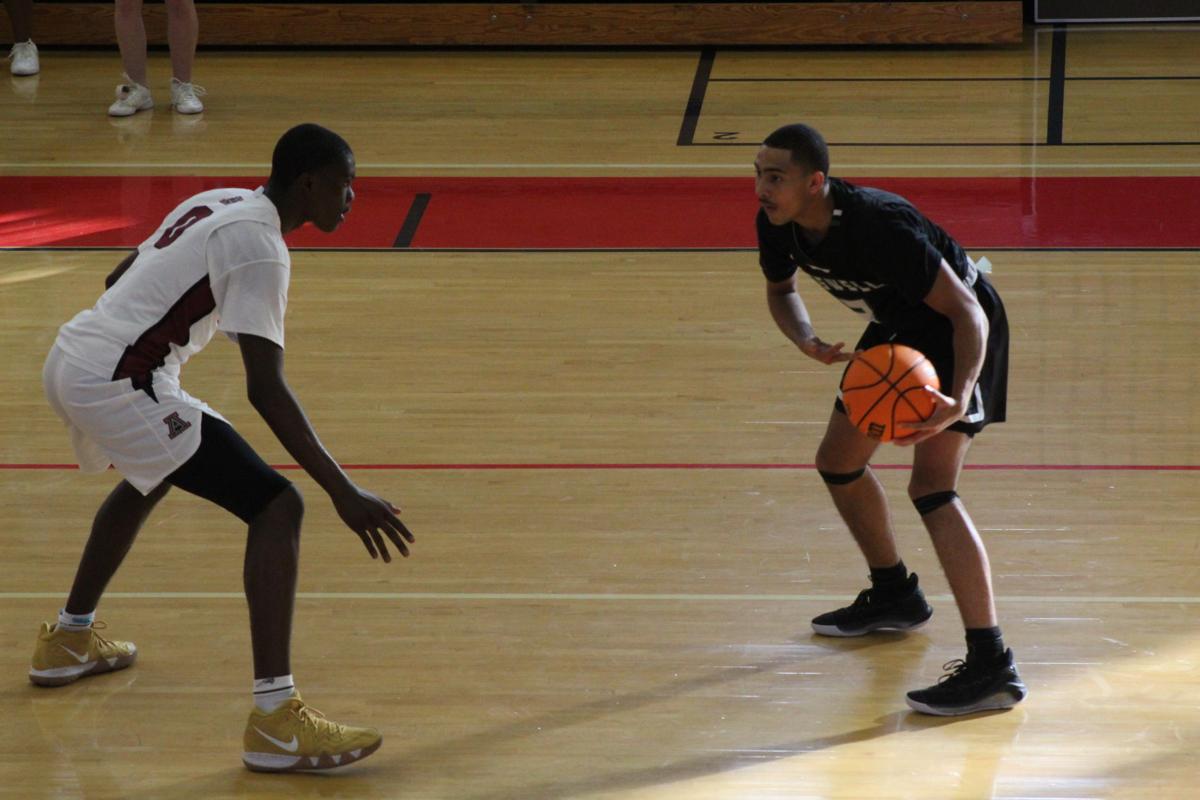 George Pridgett (right) is guarded by Jayden Stephens. Pridgett led Roswell with 23 points and Stephens was the top scorer for the Raiders with 17. 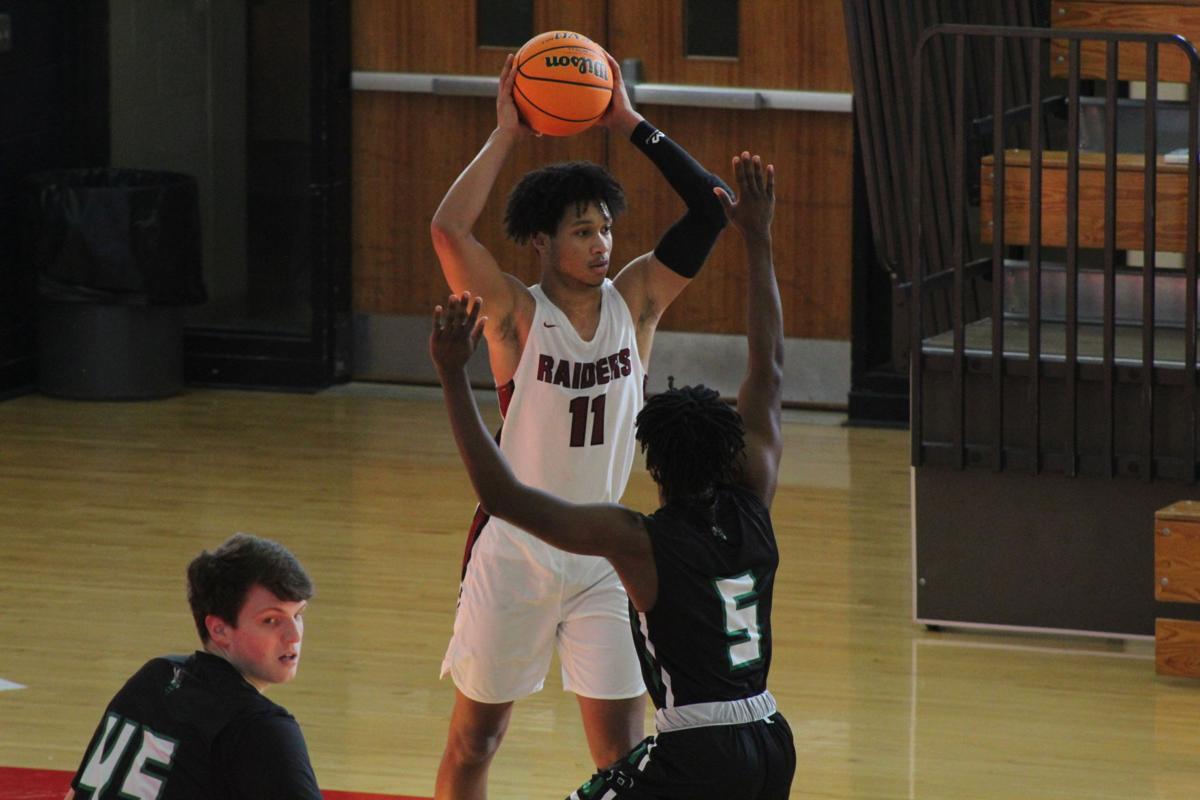 Roswell's Michael Fitzgerald (23) works the ball while being defended by Jamari Denson in the Hornets' 59-54 win.

George Pridgett (right) is guarded by Jayden Stephens. Pridgett led Roswell with 23 points and Stephens was the top scorer for the Raiders with 17.

MILTON, Ga. — Roswell boys basketball jumped out to a sizeable lead over Alpharetta Saturday afternoon matchup in the Survivors and Champions Classic at Milton High School, but the Hornets had to hold off a late comeback to secure their third win of the week.

The Hornets (5-4, 0-0) controlled the first half, holding the Raiders to just nine points in 16 minutes of play. But midway through the third, Alpharetta’s backcourt pressure began to give the Hornets fits.

Trialing 41-22 entering the third, the Raiders (2-5, 1-2) started to have success with the long ball and began to chip away at the lead. Jayden Stephens and Malachi Chipp each hit 3-pointers and Stephens converted three free throws after being fouled beyond the arc to cut Roswell’s lead to 10 points.

With Roswell turning the ball over several times against the Raiders’ press, Alpharetta went on a 12-2 run to start the fourth. With three minutes remaining, the Roswell’s lead stood at just two points following consecutive turnovers from the Hornets.

With their backs suddenly against the wall, Hornets’ junior George Pridgett gave Roswell some separation with critical free throws. Pridgett, who scored a game-winning 3-pointer as the buzzer sounded in the Hornets’ 62-59 win over Lambert Friday night, hit seven of eight free throws and a layup in the final three minutes to keep the Raiders in the lead.

Though the Raiders fought back to within one score with three seconds left, Pridgett was fouled following the inbounds pass and his two made shots sealed the 59-54 win after a dramatic fourth quarter.

“After beating a team the night before that was ranked in the preseason top-10, I was worried about coming out flat, but the kids were ready to play,” Roswell head coach Ty Phillips said. “But we’re so inexperienced and young right now, we have to lead how to play with the lead. We really had complete control at halftime, and credit to [Alpharetta], they came out strong on almost got us, but we were able to settle down, get some big free throws at the end and come away with a win.”

The Hornets’ win puts the team above .500 for the first time this season, and Phillips is banking his youthful squad will continue to improve.

“The ceiling for this team, we’re not even close to it,” he said. “We are going to keep getting better and better because we’re so young. We are pleased to go 3-0 this week, but we’re far from where we need to be.”

While Saturday’s game extended Roswell’s winning streak, it added to the Raiders’ drought. After winning two of their opening three games, Alpharetta has dropped four straight.

Both teams will take on region opponents next week. Roswell opens Region 4-AAAAAAA play against Woodstock and Walton while the Raiders face Region 7-AAAAAA opponents Pope, Centennial and Johns Creek.