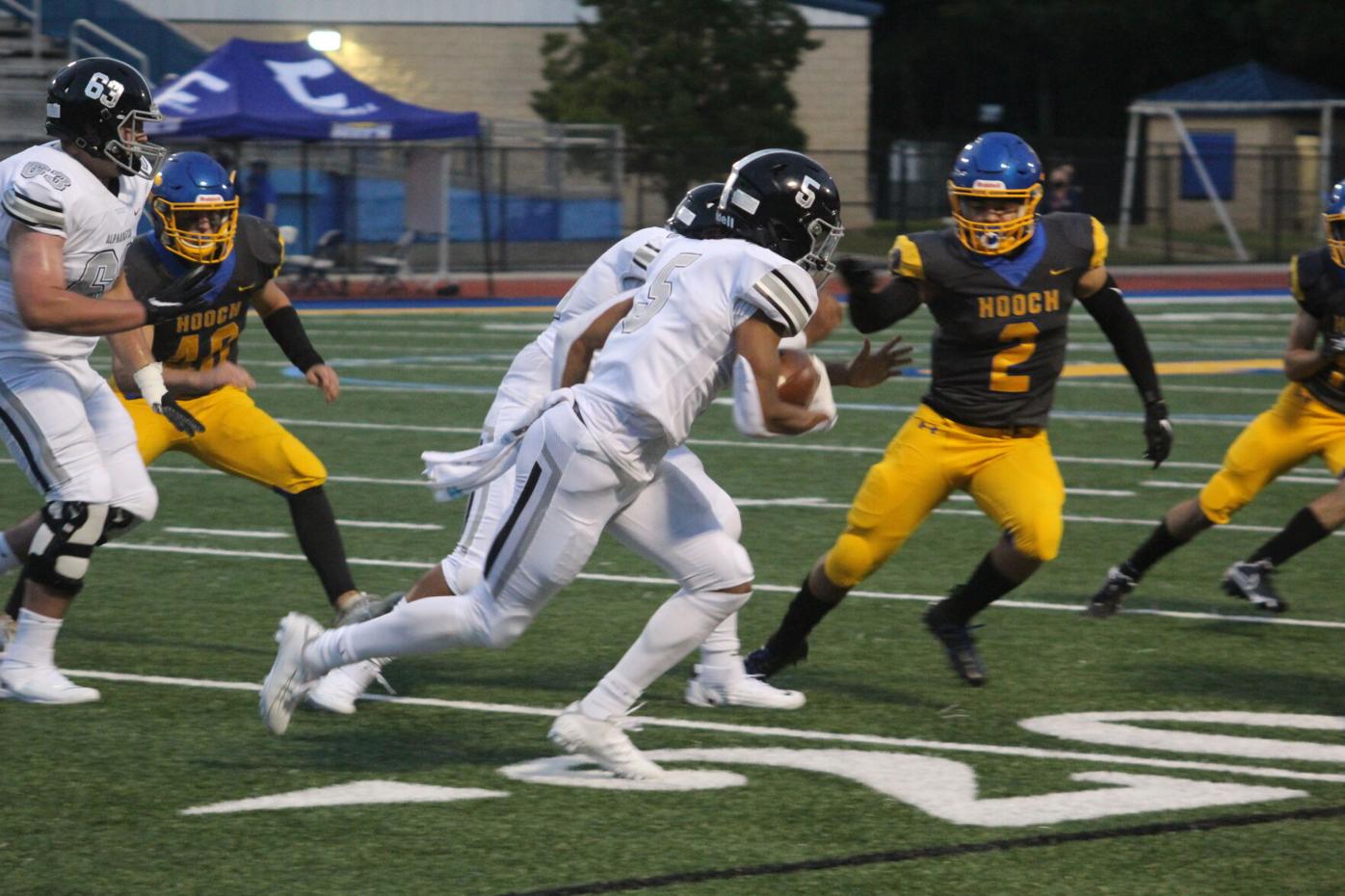 Alpharetta senior and Stanford commit Jaden Slocum takes a pass up field against the Chattahoochee defense. 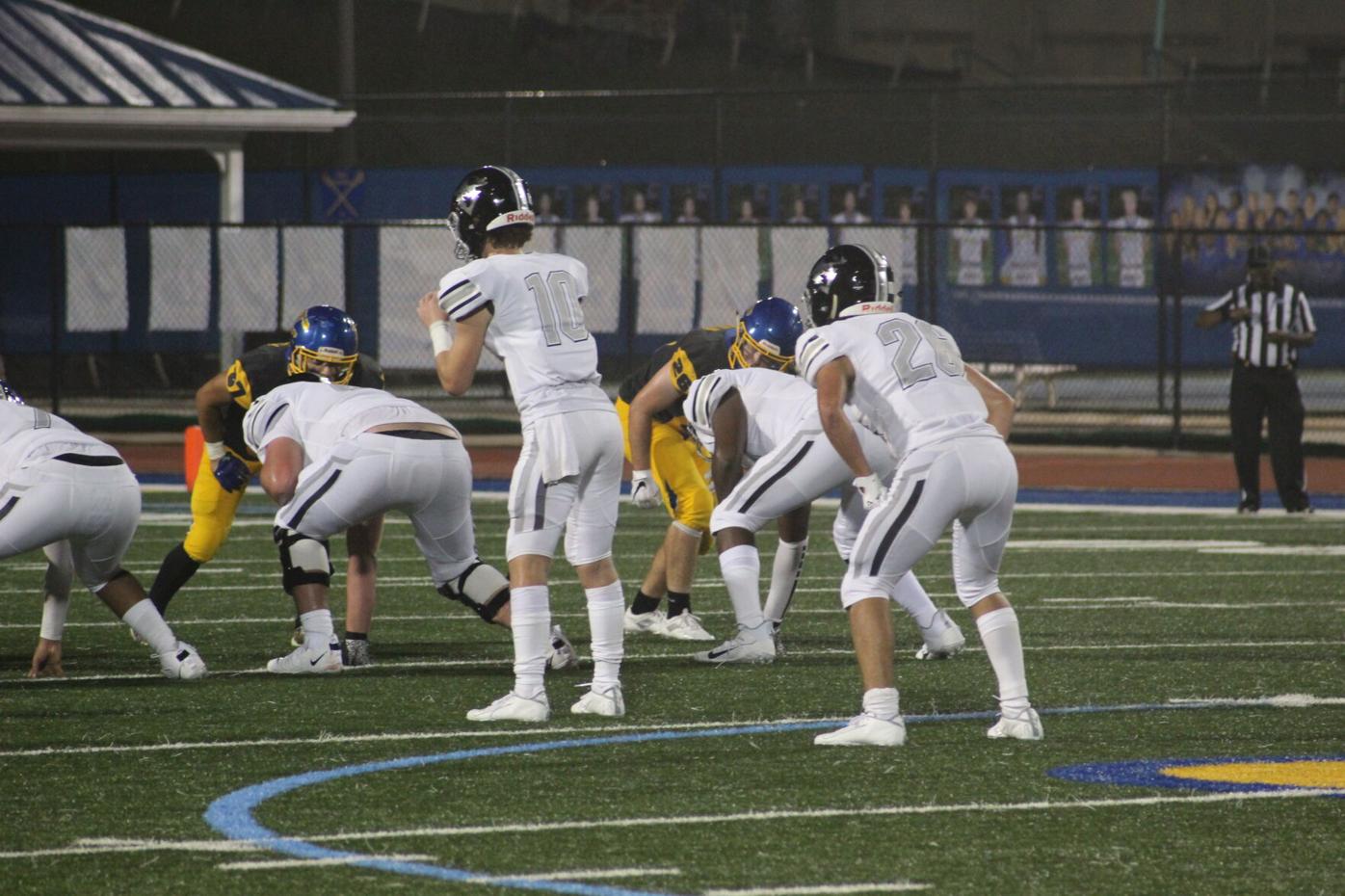 ALPHARETTA, Ga. — Though Alpharetta and Chattahoochee no longer belong to the same region, there was still plenty on the line when the two schools lined up Friday night for an intra-city football matchup.

The last time Chattahoochee defeated Alpharetta was 2007, although the Raiders and Cougars didn’t play for four years between 2008-11. The Cougars struck first in the 2020 edition of the rivalry, but in the end, the Raiders came out on top for the ninth consecutive time in the matchup and first in the head coach Jason Kervin era.

“We had to earn it,” Kervin said. “I knew coming over here that Coach [Malone] is doing a great job with those guys. They got some dangerous players over there, and you can tell their program is on the ascend. I knew it was going to be a tough game.”

Defense was the story of the first quarter, as each squad’s offenses were forced to punt the ball multiple times.

On the first play of the second quarter, senior quarterback Jaylen Smith found junior receiver Ben Godwin wide open down the sideline for a 50-yard gain down to move Chattahoochee all the way to the two-yard line. On the next play, Smith kept the ball himself and scampered for an easy two-yard touchdown run to put the Cougars in front.

The Raiders countered the Cougars’ score with a seven-minute, 80-yard drive capped off with a three-yard touchdown pass from Ben Guthrie to Tylan Johnson.

The defenses bounced back to end the first half, as Alpharetta recovered a fumble and Chattahoochee came up with an interception by Elijah Character at its own goal line.

The two teams entered halftime tied, 7-7. In a socially-distanced version of the halftime break, each team gathered on opposite ends of the field to re-group instead of using the indoor locker rooms.

To start the second half, the offenses began to find their rhythm, but the defenses did not break.

Chattahoochee received the ball first in the third quarter and drove from its own 25-yard line to the Raiders’ 8-yard line. The Cougars went for it on fourth-and-goal, but the Raiders defense, with playmakers such as Jaden Slocum, Dylan Merrell and Vito Perri, came up with the stop.

On the ensuing drive, the Raiders drove from their own 8-yard line to the Cougars’ 40-yard line. The defense won the fight once again, as Peter McVay, Billy Spradlin, Jaden Gaines and company forced a turnover on downs and Chattahoochee took over on offense. However, the Cougars punted for the third time of the game and quickly gave the ball back to Alpharetta.

Still tied with the Cougars, Guthrie and the Raiders offense took over at their own 7-yard line and went to work.

The sophomore quarterback Guthrie and sophomore running back Jake Gil carried a heavy load not only on this drive, but throughout the entire game. Guthrie finished the drive with a 10-yard rushing touchdown to give Alpharetta its first lead of the night with 7:12 left in the game.

The Raiders’ defense forced a punt by the Cougars on the next drive, and the Raiders’ offense capitalized. Quickly.

On the first play of the drive, Guthrie lofted the ball deep downfield to Slocum, who ran under the ball and took it into the end zone. The Raiders took a two-score lead, 21-7, with 6:25 remaining in the game.

From there, the Raiders’ defense made one final stand to seal their first victory of the season.

“They’re fighters,” Kervin said. “We’re not a well-oiled machine. We’re making a lot of young mistakes … We’re still trying to find out about ourselves a little bit. What we found out tonight is that when our backs are against the wall, we’re going to keep the pedal to the metal and keep fighting. I was proud of that no matter what.”

Guthrie finished with 145 yards and two touchdowns through the air and 59 yards and one touchdown on the ground.

Jaylen Smith finished with 212 all-purpose yards (108 passing, 104 rushing) and one touchdown in the loss for Chattahoochee.