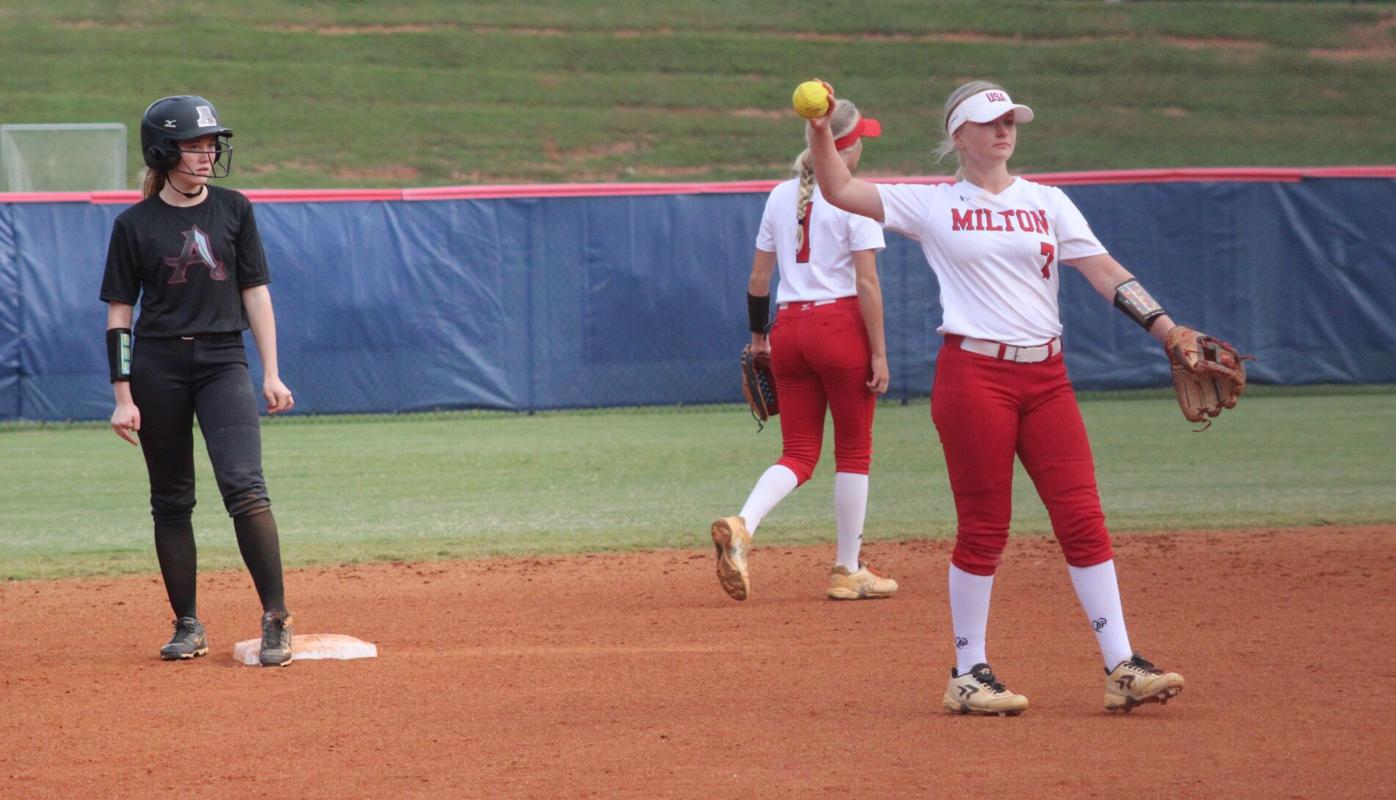 Milton softball player Parker Holcombe throws the ball back to the pitcher during a Sept. 23 game against rival Alpharetta. 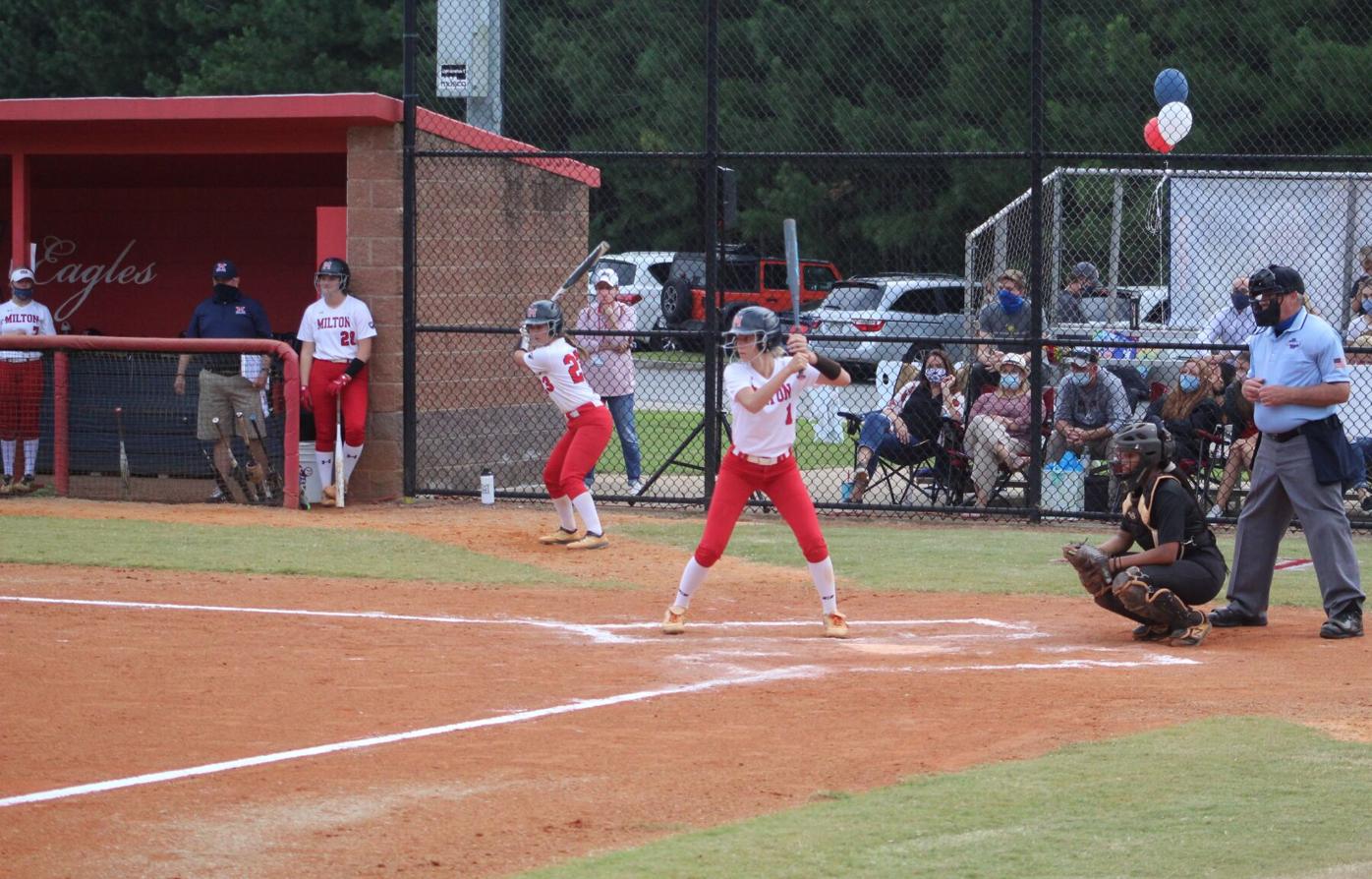 MILTON, Ga. — The Milton and Alpharetta softball teams took to the diamond Sept. 23 for a battle between two longtime rivals and newly-minted region foes.

The two teams traded share of the lead, but in the end, the Eagles came from behind and came out on top of the Raiders in their first game as region opponents since 2011. The Eagles won by mercy rule, 16-6, following a 12-run bottom of the sixth inning.

“It was a rather slow start,” Milton head coach Shane Holcombe said. “We’re a high-speed, high-intensity team. We let the other team play us at first until we settled in and started making things happen.”

Junior pitcher Kiley Perry, who was also celebrating her birthday, started on the mound for the Eagles and pitched six innings in the win. Perry struck out two batters in the top of the first inning, her first of seven strikeouts in the game.

Junior Haydn Bendall led off for Milton with an infield single and quickly worked her way around the bases. The next batter, sophomore Nora Megenity, drove in Bendall with a sacrifice groundout to shortstop, and the Eagles took an early lead over the Raiders.

Two batters later, Perry helped her own cause, as she roped a line drive over the centerfield fence for a solo homerun.

“Kiley is Kiley,” Holcombe said. “Kiley is a competitor. That’s what you’re going to get out of her 24/7, 365 … You’re going to have her bat, her pitching, and she can play infield too. She’s a very good ball player.”

After one inning of play, Milton led Alpharetta, 2-0.

Alpharetta earned one run back in the top half of the second inning, as senior Holley Sanders drove in a run for the Raiders to bring the score to 2-1.

Milton nullified the Raiders’ one run scored in the top of the second inning by scoring one run of its own during the bottom of the inning.

The Raiders did not relent. In the top of the third inning, senior K.K. Farrar brought two baserunners home with a double to centerfield. The Raiders tied the Eagles, 3-3.

Meanwhile, the offense stalled for the Eagles against the pitching of Tucci. Following production on offense in the first two innings, Milton went scoreless in the third and fourth frames.

Milton scored one run in the fifth inning off an RBI single from senior Ashley Abel, but the Raiders added another run in the top of the sixth to take a 6-4 lead and keep the lead at two runs.

In the bottom of the sixth inning, Milton re-claimed control of the game thanks to a parade of hits and walks.

The Raiders walked four batters through the first five innings of the game, but in the sixth inning alone, they walked four more Milton batters. And when they did throw the ball over the plate, the Eagles were putting the ball in play at a high rate.

The Eagles tied the game at six runs apiece with a bases-loaded walk and sacrifice fly. Following two wild pitches that found the backstop, Milton scored twice more and took the lead, 8-6.

Megenity and senior Olivia Stefl had back-to-back two-RBI hits to the outfield, which brought the Eagles lead to 12-6.

The Raiders were unable to find a third out in the inning, as the Eagles’ bats continued to stay hot and runners continued to cross home plate.

“The bats got hot, pressure got put on them and we capitalized on some errors they had, which is what they were doing to us earlier in the game,” Holcombe said. “It flipped on us, but I sure wish we would have had those 12 runs in the first inning instead of the last.”

For Milton (3-2, 1-2), the win over Alpharetta was their third of the new season. The Eagles swept Cambridge in a doubleheader to open the season but were then swept by region foe Etowah in their second series of the season.

Alpharetta fell to 1-4 overall and 0-2 in region play with the loss to Milton. The Raiders played new region opponent Cherokee in their third game of the season and lost 9-0.

One challenge facing Alpharetta and Milton, along with fellow region member Roswell, is the game of catch-up they are forced to play in Region 5-AAAAAAA. As Fulton County schools, the three teams were unable to play their first game until Sept. 6. Their three other members of the region, Cherokee, Etowah and Woodstock, began playing games as early as Aug. 8.

Despite the disadvantage their teams face to begin the season, Holcombe and Alpharetta head coach Edward Francis both feel their teams have a shot at making the playoffs.

“Our girls have really came out firing for the most part,” Holcombe said. “How I see it is we have a team that can do some things. I’ll leave it at that.”