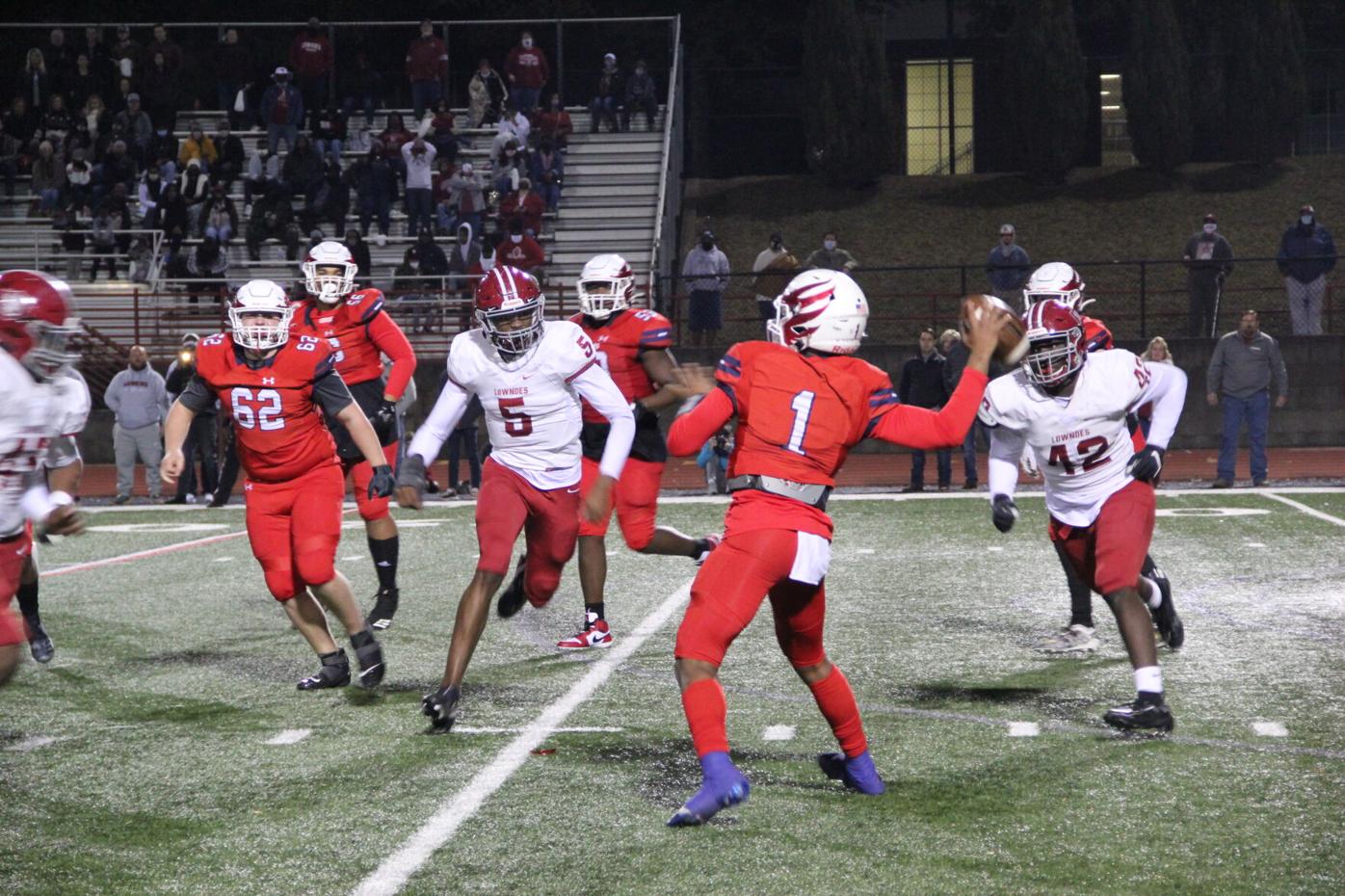 Milton quarterback Devin Farrell (1) launches a pass in Milton's 23-13 loss to Lowndes. Farrell returned to action for the Eagles after an injury kept him out of the second round of the playoffs. 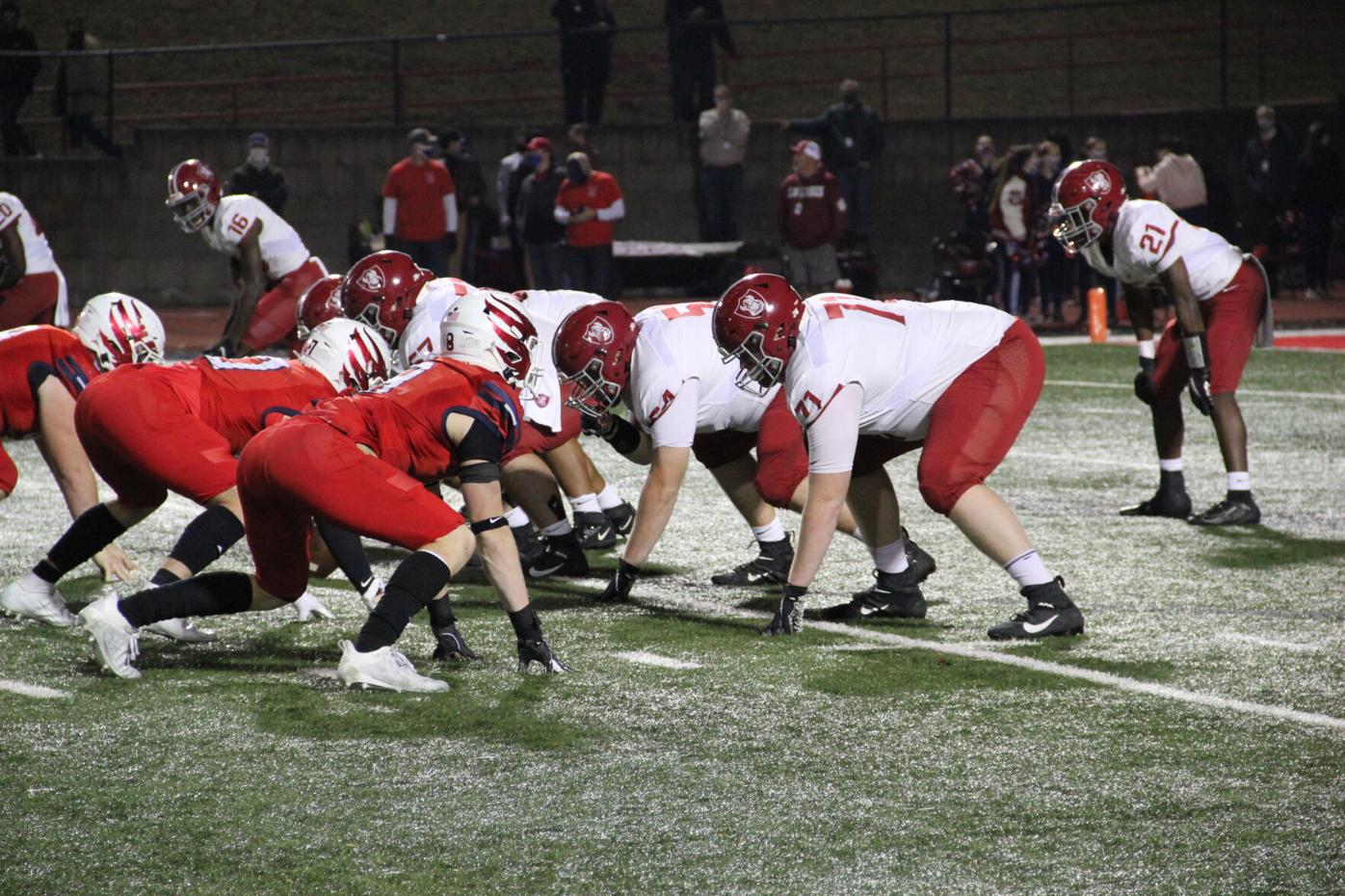 Milton senior Dayne Edwards (8) finished with one sack and three tackles for a loss against Lowndes.

Milton quarterback Devin Farrell (1) launches a pass in Milton's 23-13 loss to Lowndes. Farrell returned to action for the Eagles after an injury kept him out of the second round of the playoffs.

Milton senior Dayne Edwards (8) finished with one sack and three tackles for a loss against Lowndes.

MILTON, Ga. — The season nearly ended before it even started, but football teams across North Fulton overcame countless obstacles and made it through.

While overcoming the adversity brought on by the pandemic, Milton finished 9-0 in the regular and won its third straight region title. The Eagles won two playoff games, including a comeback win over a top-10 team. The 2020 season, one for the history books for several reasons, came to a close Friday night for Milton, as the Eagles fell to No. 4 Lowndes in the quarterfinals, 23-13.

“To navigate what 2020 was, navigate a new and tough region, and make it to the elite eight, it was a rewarding journey to fight and claw and tinker and make adjustments,” Milton head coach Adam Clack said. “We were thriving in this grind and having great practices down the stretch. I think everybody is ready for 2020 to be over with in every walk of life. These kids just kept fighting through the uncertainty. I’m so dang proud of them.”

Lowndes struck first in the 7A quarterfinals matchup, taking a 7-0 lead in the first quarter with a 22-yard touchdown run.

Following punts on Milton’s first two drives, the Eagles responded offensively and prevented the Vikings from building on their lead. A 42-yard run by Bryce Thornton helped move the Eagles down the field, and Jordan McDonald finished the drive with a 2-yard touchdown run.

The Eagles had a chance to take the lead in the second quarter on a 40-yard field goal attempt by Jason Aussin, but the Vikings blocked the kick and returned the ball into Eagles’ territory.

Milton’s defense didn’t allow Lowndes to capitalize on the field position, as Thornton intercepted a pass near the goal line on third down, and the teams hit the locker rooms at the half tied 7-7.

McDonald earned a majority of the carries in the first half, running the ball 15 times for 59 yards and one touchdown. Thornton rushed four times for 67 yards, including his 42-yard run on Milton’s scoring drive.

Lowndes scored on the opening drive of the second half, hitting a 27-yard field goal to go up on Milton, 10-7.

Lowndes scored two more touchdowns to take a 23-7 on the Eagles, who were unable to score again until a kickoff return in the game’s closing minutes. Following a touchdown by Lowndes. Milton junior Cam Cainion returned a kickoff 95 yards for a touchdown to keep the Eagles’ season on life support.

Milton forced Lowndes to punt on the ensuing drive and got the ball back down 10 points with 1:45 left in the game. Farrell completed two deep passes to Debron Gatling and Matthew Evert to move the Eagles down the field, but a third pass to the end zone was intercepted, all but ending Milton’s season on the spot.

Lowndes took a knee to run the clock out and advance to the 7A semifinals, while Milton’s season came to a close.

“It always stinks when you come up short,” Clack said. “They just made one more play than we did. The kids had the fight in them all the way down to the end. I’m proud of that. Obviously I’m upset with the result, but I’m proud of the fight.”

“The result wasn’t what we wanted tonight, but the body of work is truly impressive,” Clack said. “Those guys have a lot to be proud of. They left Milton a lot better than they found it.”

Milton flew under the radar at times during the 2020 season, but the Eagles will likely be on everyone’s radar come time to kick off the 2021 season.

Milton will return a bevy of playmakers from this year’s team. On offense, the Eagles will bring back rising seniors Devin Farrell, running back Jordan McDonald and tight end Jack Nickel, along with rising sophomore Debron Gatling at wide receiver and several starters on the offensive line. On defense, the Eagles will return rising juniors Bryce Thornton and L.T. Overton, two highly touted players, and many other starters from this year’s group.

“I’m bullish on the Milton Eagles, but I can promise you we won’t rest on any laurels,” Clack said. “We won’t rest on what people say about who we are. We’ll let this sink in, learn our lessons from this and then be excited as heck to turn back around and build the 2021 iteration of this program.”