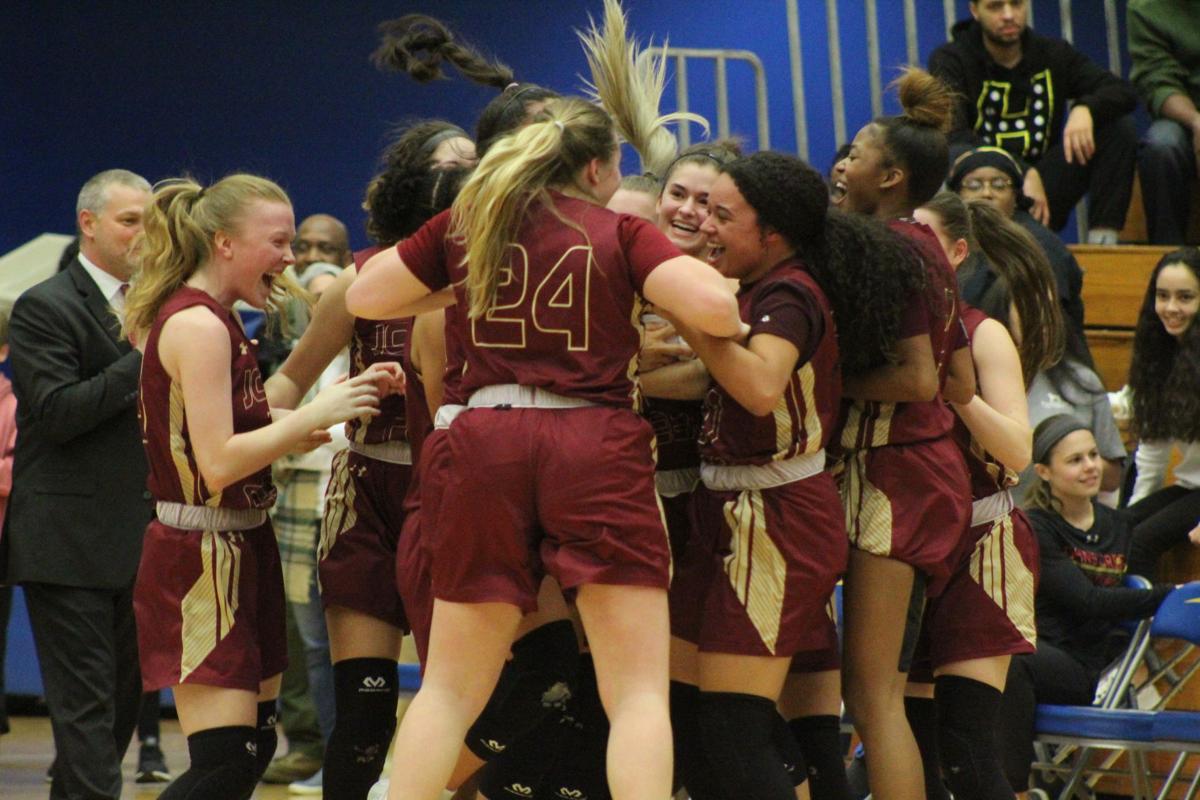 JOHNS CREEK, Ga. — Johns Creek girls basketball made history Saturday night with a 48-43 win over Cambridge in the 7-AAAAAA tournament, the first region basketball title for any Gladiators team, boys or girls.

The win continued the rising trajectory of a program that had never reached the state playoffs four years ago. After earning their first state bid in 2017-18, the Gladiators returned last season and will enter this year’s bracket as a No. 1 seed with a region championship under their belt.

“This group has fought and fought, and the three seniors we have this year have played all four years,” Johns Creek head coach Kirk Call said. “They kept getting closer and closer, and to get over that hump, I’m just so happy for them.”

To capture the title, the Gladiators had to outperform a Cambridge squad that was having its best season in program history and chasing its first region crown.

The two championship-hungry teams battled throughout the contest, with the largest margin of the night a 10-point Johns Creek lead. Despite exchanging blows, Johns Creek built its lead to double digits in the third quarter and held the charging Bears in the fourth period to secure the region crown.

It was quite the birthday present for Call, with his squad singing “Happy Birthday” to him before accepting the championship trophy.

“It was the best thing they could have given me,” Call said.

The first half featured physical play and a defensive battle from both teams with the Gladiators building a 26-21 lead at the half. Johns Creek was led throughout the night by junior Carson Tanguilig, who had an exceptional first half with 13 points, nine rebounds and a steal. She also drew two charges in the second quarter. The guard finished the night with 19 points and 11 rebounds.

“Defensively they were so locked in early and did such a good job of having each other’s backs,” Call said. “It took [Cambridge] out of what they wanted to do a little bit. And really, one thing everybody underestimates about this team is how much they love and fight for each other. In that first half we rotated over and created three charges, we’re rotating on the backside, and seeing kinds block out to allow their teammate to come in a get a rebound. They were so selfless tonight.”

The Gladiators continued to add to the margin in the third quarter and entered the fourth with a 37-27 lead.

However, the Bears began picking up momentum in the fourth behind freshman Jordynn Dudley. The guard had been kept quiet in the first half and limited to just two free throws, but in the fourth she led the Cambridge comeback.

Dudley scored four of the Bears’ opening seven points in the period, and a contested bucket from the Bears’ Angelina Cofrancesco cut John Creek’s lead to 41-36 midway through the quarter.

The teams exchanged scores, including a 3-pointer from the Bears’ Kennedy Daniels, to put the margin at 47-41 with 65 seconds remaining. After three called jump balls, a Johns Creek turnover and missed free throw from the Gladiators’ the Bears had just 18 seconds remaining in their comeback bid.

A three that would have cut the margin to one possession was missed, however, and two made free throws from Tanguilig sealed the win.

In a tweet following the game, Cambridge head coach Lesley Broadwell said she was proud of her team for what they have accomplished this season, and especially the team mindset and character her squad has. She said the Bears were close against Johns Creek, but “could never quite get that run we needed.”

“An awesome opportunity awaits us in the state playoffs, and after a little rest we are back to work to make [Bears] country proud,” the tweet said.

Johns Creek and Cambridge entered the finals behind notable semifinals games on Friday night. The Gladiators dominated tournament No. 1 seed Alpharetta, 46-18, and Cambridge received a buzzer-beating layup from Dudley to advance the Bears to the finals over Pope.

Both teams will host in the first round of the state tournament, which takes place Feb. 14-15.

After a rough stretch in January in which Call said the Gladiators lost their way, he said the last two weeks his squad has been dialed in.

“We had a little chip on our shoulder,” Call said. “We wanted to come into this weekend and do what we are capable of doing, and they answered the bell. I’ll take this group over anybody. When they fight together, play defense and play the way we do, we are going to give ourselves a shot at anybody.”