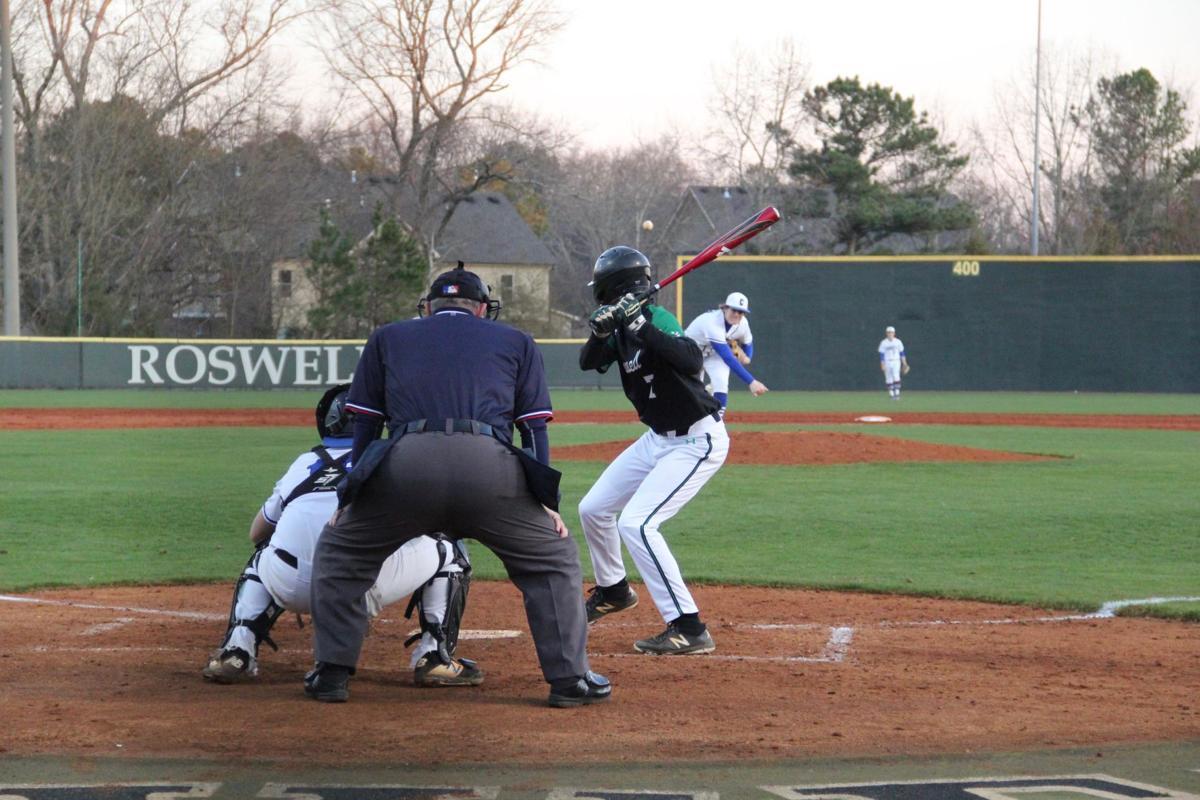 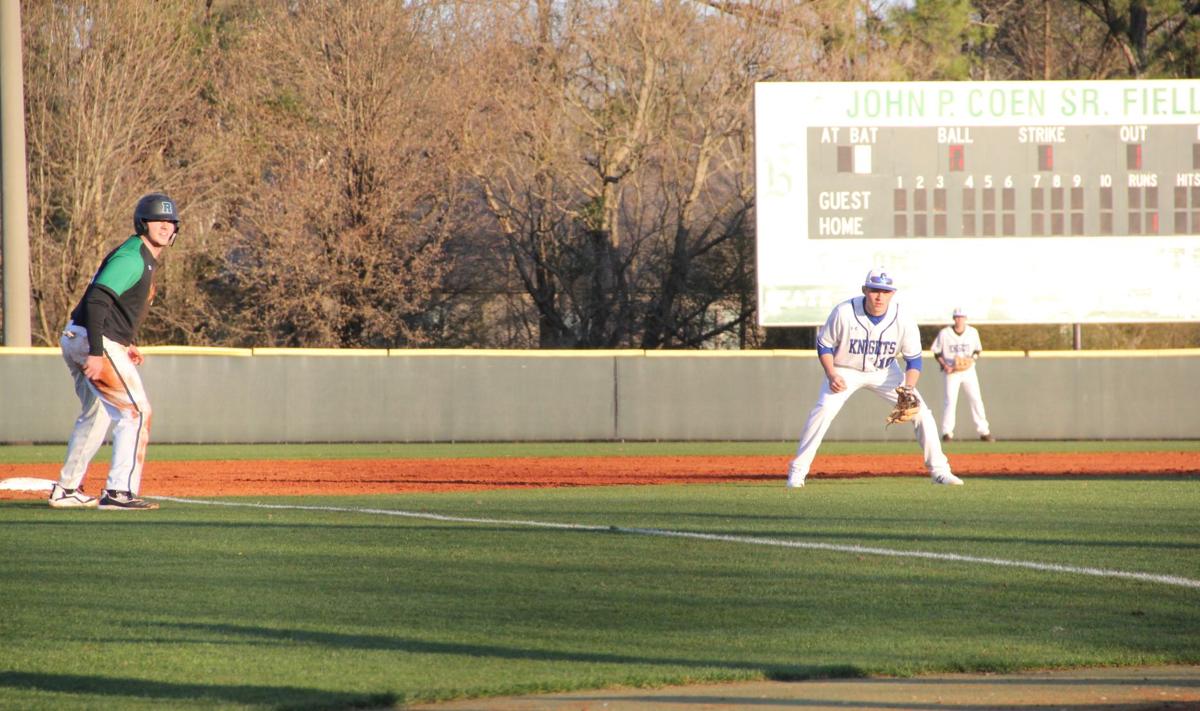 Roswell senior Carson Koporc leads off on third base as Centennial third baseman Lane Campbell prepares for the pitch.

Roswell senior Carson Koporc leads off on third base as Centennial third baseman Lane Campbell prepares for the pitch.

ROSWELL, Ga. — Roswell baseball continued its strong start to the season by taking down cross-town rival Centennial on Friday and improving to 4-0.

Centennial got on the board first after Aidan McConnell and Peyton Sperier doubled in the top of the half of the first inning. Both wound up scoring on wild pitches, giving the Knights an early 2-0 lead.

After a shaky first inning, Roswell senior Luke Osthoff settled in on the mound and retired eight straight Centennial batters. Osthoff helped his cause at the plate with a leadoff double in the second inning to help the Hornets pick up two runs and even the score.

The Knights re-gained the lead in the top of the fourth inning due to a litany of errors in the field by the Hornets. Manuel Del Rio reached base on an infield error and quickly made his way around the bases due to two more errors by the Hornets.

In the bottom half of the inning, Roswell made up for its transgressions in the field in a major way. The Hornets batted through their lineup, picking up five runs off four hits in the inning to take a 7-3 lead.

Wesley Hall’s night ended after 3.1 innings on the mound for the Knights, a performance Centennial head coach Matthew McCarthy noted was certainly not his best.

Osthoff pitched six innings for the Hornets, giving up four hits and striking out nine batters in the win. Jack Moore pitched in relief to earn the save.

Though the season is in its infancy, both Roswell and Centennial have high hopes for the year after finishing with losing records in 2019.

“I feel good,” Centennial head coach Matthew McCarthy said. “We have a great group of kids. We rely heavily on our pitching, and it kind of let us down tonight. It just wasn’t a good start from Wesley Hall, who’s going to be one of our horses all year long. I guess it’s just one of those early moments learning, but we like this team a lot. There’s a lot of good kids, and I think we’ll have a good season.”

The Knights (4-2) pitching staff is led by seniors Hall and Will Haberstock. Junior shortstop Peyton Sperier is steady in the field and one of the Knights best hitters, McCarthy said. The head coach also likes the outfield play from Parker Sperier, Aidan McConnell and Haberstock, despite minimal practice reps in the field.

“We’ve practiced twice out on our field it feels like,” McCarthy said. “We really haven’t been outside a lot. Luckily we’re back on track with the schedule. It’ll be nice to get in the groove and actually be able to practice some defense.”

Roswell has put in a group effort early in the 2020 campaign, and that’s keyed their 4-0 start to the season.

Osthoff should have more performances like the one against Centennial, his second win of the season. Senior Kyle D’Amour has held it down at shortstop, giving up his first error of the season against the Knights. Second baseman Evan Friedman also notched a first against the Knights — his first varsity hit. With bases loaded in the bottom of the fourth inning, Friedman roped the ball down the foul line and drove in two runs.

“It’s still early,” Sutter said. “Like Coach McCarthy and I were talking about earlier, anytime you can get out on the field at this time of year it’s good.”