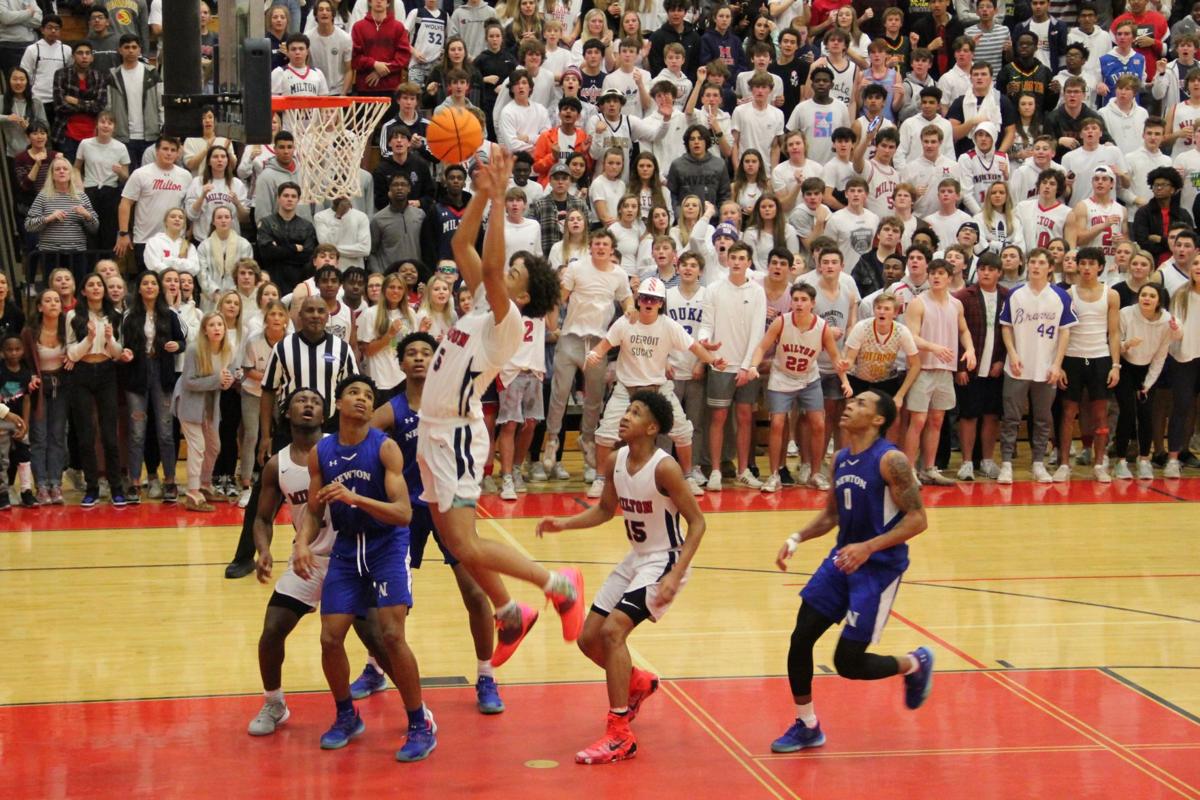 Milton's Cameron Walker (5) goes up for a rebound and put-back score against Newton in the Elite Eight. 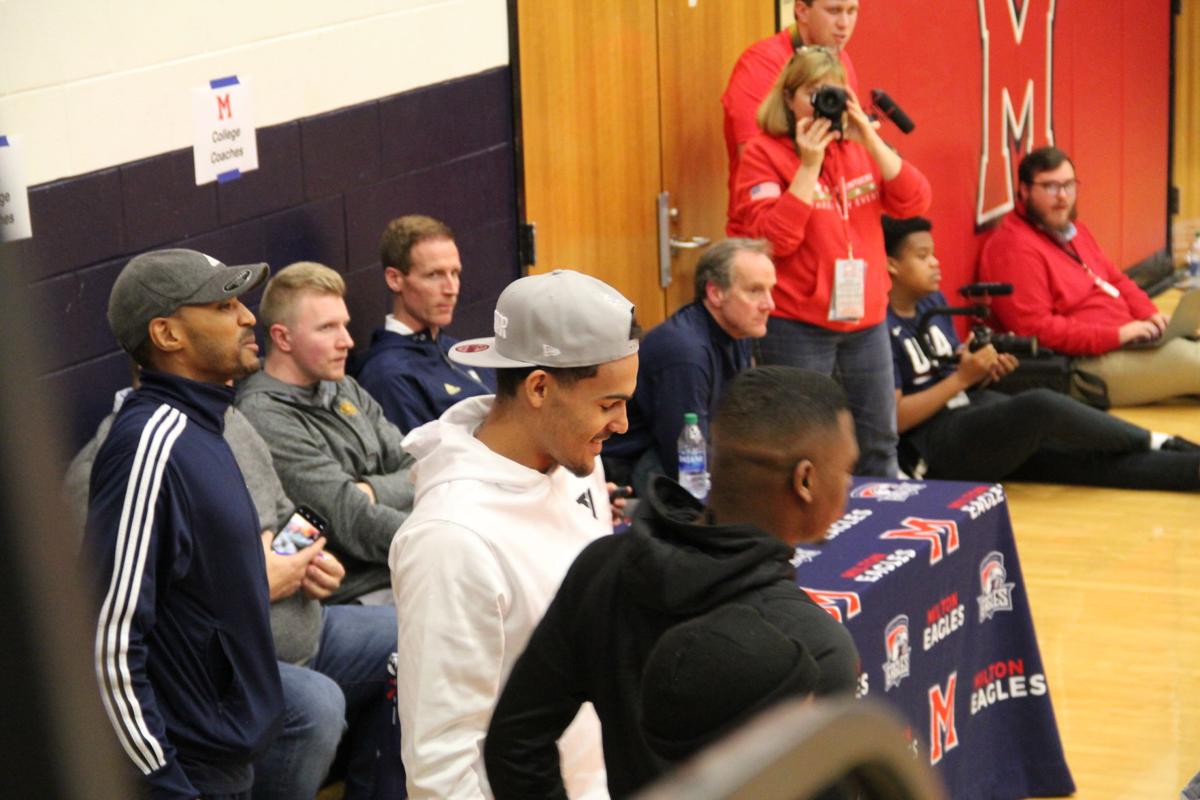 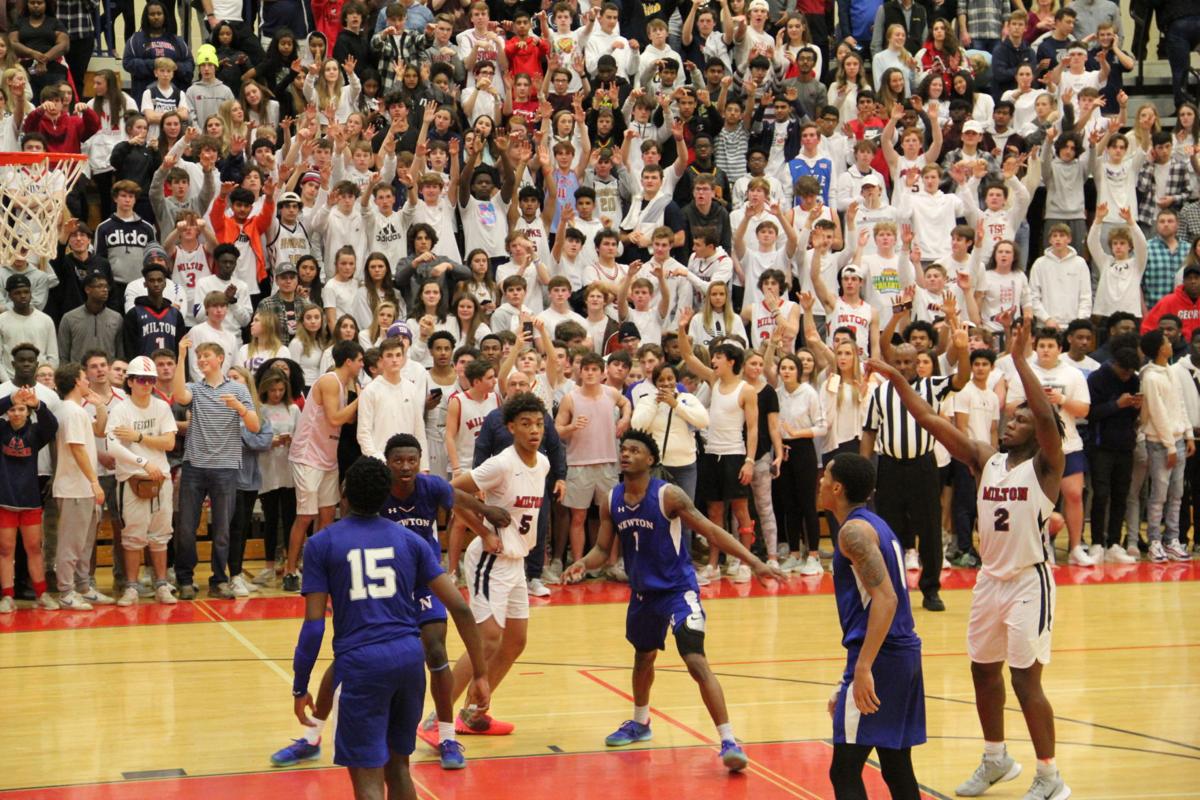 Bruce Thornton (2) shoots a free throw during the fourth quarter of Milton's win over Newton.

Milton's Cameron Walker (5) goes up for a rebound and put-back score against Newton in the Elite Eight.

Bruce Thornton (2) shoots a free throw during the fourth quarter of Milton's win over Newton.

MILTON, Ga. — The atmosphere inside the Milton gymnasium was unlike that of any other home game of the season, and perhaps unlike any other home game in Milton history, as the Eagles defeated Newton to advance to the final four of the Class 7A state tournament.

“It was unbelievable,” Milton head coach Allen Whitehart said. “It was state-championship level. We knew when they were coming in that it would be this level. They’re well-coached, and they’ve got phenomenal players and athletes. We knew it was going to be high-energy.”

With a trip to the semifinals on the line, Newton’s fans traveled well from Covington and came close to out-numbering fans of the Eagles.

Then, a few minutes into the game, Atlanta Hawks point guard Trae Young entered the building and took a seat next to the Milton bench. Young tweeted earlier in the day that he was considering going to watch a local high-school game for the state playoffs.

While Milton and Newton fans alike were hopeful Young would be in attendance, nobody knew for certain which game the Hawks star would be going to. The moment Young came through the doors and walked to his seat, the Milton gym erupted into a frenzy. The student section chanted Young’s name, and young children sprinted from their seats and surrounded the NBA star in hopes of getting an autograph from the 21-year old NBA All-Star.

There was still a game to be played, though, and players from each side were locked in with their eyes on a trip to the final four.

After trading baskets throughout the first half the Eagles led Newton at halftime, 30-25. Milton senior Evan Hurst scored 10 points in the half, and freshman L.T. Overton grabbed 10 rebounds.

The intensity picked up right where it left off after the break. The Rams, led by Georgia Southern signee Caleb Byrd, charged back and took a lead for the first time since the opening minute of the game.

The Eagles responded with a quick 8-2 run to end the third quarter and retake the lead, 47-42.

Despite the Rams’ best efforts, they were unable to catch up with the Eagles in the fourth quarter. The rebounding effort of Overton combined with the knockdown shooting of Milton sophomore Bruce Thornton put the game on ice for the Eagles.

Thornton went 10-for-10 from the free-throw line in the fourth quarter, scoring 16 points total in the fourth and 23 points in the second half. Overton finished the game with 10 points and 18 rebounds.

“L.T. was a man amongst boys,” Whitehart said. “I don’t know how many rebounds he had, but it was a lot. And our kids did what they needed to do to win. All night, they answered the bell. They would pull it close and we would answer. That’s all we ask for.”

After defeating the Rams, Milton returns to the final four for the first time since 2016 and the first time in Whitehart’s tenure with the Eagles. A trip to the state championship will be on the line Saturday when the Eagles head to Buford to play the winner of Wednesday night’s matchup between Wheeler and Berkmar.

“We’re unbelievably excited,” Whitehart said. “You never know if you’ll get back. We talked about Dan Marino going to the Super Bowl as a rookie and never going back. You’re never guaranteed, so you got to take care of what’s in front of you.”