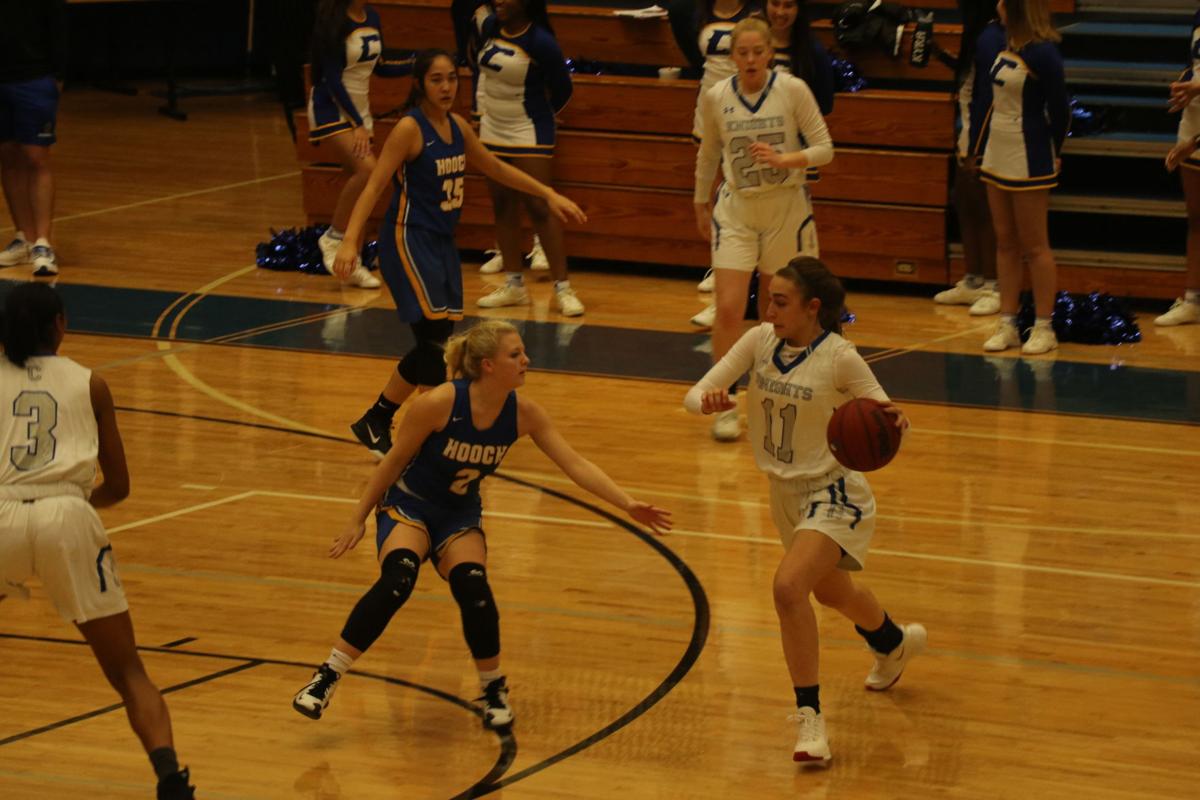 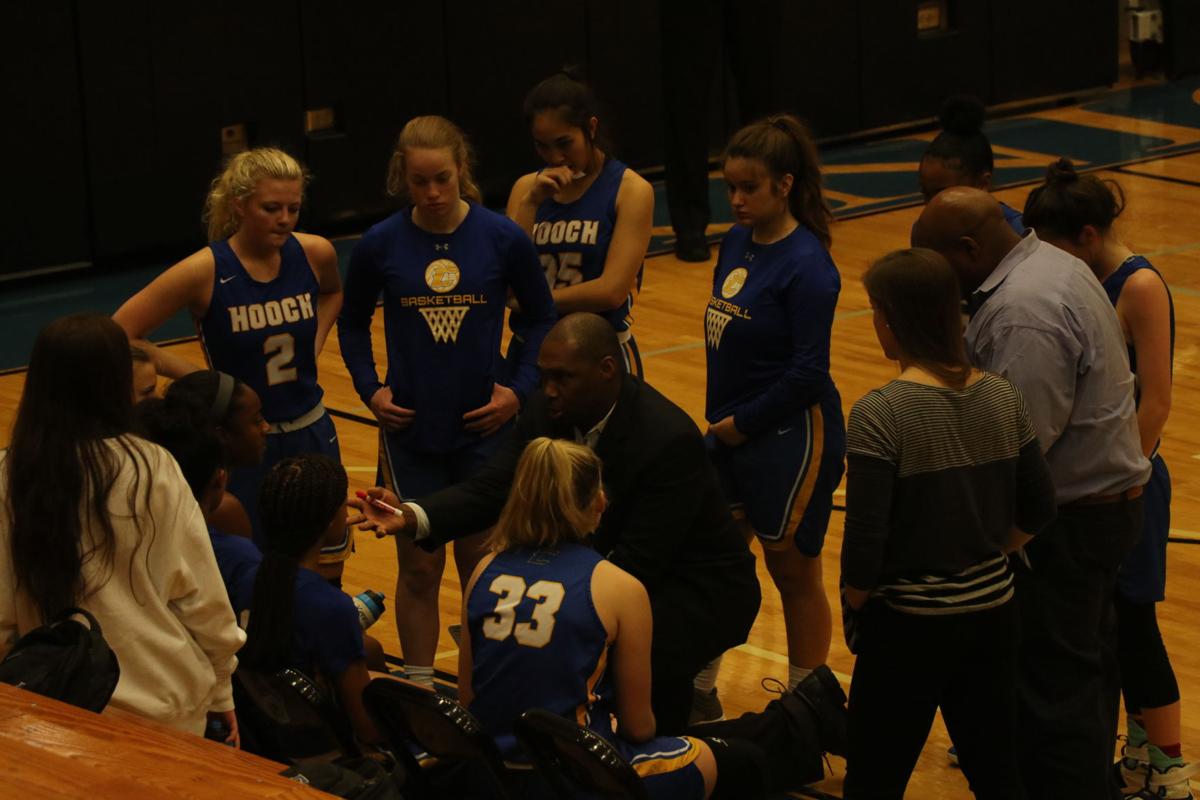 Chattahoochee head coach Lorenzo Withrite talks to his team during a timeout. 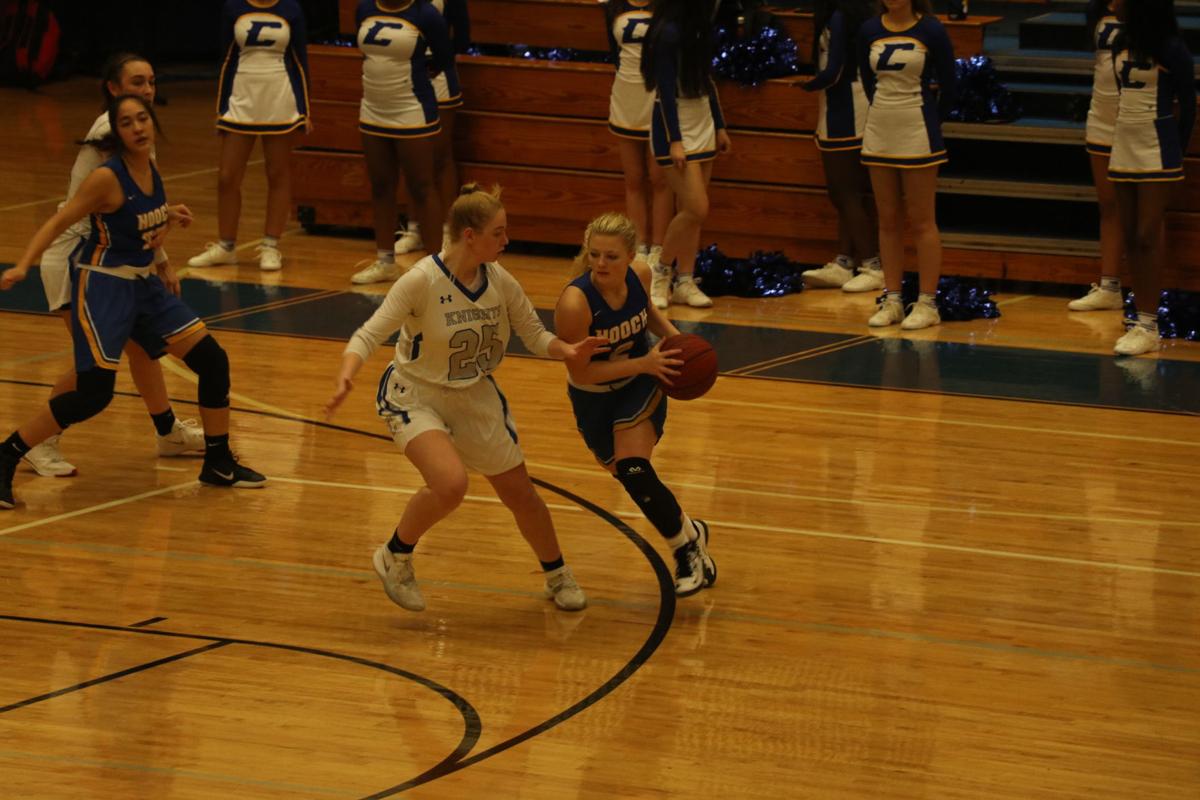 ROSWELL, Ga. — Centennial girls basketball has not had the year they wanted up to this point in the season. Injuries have kept talented senior Divine Guthrie on the bench, and others have played through minor injuries and twisted ankles, such as senior guard Bailey Hebermehl.

With top players out or playing below 100 percent, the Knights got off to 2-7 start in region play and entered their matchup Friday against Chattahoochee on a 5-game overall losing streak.

But if the Knights (5-14, 3-7) are to raise some eyebrows in the final weeks of the regular season and into the 7-AAAAAA tournament, their dramatic win over Hooch could be the catalyst.

Centennial battled with the Cougars (2-16, 1-9) throughout the low-scoring affair, reclaimed the lead in the final minute and held on to notch their third region win of the season.

“It’s been one of those years with injuries and all the other things, and these girls just keep fighting,” said head coach John Domville. “They played so hard with a short bench, they just had each other’s back. It’s all credit to them. We’ve had a really talented group of freshman who have held us up, and the other girls are playing 32 if they have to. It’s a special group.”

The Knights trailed 24-23 in the final minute when senior guard Grace Dulion came away with her fourth, and most vital, steal at midcourt. Dulion’s play set up two free throws for junior Amina Akosa. The junior guard made both shots to give Centennial a 1-point edge with 41 seconds remaining.

After an empty possession from Chattahoochee, Knights’ freshman Summer Hinkle missed a 3-pointer with around 15 seconds remaining on the clock, and Hooch came away with the rebound.

A long three from Hooch’s Lilly Phillips missed the mark, and Akosa got the rebound and again went to the free-throw line. She made the first shot of her 1-and-1 but missed the second to keep the score 26-24.

Hooch rebounded the ball in from midcourt with 3.3 seconds left looking for the win. However, a 3-pointer from Mary Troyer was off the mark, allowing the Knights to secure the thrilling win.

“Region wins are always huge,” Domville said. “In the regular season it’s all about seeding for the region tournament where we can go in there and do what people don’t expect us to do.”

Chattahoochee held the advantage in the first quarter and took a 6-2 lead into the second. The Knights had greater offensive success in the second period and outscored Hooch 10-2.

The squads exchanged scores throughout the third quarter, with a 3-point play from Hooch’s Autumn Cotton giving the Cougars a 4-point lead, the largest by either team in the second half.

The Knights trailed 22-18 midway through the fourth period, but three straight point from Hebermehl cut the margin to a single point with two minutes left. The teams exchanged the lead twice over the next minute before the Knights sealed the game.

Akosa led all scorers with 13 points and added nine rebounds and two steals. Hebermehl had five points with two rebounds and Dulion compiled four rebounds and four steals for Centennial.

Hooch was led by six points from Kati Chatton with Leana Abebe, Phillips and Cotton netting five. Abebe and Cotton each had four rebounds.

Centennial, seventh in the region standings, has six games remaining in the regular season ahead of the 7-AAAAAA tournament.

“We have six seniors, and we are trying to send them out on a high note and have fun, get back to the basics of why they play,” Domville said. “As coaches they are the ‘why’ we show up. So hopefully they can start having some fun.”

Chattahoochee dropped to 1-9 in region play with the loss to put the Cougars at eighth in the standings.