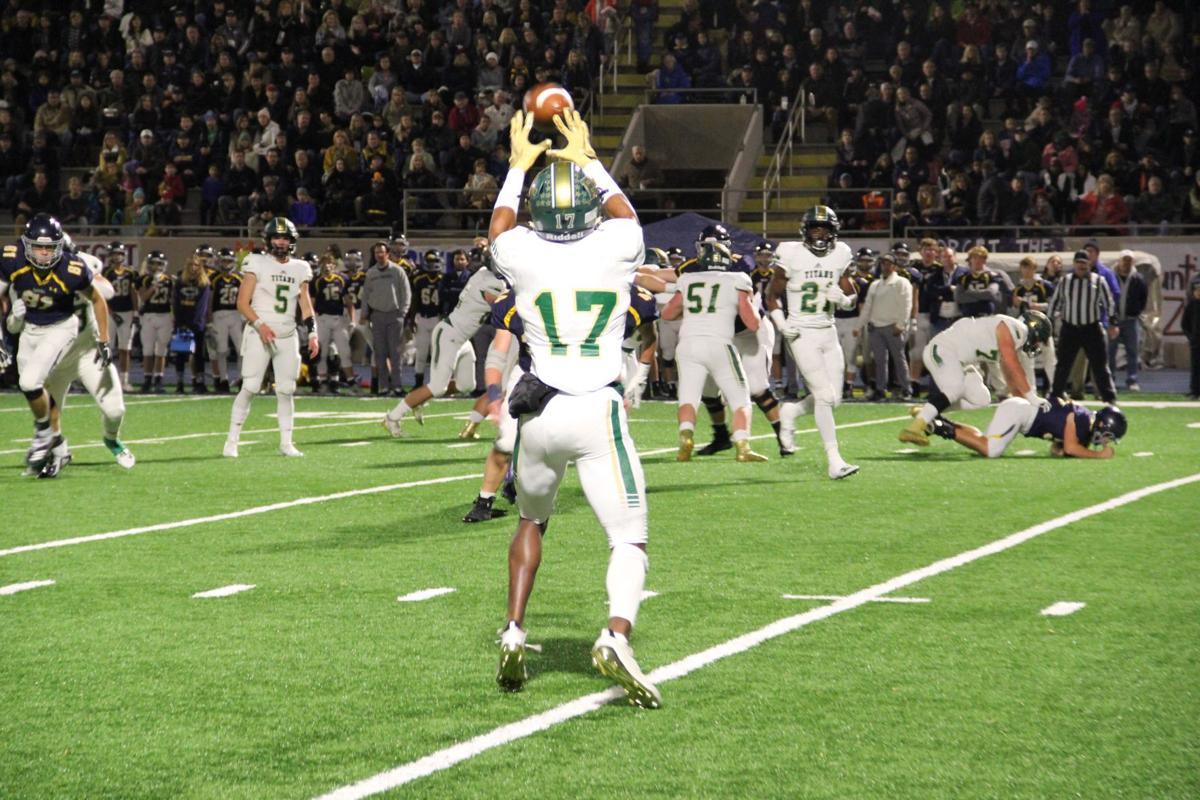 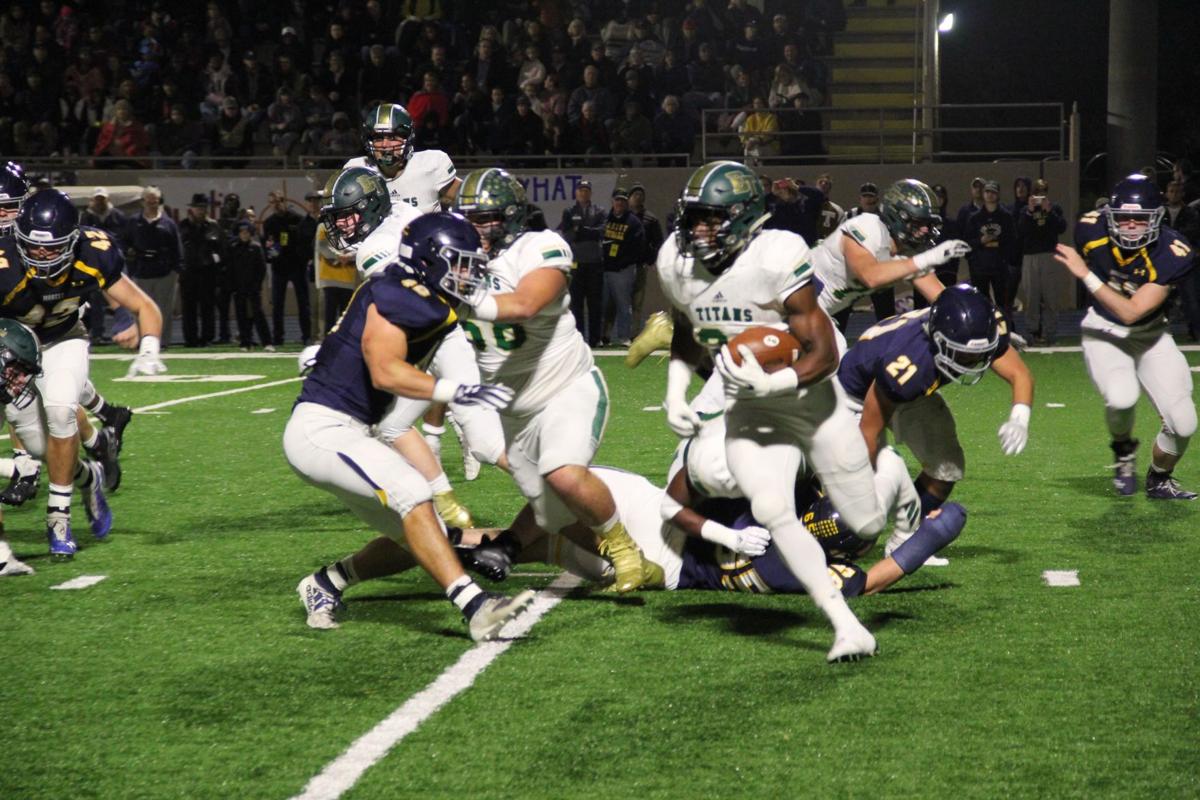 Blessed Trinity running back Elijah Greens runs the ball in the Titans' 33-30 win.

Blessed Trinity running back Elijah Greens runs the ball in the Titans' 33-30 win.

ATLANTA — Blessed Trinity and Marist have met on the gridiron only a handful of times in history, but the storied programs put on a show each time they face off. In the most recent installment of the budding rivalry, Blessed Trinity defeated Marist 33-30 in triple overtime to capture the region title and secure a No. 1 seed in the state playoffs.

The star-studded backfield of Elijah Green and Justice Haynes each had one touchdown, and senior kicker Aaron Werkheiser finished the night 4-4 on field goal attempts (28, 40, 25, 43 yards) and 3-3 on extra-point attempts.

“So much heart, I’m so proud of our kids,” McFarlin said. “There’s not enough words to describe it. This was two really good football teams. If we can all stay healthy, I don’t know, maybe we’ll see them again. That game could have gone either way. That was two teams that didn’t have a lot of gas left in the tank.”

After four quarters weren’t enough to settle the score, the teams headed to overtime to settle who would take home the region crown.

Tied at 20, the Titans began with the ball in overtime, but they were unable to find the end zone. Werkheiser hit a 25-yard field goal to put BT ahead. After Marist tied it with a 28-yard field goal, the battle went to a second overtime period.

Marist started with the ball, and the War Eagles worked their way from the 15-yard line down to the 1 before quarterback Connor Cigelske snuck in for a touchdown.

Facing third and long and needing a touchdown to extend the game, BT junior quarterback Duncan Reavis dropped back and threw a high-arching pass to the back corner of the end zone. Senior James Bryant jumped up over two Marist defenders and came down with the pass as the away crowd roared. After Werkheiser converted the extra point, the game advanced to triple overtime.

Once again it was Werkheiser who came through for the Titans, capping his night off with a 43-yard field goal that would go on to be the game winner.

On the War Eagles’ possession, Cigelske was picked off by senior Quinton Reese to seal the victory and a region title for the Titans.

“We weren’t supposed to be here,” McFarlin said. “We just graduated the best senior class in the history of the school. We lost the entire defensive staff, five coaches left. This group of seniors didn’t have a winning season in ninth grade or JV. They heard all that. I’m just glad they didn’t listen. I’m speechless. I’m just so proud of these kids.”

The War Eagles (9-1, 5-1) were largely considered the top team in Class 4A entering the matchup with the Titans and entered the game sporting a No. 1 ranking and an unblemished record.

On the first play of scrimmage, Marist quarterback Connor Cigelske kept the ball himself and took it 77 yards down the sideline. Two plays later, Cigelske ran for a 2-yard touchdown to give the War Eagles the lead less than one minute into the game.

Blessed Trinity responded quickly, driving 82 yards and evening the score with an 8-yard touchdown run by Green, a senior North Carolina commit. On their next drive, freshman Haynes broke free for a 90-yard touchdown run to put the Titans up 14-7.

After field goals from both teams closed out the half, Blessed Trinity took a 17-10 lead into halftime.

The Titans came out in the second half with their foot on the gas pedal. Green rushed for 39 yards on the first play of the half, and Werkheiser capped off the drive with a 40 yarder to give Blessed Trinity a 20-10 lead.

Marist wasn’t done, though. The War Eagles responded to the Titans field goal with a 45-yard field goal and a touchdown early in the fourth quarter to tie the game at 20 and send it to overtime.

“They had beaten some teams badly during the season that we struggled with,” McFarlin said. “I was glad to see us get a two-score lead in the first half. We felt like if we could just keep it tight going into the fourth quarter we could find a way to win.”

Blessed Trinity plays its final regular season game on Nov. 8 at White County. When the state tournament begins the following week, the Titans will host the No. 4 team from Region 5. Another battle with Marist is possible, as McFarlin mentioned, but only if both teams make it to the state championship game, which was the case in 2017.

Roswell girls ousted from playoffs by No. 8 ranked Falcons

Great article as always, Mr. Parker! BTW: that's my son pancaking a blocker in the picture!