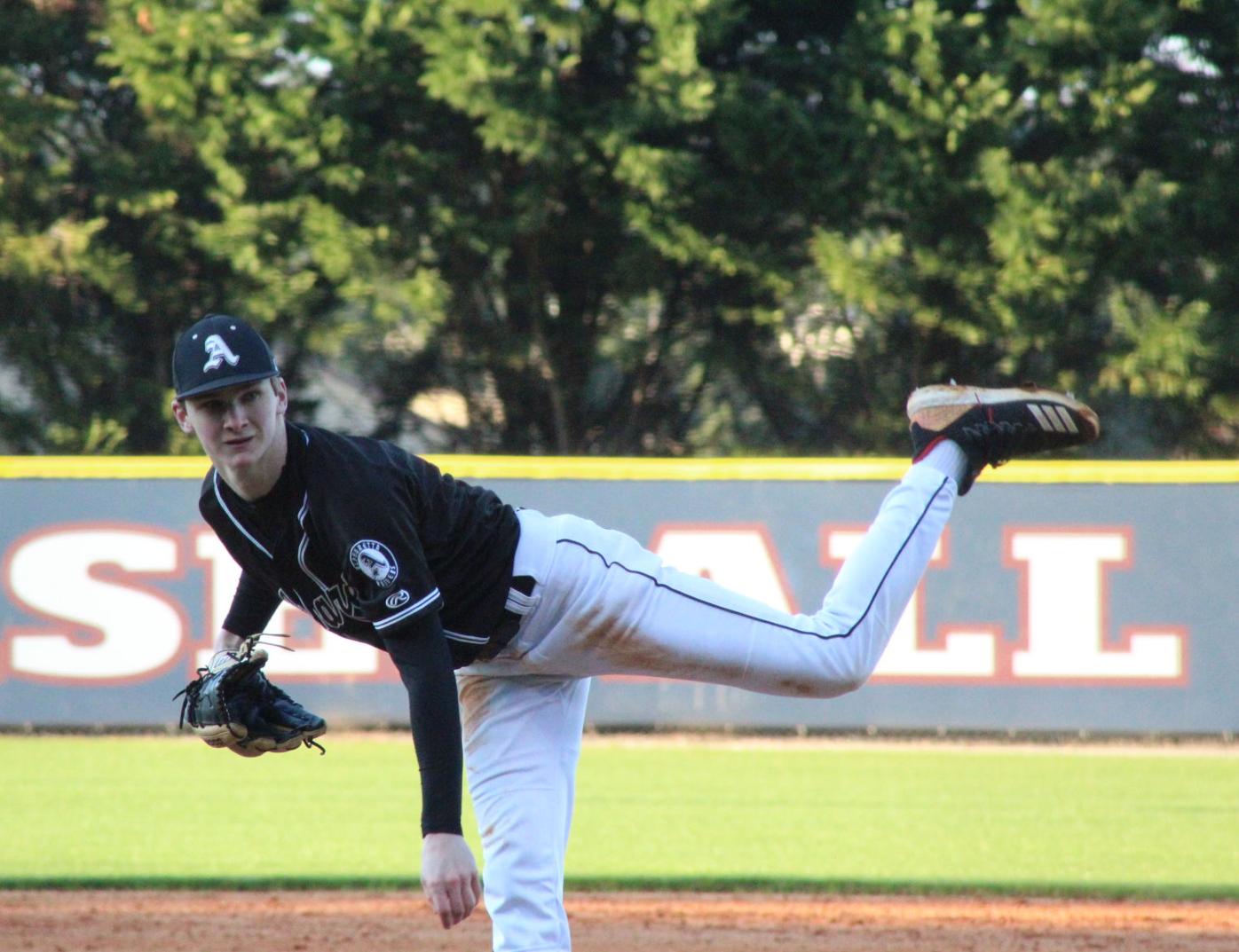 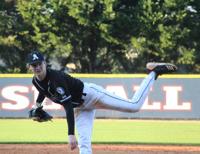 Alpahretta senior pitcher Sam Stratton delivers a pitch against Woodstock. Stratton had an impressive performance with 12 strikeouts, three hits allowed and no walks in seven innings. 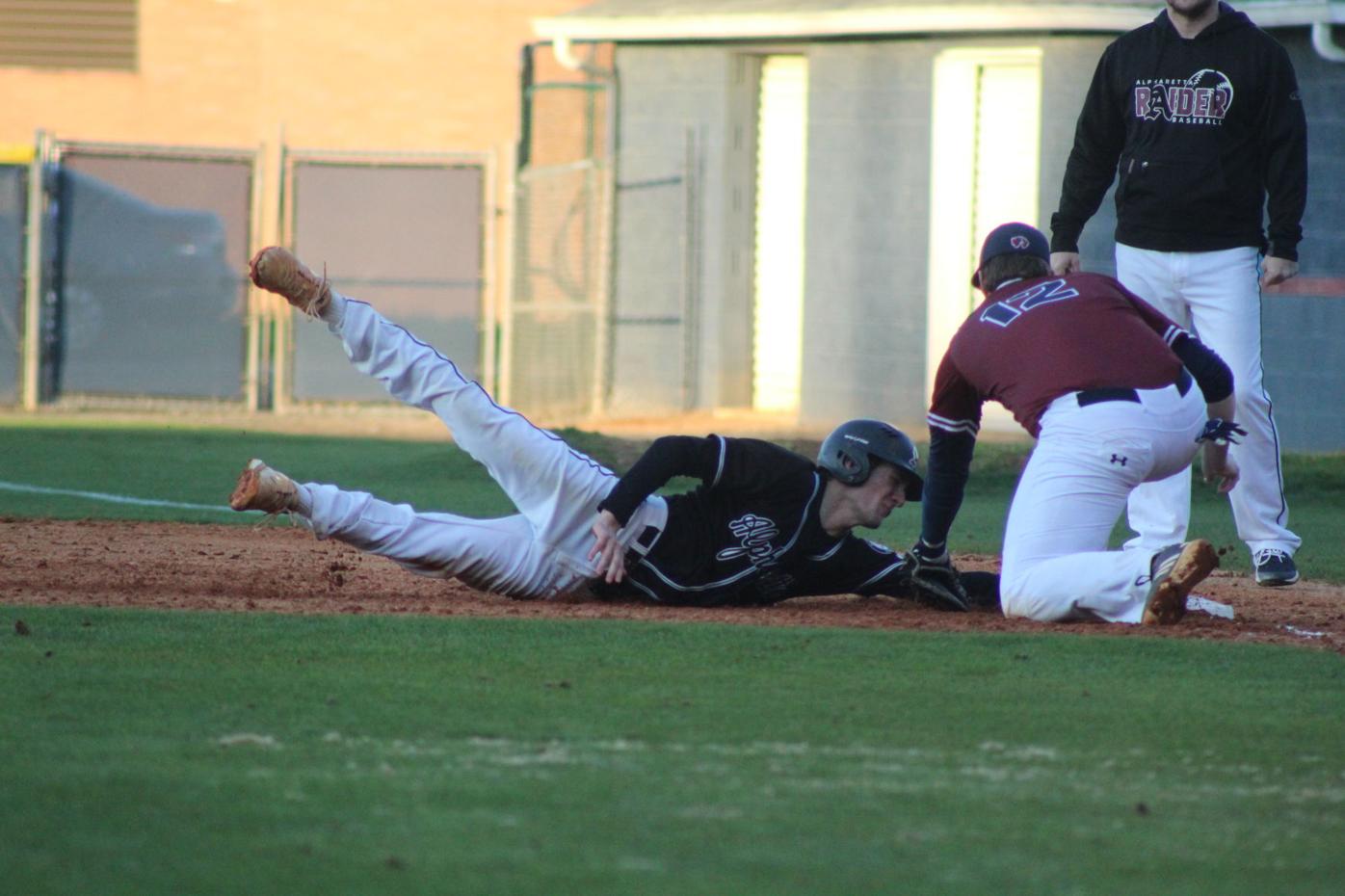 Alpharetta's Jack Barone slides into first base on an attempted pick-off.

Alpahretta senior pitcher Sam Stratton delivers a pitch against Woodstock. Stratton had an impressive performance with 12 strikeouts, three hits allowed and no walks in seven innings.

Alpharetta's Jack Barone slides into first base on an attempted pick-off.

WOODSTOCK, Ga. — Alpharetta baseball’s frustrations to start the season continued Friday with the Raiders falling to 0-4 with a loss to top-10 ranked Woodstock.

The game was not just disappointing to the Raiders in the final score line, but how Woodstock’s game-winning run crossed the plate.

With the contest tied at 1-1 in the bottom of the eighth inning, Woodstock (5-1) had runners at the corners with two outs. The runner on first went to steal, and Alpharetta pitcher Keyton Hughes threw to first to try and force a putout. However, the umpire called Hughes for a disputable balk, and the Raiders argued Hughes was never set. Alpharetta’s protests fell on deaf ears, allowing the Wolverines to take the 2-1 win with the runner at third advancing home with the balk call.

While the final play extended the Raiders’ winless start, head coach Marc Lassiat was well aware that the call was not the sole catalyst for the loss.

“We had a chance early in the game to put them away, we had guys on base the whole time and we just can’t do our job,” Lassiat said. “We’re not moving our runners and getting them in. We outhit them, but if you can’t get them across the plate you’re not going to win games. You can be upset about a bad balk call, but that’s the way it goes.”

Alpharetta opened the game with two hits in the top of the first, but three straight strikeouts ended their scoring threat. The Raiders left a runner on base in the fourth while leading 1-0 but looked poised to extend that lead in the fifth.

Bradley Christian singled to open the Raiders’ half of the inning and stole second and third ahead of Sam Stratton walking to put runners at the corners with one out. However, the Wolverines turned a double play on a grounder from Bryce Troutt to end the threat.

Woodstock took advantage of the squandered scoring chance and tied the game in the bottom of the inning behind two hits.

Those hits were the majority of Woodstock’s offensive success on the night, with the pitching of Stratton serving as a bright spot in the Raiders’ loss. The senior went seven innings allowing just three hits with 11 strikeouts and no walks.

Jack Matty hit a two-out double for Alpharetta in the top of the eight but was left on base. Hughes took over for Stratton on the mound in the Wolverines’ half of the extra inning. After a lineout, Hughes walked a Woodstock batter but rebounded with a strikeout for the second out. A slow dribbler up the first base line allowed Wolverines’ batter Christian Preiser to reach ahead of the game-ending balk call.

Harrison Goldstein drove in Alpharetta’s lone run with a double in the second inning. The Raiders struck out 14 times in 29 at-bats.

While a lack of plating runs has been foiling Alpharetta early in the season, another factor is the weather. Lassiat said his team has yet to see enough practice time because of rain over the past several weeks.

“We are trying to make some adjustments…and that comes with time being on the field and seeing live pitches,” he said.

Despite the inauspicious start, Lassiat is confident his team can turn around its fortunes.

“Our kids are ready to play, we just can’t seem to get on the right side of the column,” he said. “We try to schedule the best, and this is going to do nothing but make us better down the road. We’ll be alright.”