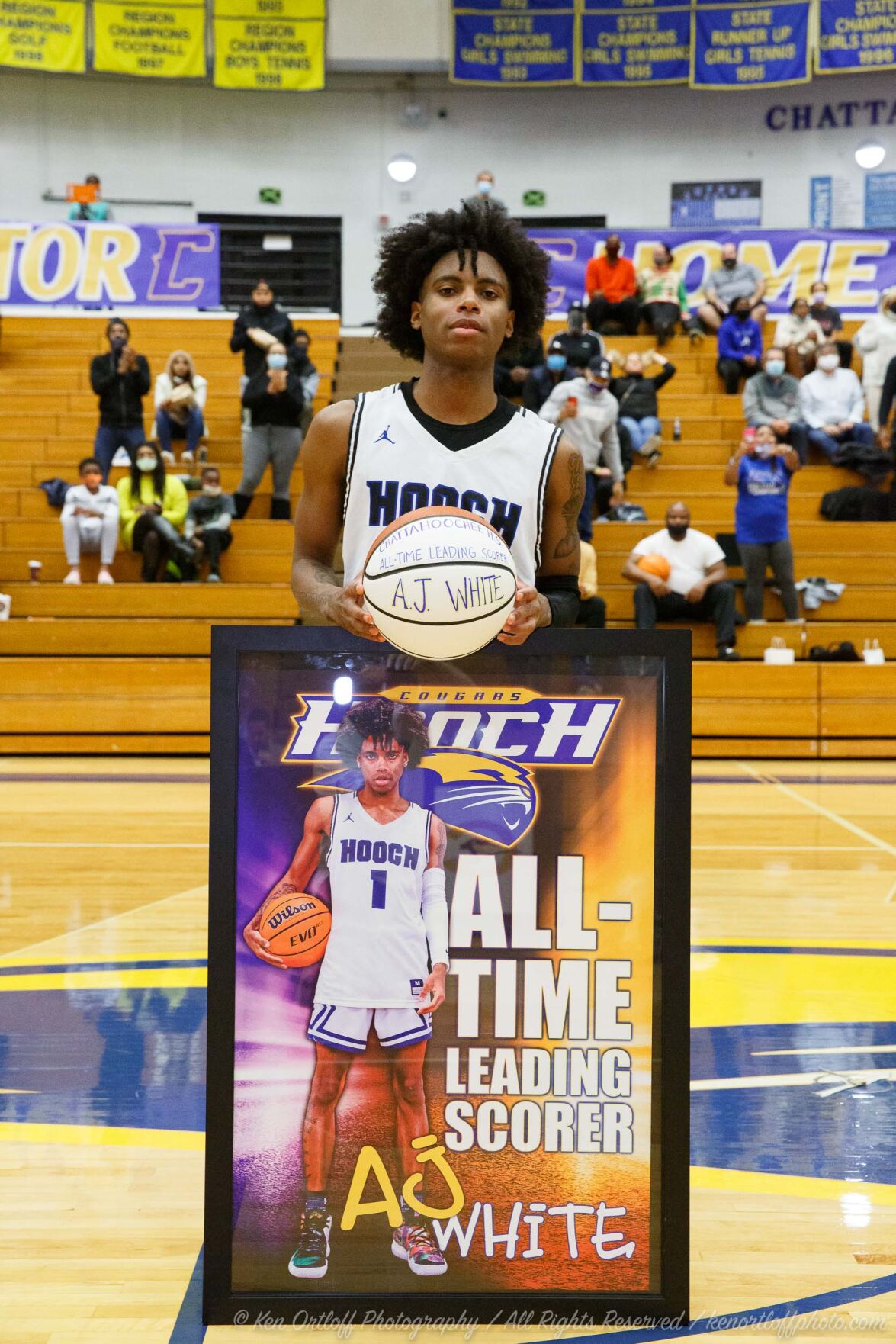 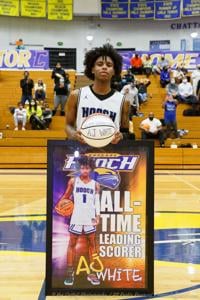 AJ White stands with a poster commemorating the senior breaking Chattahoochee’s career scoring record on Dec. 4. White is set to surpass the 2,000-point just a handful of games into the season. 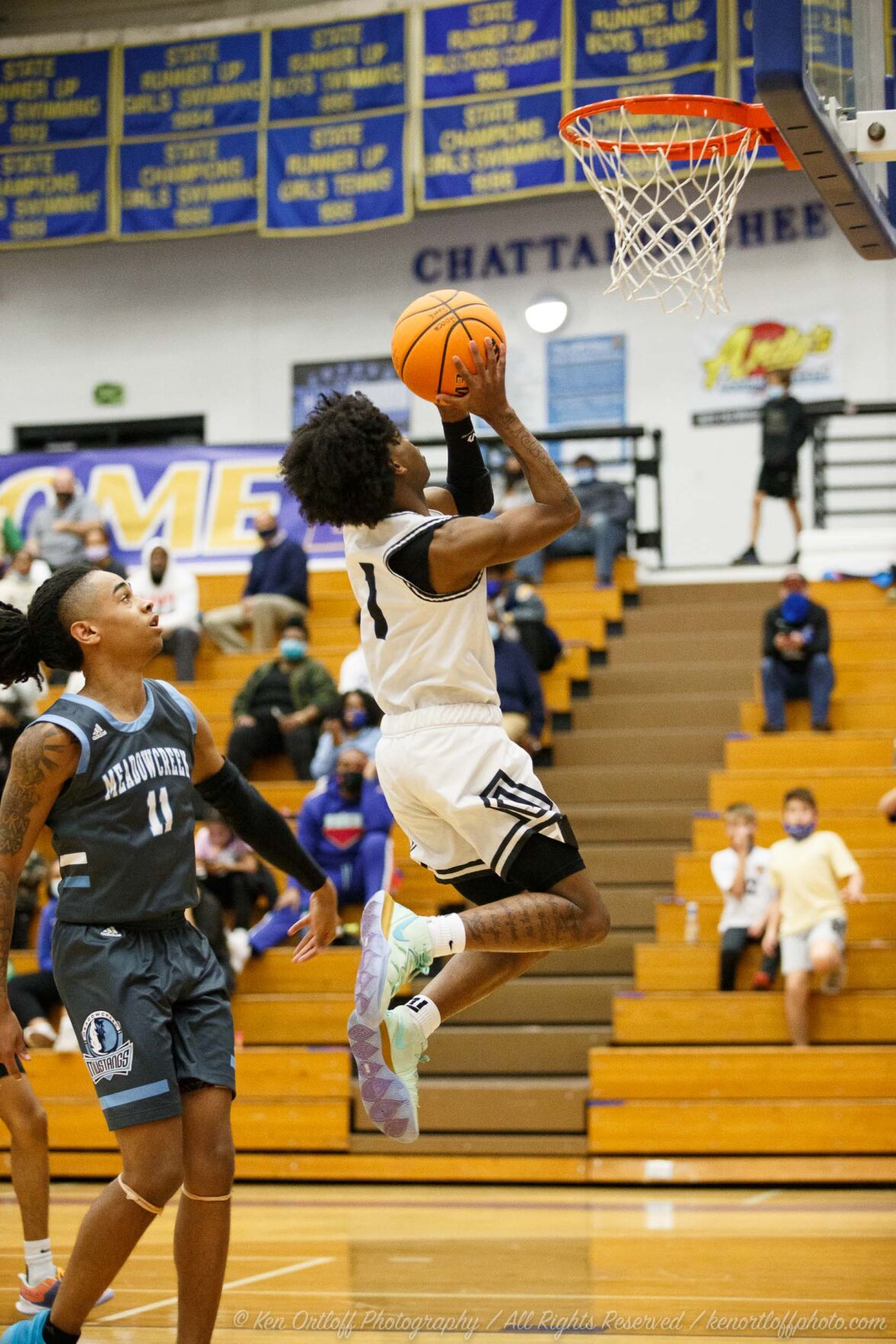 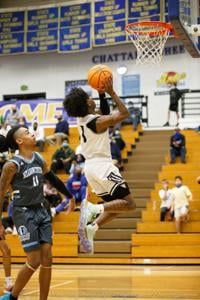 AJ White stands with a poster commemorating the senior breaking Chattahoochee’s career scoring record on Dec. 4. White is set to surpass the 2,000-point just a handful of games into the season.

White recorded a steal, pushed the ball up the court and put in a layup to push his career total at Hooch to 1,938 points, surpassing the previous record set by 2013 graduate Markus Terry.

“It’s a good accomplishment,” White said. “A lot of good players have come through this program, and to break the record, at home, it’s just great.”

Hooch head coach Chris Short called White “Mr. Consistent,” and was thrilled the senior got to break the record.

“To see a guy who has come in, has been a really coachable player, worked hard, done everything he needs to do and bought into our culture, bought into our philosophy, I’m super proud of him,” Short said. “It’s all about him. Our program has helped him, but this is something he had to earn. At the same time, he told me in a text how important his teammates were in him achieving that goal with their support and making him the player he is today.”

White has been a crucial cog in Chattahoochee’s success in recent years. The guard established himself with the team his freshman year, and the Cougars have been winning consistently since. The team went 23-7 in his sophomore season and reached the second round of the playoffs. Last year, White was a driving force in Chattahoochee’s first state championship. The 2019-20 squad went 25-7, captured the Region 7-6A championship and went on to lift the Class 6A state title trophy in March.

Though White is one of the few remaining standout pieces to that championship team, Short said the senior’s game is evolving to make an even greater impact.

“I know what I’m getting as a coach each and every night [from White],” Short said. “I know roughly the number of points and assists he’ll have, but what I am seeing this year is leadership, and statistically his rebounds and steals are up. He’s the guy leading this team now with last year’s group graduating, and he’s putting us in a position to continue that standard.”

White is confident the team can live up to the success of last year’s team.

“We definitely can get back to the spot we were in last year, but there are definitely going to be challenges because we are not that same team,” he said.

White is set to break the 2,000-point mark in Hooch’s matchup with Johns Creek Dec. 11, but with the scoring record now his, he said his focus will be on continuing the Cougars’ undefeated start to the season.

“I’m not going to try and score as much as before, I want to get the team involved more,” he said. “Winning is more important. I just want to win, have fun and try to go back to the state finals.”