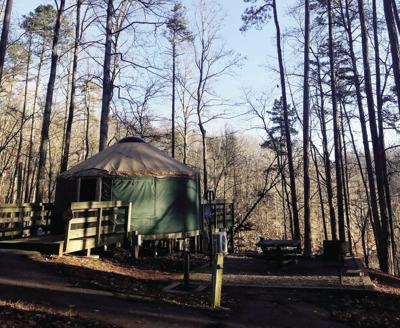 Winter is here. The weather is cold. The old year is gone (thank goodness), and it’s a good time to sit inside by the fire and think about all the things I want to do in the year to come.

For the last few years, one of my resolutions has been to try some wintertime camping. It’s easy to break out the tent in the spring and summer. But come winter, things get complicated. That’s another way of saying it’s cold in the wintertime, and since I’m now over 30, I no longer have anything to prove by spending the night in sub-zero temperatures in a house made of rip-stop nylon.

“I wonder what it would be like to camp in the middle of winter?” I said to Wife of Mine just the other day.

“You mean, like, in a tent?” she said. She has this way of coming right to the heart of things.

“I don’t have a winter-friendly sleeping bag!” I proclaimed triumphantly after a moment’s frantic thought. “So I guess I’d better just stay here by the fire!”

But it wasn’t gonna be that easy.

“That’s true,” she said. “But you do have those gift cards. Besides, Nathan did it. If he did it, you can too.”

Nathan’s our youngest, and the fact was that he had been wintertime camping twice in the last few weeks.

Being the highly trained reporter that I am, I decided to put on my interviewer’s hat and call him on the phone and uncover the truth about wintertime camping.

“So where did you go first?” I asked him.

Cloudland Canyon State Park, he told me, explaining that he camped there with a couple of his friends, experienced campers who were knowledgeable in the ways of winter in the woods.

“They have the right gear,” he said. “That was good, because it snowed.”

Snowed? As in frozen water falling from the sky?

Aha! Surely that would be enough to provide an out!

“So you were worried you’d freeze to death?” I asked. “You were concerned lest you not survive the knife-edge bite of winter cold?”

“No, it was really pretty warm,” he said. “We had a good tent, and I had a good sleeping bag with an extra blanket on top. I stayed pretty warm, actually, and it was kind of neat to be out there in winter on winter’s terms.”

That wasn’t helping me much. So I asked about his next winter camping adventure, this one at Tugalo State Park in Lavonia, Ga., close by the waters of Lake Hartwell.

“It was good!” he replied. “That time, we camped in a yurt instead of in the tent.”

A yurt, technically, is a tent, but it’s a tent with some differences.

“This one had bunk beds and a pull-out couch — real beds, a real sofa, and a real table,” he added. “It had power too.”

Now that was sounding a little better.

“Yes,” he added, “it sorta had all the benefits of being outside without having to be completely out in the woods.”

“I liked ’em both,” he said, explaining that the tent gave a real sense of being in the woods in winter, while the yurt had more in the way of accustomed creature comforts (and might be better for families with small children).

Bottom line: Would he do the wintertime camping thing again?

“Yep!” he said. “And I hear you might be thinking about trying it, too?”

So, it appears, I am. In fact, as soon as I finish this, it’s back to the web for more sleeping bag shopping (I’ve got to use that gift card for something). My purchase should arrive in a few days. Then I’ll dig out the tent and dust off the camp stove. All that’ll be left will be to pick a place, and Georgia’s state parks offer plenty of choices — and go!

Stay tuned. I’ll let you know how it turns out.