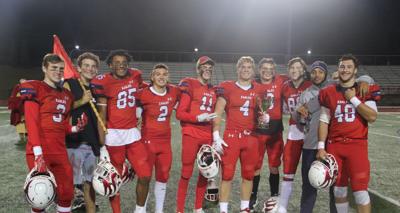 The Milton boys captured its second Region 5-AAAAAAA title in three years Feb. 8 by downing West Forsyth in the region tournament final. Milton compiled a 20-8 overall season but were beaten in the first round of the state tournament.

Cambridge boys basketball captured its first region title Feb. 9, taking down defending champs North Atlanta who denied the Bears the 2018 7-AAAAAA championship. The Bears reached the second round of the playoffs.

St. Francis’ boys and girls teams each swept the Region 6-A tournaments.

In the state tournament, the Knights downed Pinecrest Academy and Savannah Country Day to set up their fourth matchup with region rivals Mt. Bethel, whom the Knights beat to earn the region title.

After a tight win over Mt. Bethel, St. Francis won the program’s third state title with a 73-69 win over Eagle’s Landing Christian Academy.

The St. Francis girls continued their streak of region titles Feb. 9. The Knights went 14-0 in the regular season against its Region 6-A opponents and downed Mt. Paran, 70-63, in the region tournament final.

The Knights reached the state semifinals.

Milton and Cambridge girls tennis teams each reached the finals of the state tournament in May with the Bears winning their second championship in their third straight appearance in the finals.

Cambridge took on Northview in the Class 6A finals for the second straight year after the Titans beat out the Bears for the 2018 title.

The Bears earned their revenge, however, sweeping Northview 3-0 for the championship.

Milton earned its first trip to the state finals after taking down 16-time state champions Walton in the semifinals, and took on region rivals Lambert, which also was seeking its first state championship.

The finals match began May 4 with Lambert jumping out to a 2-1 lead. However, weather postponed the match. When play resumed, Milton took No. 2 doubles in three sets to set up a winner-take-all matchup in No. 1 doubles. The Eagles fell just short of lifting the state championship trophy, falling in the decisive matchup, 6-7, 6-4, 6-2.

Following the 2018-19 season, Cambridge won its first overall Director’s Cup in May. The award is given to the school which accumulates the most points from its best performing girls and boys sports programs throughout the athletic year.

Cambridge’s point total was led by the girls cross-country team repeating as state champs and the girls tennis team winning its second state title in three years. The girls track and field team finished as Class 6A state runner-up, and the swim, gymnastics and cheer team all finished in the top five in state meets in 2018-19.

The boys athletics were led by a podium finish in cross-country, a semifinals appearance in soccer and positive showings at the golf, swimming and wrestling state meets.

Milton girls lacrosse had another dominant season and captured the program’s third straight and 13th overall state championship in May.

The Eagles went 22-1 overall in 2019, notching wins over some of the top lacrosse programs in the country. Milton outscored their opponents by an average of 13 goals per game and downed Mill Creek 20-7 in the state finals May 18.

Milton has not lost to an in-state opponent since the 2016 state finals.

Draft pundits noted Abrams’ speed, which allowed him to compile 100 steals with Blessed Trinity. They also gave him high marks for his success at the plate, consistent fielding and ability to make quick throws.

Abrams signed with the Padres organization and immediately had a significant impact in the minors. The BT grad had the highest average (.401) in the Rookie Arizona League in 32 games played. Abrams had 22 RBIs, 23 extra-base hits and stole 14 bases.

Abrams also appeared in two games in the A league with the Fort Wayne TinCaps.

Milton became the first Georgia high school football team to play a game in the Golden State when the Eagles took on California’s JSerra Catholic Sept. 14.

Milton transported 82 players, its entire coaching staff, support personnel and parents to take in the sights and sounds of southern California ahead of their game. The Eagles spent time on Venice Beach, toured UCLA and held a tailgate party.

Milton took a tight loss in the contest to nationally ranked JSerra, but head coach Adam Clack called the game a “once-in-a-lifetime” experience his players will remember forever.

Cambridge girls cross-country continued its dominance in Class 6A with the Bears earning their third straight state championship in November nine points over Allatoona in second.

The Bears were led by senior Ashley Sechrest who placed fifth, her second straight top-5 finish and third straight top-20 placement in the state finals.

Sechrest was followed by freshman Anna Filipek in 17th and junior Lola Merrill placing 29th overall. Emily Meeker and Camilla Montes also finished in the top-30 to round out Cambridge’s team score.

The GHSA shook up the local athletics landscape in November by announcing the new region alignments for schools beginning in the 2019-20 season. The move has significant implications for local public schools.

Alpharetta will make the jump from Class 6A to 7A and will be placed in Region 5 along with Milton and Roswell. The North Fulton teams will compete against Cherokee, Etowah and Woodstock beginning next athletics year.

While Cambridge will still play in Region 7-AAAAAA, they will have some new opponents. North Atlanta, Pope, Northview and Dunwoody will be replaced by Creekview, River Ridge, Riverwood and Sequoyah. Cambridge’s fellow North Fulton schools — Centennial, Chattahoochee and Johns Creek — remain in the region.

King’s Ridge and St. Francis will continue to play in Region 6-A, but the region will no longer be subdivided into subregions. The Tigers and Knights will compete with Fellowship Christian, Pinecrest Academy and newcomer Lakeview Academy.

The Titans entered the season with a new defensive coaching staff and loads of new starters but remained one of the top teams in Class 4A. The Titans went 9-1 in the regular season and ran the table in Region 7-AAAA play with close wins over three ranked teams, Marist, Denmark and Flowery Branch. BT’s region title was its sixth in seven years.

The Titans won their opening three games of the playoffs in decisive fashion before taking on Woodward Academy, the only team to beat BT in 2019, in the semifinals. After another strong performance, the Titans earned a 46-21 win and secured their fourth trip to the state finals in five years.

BT continued its streak of state titles Dec. 14 with an exciting, 17-14 win over Oconee County. The Titans scored two touchdowns in the final two minutes of the second quarter to take the lead and ran off the final nine minutes of regulation with a 17-play drive that included two fourth-down conversions.

Milton has set the table for a strong year ahead

Each new year provides us with an opportunity to reflect upon our achievements and plan for success in the coming year. The new decade is upon…

Suwanee Companies Team Up to Provide Laptops to Students in Need

There are still monsters in your closet

With COVID impacting so many many events and sports, St. Andrew Rowing is excited to announc… Read more