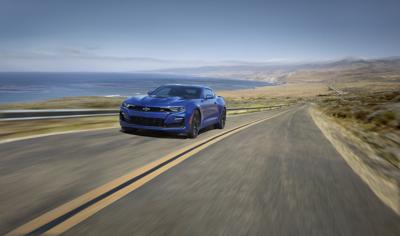 Speed alone does not turn knuckles white. Pace does not equal an adrenaline rush. Velocity is not always enough to expand the pupils.

Hit 120 mph on a runway flanked by empty fields and your heart will race no more than it does when you butter toast.

But when you are traversing a narrow, single-lane road flanked by large trees that twists as tightly as a headphone cord that has spent a day rolling round a pocket, that will raise the pulse. Add on negative-camber corners, mid-corner bumps and potholes aplenty, and just hitting 35 mph can result in a sphincter workout. I know because that’s the kind of roads I traversed in the Camaro SS.

I charged the Camaro through what became my personal mountain track, but seemingly no matter what hurdles the tough-to-tame asphalt threw at the Chevy, it wasn’t going to make all those pines lining the roadway a concern.

The Camaro danced over the uneven pavement, and though a few mid-corner bumps caused it to quickly shimmy to one side, it remained in step. It stayed planted and grippy through corners of varying severity. Potholes, all of which seemed to form out of sight until I was on top of them, were handled immediately and calmly by the magnetic active suspension.

Pony cars just shouldn’t handle this well, but the Camaro laps it up. And its level of performance is made all the sweeter with the burly, howling V8 under the hood and a 6-speed manual to run through the cogs.

Turbocharged engines may have their positive attributes, but there’s nothing quite like the immediate power of a snail-less, direct injection engine in certain situations, including my mountain run. There’s not time to spool a turbo when the next corner is, excuse the pun, right around the corner. But that’s still plenty of time to get the Camaro’s V8 to provide the kind of punchy acceleration that keeps chiropractors in business.

While Chevy’s pony can be had with a four-cylinder or a V6, the V8 is, of course, the enthusiast’s choice and comes along with LT1 and SS models.

The 455-hp powerplant provides a staggering and seemingly instantaneous punch with a peak torque of 455 lb.-ft. that propelled the Camaro from corner to corner in my twisty run with an uncanny swiftness. And each time I depressed the throttle with authority all nearby animals were put on alert there’s a new beast in town, with the V8 and dual-mode exhaust shouting its fantastic soundtrack for all to enjoy.

And in a world of dual-clutch automatics, there is something so fantastically primal and rewarding about going through the gears yourself. The Camaro is happy to oblige, with a 6-speed manual transmission serving as standard kit (a 10-speed is auto with paddle shifters is available).

The Camaro’s manual is engaging to drive, not just for its driver-inputted changes, but also in the way it operates. Pedal travel is long in the footwell, which requires a good bit of leg movement to depress the clutch. It’s a bit of a nuisance in traffic, but when running through the gears quickly, that kick adds another element of excitement.

Throws are neither so easy to be numb, and yet, you needn’t be Mr. America to work the shifter.  And with each gear change comes a brief but satisfying “clunk,” another attribute that keeps the driver engaged.

The Camaro’s looks are also enhanced by a front splitter, rear spoiler and red brake calipers, and 1SS models get a head-up display, which is standard is 2SS offerings.

Though the Camaro shines during spirited jaunts through twisty mountain roads, its practicality falls short of everyday usability.

Outward visibility from the low-slung greenhouse is poor on all accounts, and the rear seats are only such by definition. Sure, they could serve as seats, but not for anyone with the dimensions of human being. More accurately, the rear seats are just a low-sitting rear parcel shelf. Continuing the trend, the trunk opening is also about as spacious as a mail slot. Sliding in even a plump duffel bag takes some grunt. And with the trunk offering just 9-cubic feet of storage space (7.3 in convertible models), a duffel bag is about all you are going to get in there.

Those who can sacrifice a bit of practicality for the sake of speed will be rewarded by the Camaro. And at under $40,000 for an SS model, it also presents a bargain when you consider its performance potential.

That’s not a lot of coin to really get the heart racing.