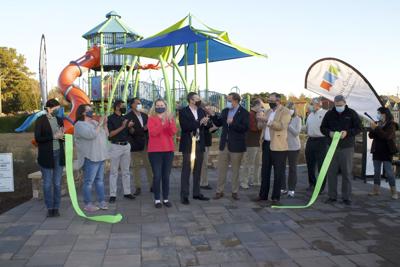 JOHNS CREEK, Ga. — Johns Creek residents have a new park, entirely of their own making.

The City of Johns Creek held a ribbon-cutting ceremony Nov. 18, marking the completion of the 4-acre Morton Road pocket park, the city’s first park it didn’t inherit from Fulton County.

“There's a lot of things that have been completed, but they've been completed in our existing parks,” Mayor Mike Bodker said. “To create a new park from nothing, it's pretty amazing.”

Johns Creek purchased the land from Georgia Power in 2015 and designed and constructed the park. The cost of the park was $2 million and was covered by a special Parks Bond approved by residents.

The pocket park is located on the north side of East Morton Road, just east of its intersection with State Bridge Road. Pocket parks are small parks, typically 4 acres or less. They are designed to serve nearby neighborhoods and tend to be left as green space with the possibility for playgrounds, limited facilities, and little or no parking.

Robby Newton, Johns Creek park manager, explained that the park is within a quarter of a mile of 12 homeowners associations and the goal was really to serve the surrounding community. Newton said that while Morton Road Park is small in size, he considers it to be more of a community park.

“The park is designed to draw people that walk, kids can ride their bikes to it,” Newton said. “It's kind of a destination for the walkers and a nice place where parents can take their kids, sit out at the pavilion and get a quiet moment while other kids are playing on the playground. So you know, it would be more aptly named a community park.”

Newton said the basketball court will need to be sealed and there is still landscaping to be done, but that none of the remaining work should interfere with patrons enjoying the park.

The city’s next park project will be the highly anticipated 195-acre Cauley Creek Park. Construction has already begun at the site and is set for completion in spring 2021.