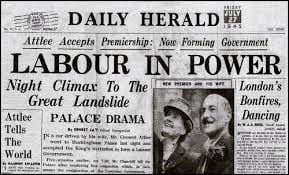 Learn why the English electorate voted for socialism in 1945.

This event has passed

Learn why the English electorate voted for socialism in 1945.

The British Election of 1945: Why Churchill Lost

Our own Bill Fisher will discuss the British General Election of 1945.

The results came as a shocker to many in the world, but Bill will make the case that the world should have seen it coming. He will describe the multiple reasons why Churchill, grandest man on the world stage, was thrown out of office by the people whom he had just saved.