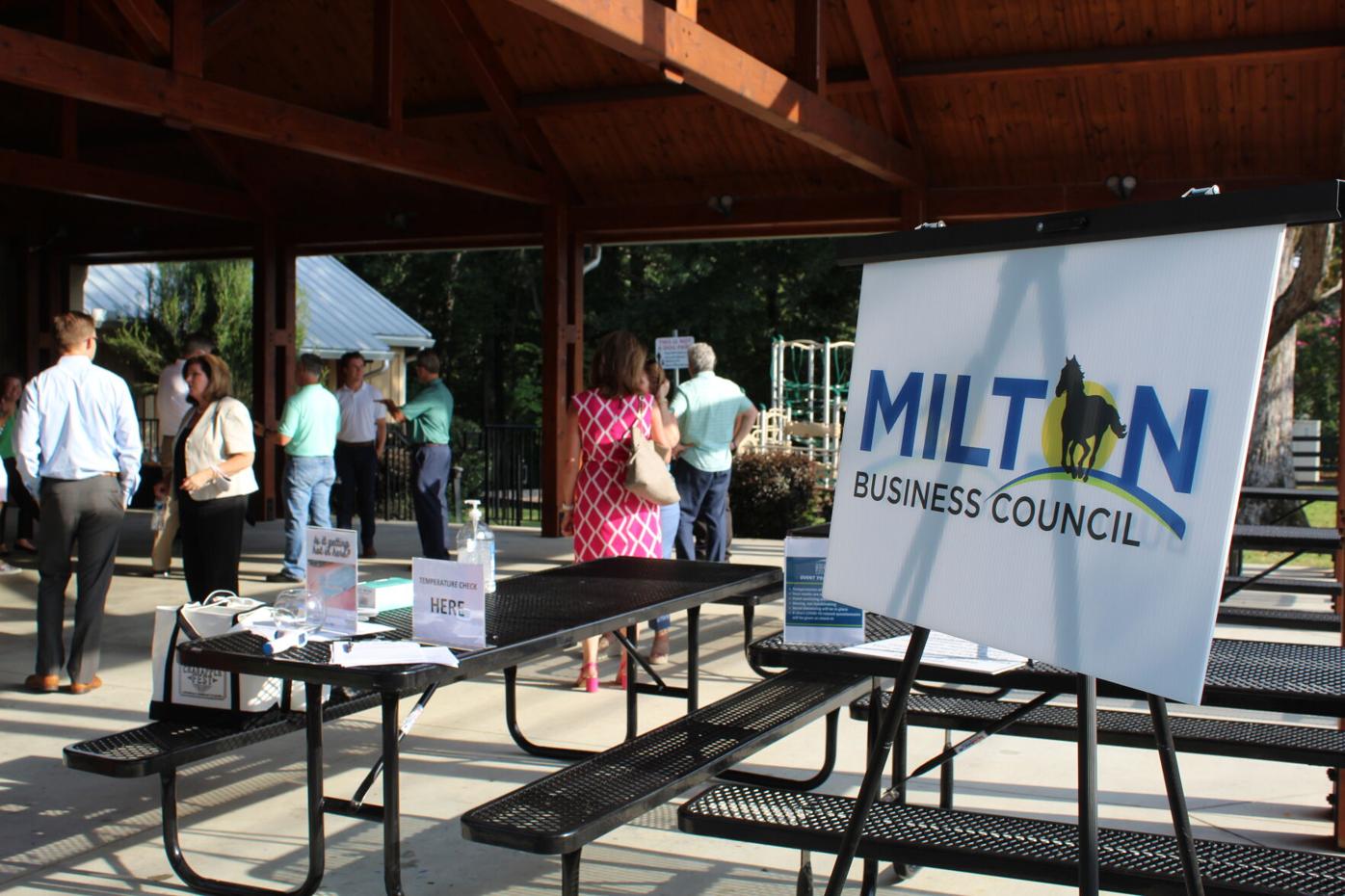 The Milton Business Council held its first event Sept. 1. The council will serve to foster the city's business community under the banner of the Greater North Fulton Chamber of Commerce. 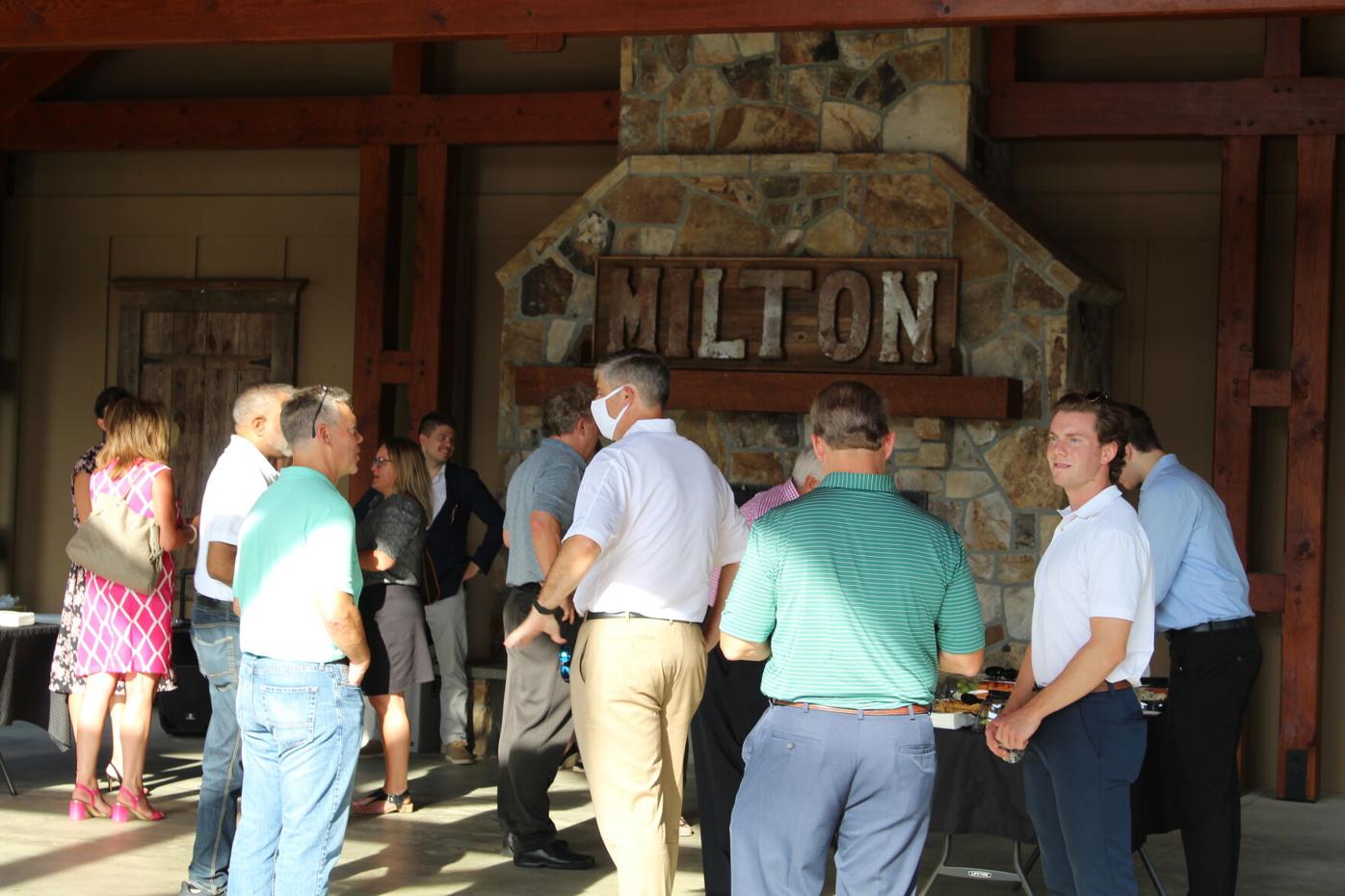 Around two dozen business owners and local officials gathered at Broadwell Pavilion in downtown Crabapple for the event.

The Milton Business Council held its first event Sept. 1. The council will serve to foster the city's business community under the banner of the Greater North Fulton Chamber of Commerce.

Around two dozen business owners and local officials gathered at Broadwell Pavilion in downtown Crabapple for the event.

MILTON, Ga. — Around two dozen business owners from Milton and surrounding cities gathered Sept. 1 to mark a new era for the North Fulton business community with the first event of the new Milton Business Council.

The group, which formally launched earlier this year, is the first city-specific entity to operate under the banner of the Greater North Fulton Chamber of Commerce.

With the coronavirus pushing back the inaugural get-together of the council several months, there was a palpable sense of excitement and relief from Milton Business Council Chair John Herbert.

“It’s so exciting to get it kicked off finally,” Herbert said. “We have been busy during the last six months, we have had some online events, and we have been working very hard with our leadership team to ensure we are building a strong foundation. Our focus this year is on engagement, so it’s nice to be able to put that engagement into practice in our very first event. It’s a real challenge to start a new business organization in the days we are in, but people are hungry for it.”

The new council is being tasked with an interesting proposition — fostering and supporting a business community in a city that is zoned 85 percent residential and has three distinct commercial corridors. However, residents need to look no further than downtown Crabapple and the ongoing construction in the area to see that Milton’s business landscape is expanding.

Perhaps of even greater importance to the council is working with the GNFCC.

The Milton Business Alliance, which predated the council, flew its own flag. The Milton Business Council will still operate somewhat independently of the chamber while having the ability to use its resources, connections and influence.

“Now that we are with GNFCC, we are now connected with the five other cities and their footprint,” Herbert said. “So now, we are able to not only focus on ourselves as community, but take our message out to the other five cities and draw a spotlight on our businesses through the Chamber on what we’re doing here in this city. I think that’s special.”

Hebert said the council will also benefit from having a direct line of contact with their fellow North Fulton companies, and can use some of the examples to craft what could be the future footprint of Milton’s businesses.

“The fact that you now have a business community in that area working together, telling the story about it and attracting new opportunities to come in, it’s really important to the vitality of Milton as it exists today and the future vitality of it,” Ellis said. “It might look different than Alpharetta or Sandy Springs, but it gives them the opportunity to have a unique feel and put their own stamp on it.”

Through its already challenging first year of existence, Herbert said it is vital the group keep local companies engaged to boost the fledgling council.

“We don’t just want to be another Zoom call or online presentation, so we’re finding unique ways to keep our community engaged, but you can see tonight with the turnout it’s really paid off.”

And the end-goal of the council is straightforward.

“We want to put the Milton business community on the map, and we want people to know about the great business that’s going on here in Milton,” Herbert said.