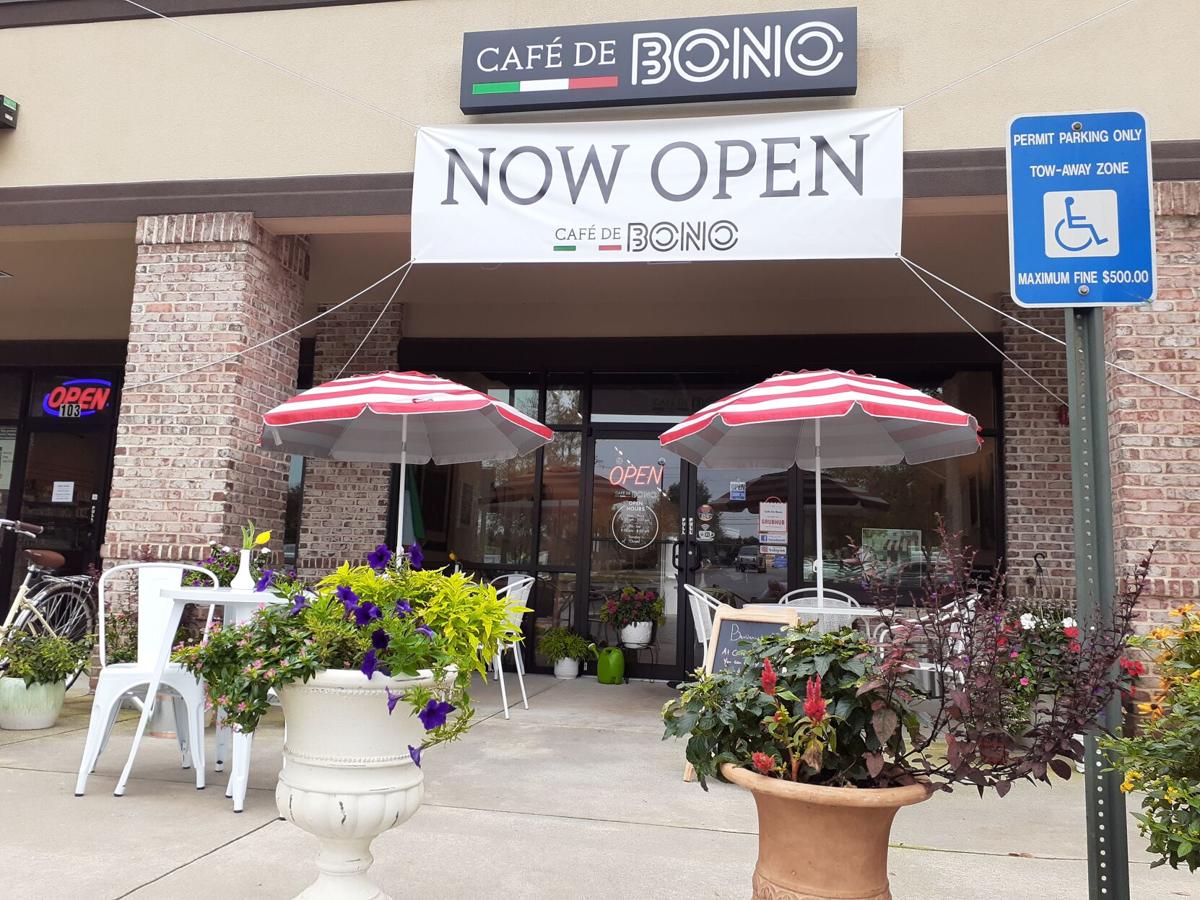 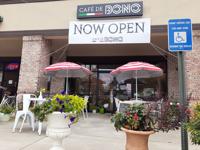 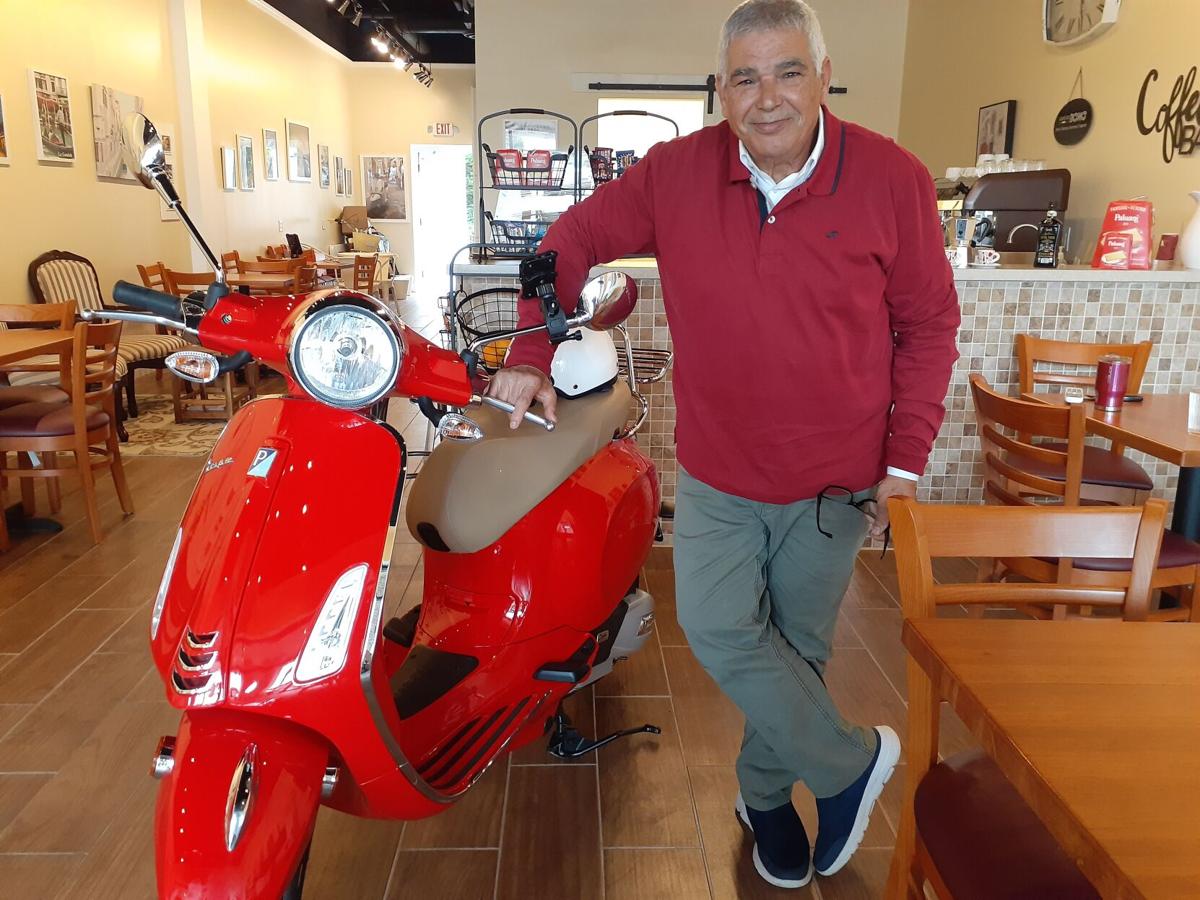 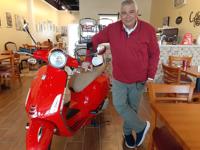 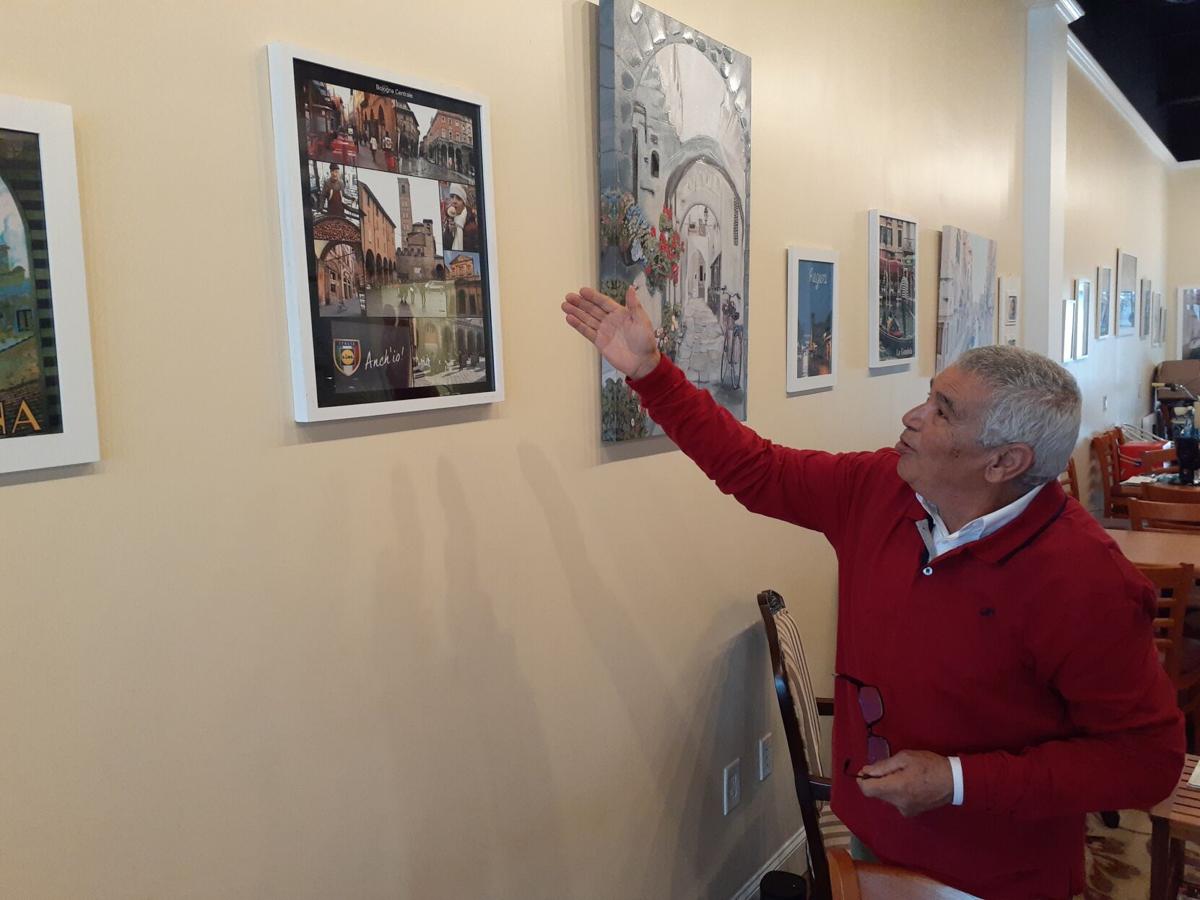 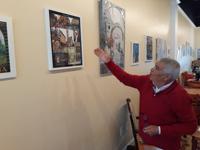 Basset Elarbi shows off paintings and photographs that serve as décor inside his family owned restaurant, Cafe de Bono. The Italian-style café opened June 5 inside the Watercrest Village shopping plaza in Alpharetta. 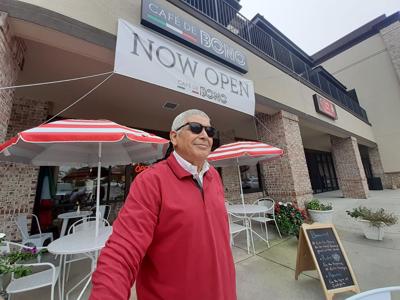 Basset Elarbi shows off paintings and photographs that serve as décor inside his family owned restaurant, Cafe de Bono. The Italian-style café opened June 5 inside the Watercrest Village shopping plaza in Alpharetta.

ALPHARETTA, Ga. — The scent of freshly baked pepperoni and focaccia bread welcomes you as you enter. You’re quickly greeted by a Vespa, the iconic Italian motorized scooter, showcased near the front door.

The serenade of Mediterranean folk music spills out to the outdoor patio. Portraits and paintings hanging inside conjure imagery of Venetian canals, Roman courtyards, cobblestoned Bologna back alleys and scenic row houses in Tuscany.

If the walls inside Café de Bono could speak, they would sing an Italian ballad.

“I want to bring the Italian feel to this place, so it will be unique in that sense,” he said. “People can come here to feel that culture. We’re trying to bring a slice of Italy to Atlanta. So I want people to be able to enjoy that without having to travel.”

Elarbi is a native of Tripoli, Libya, a picturesque seafront city just across the Mediterranean from Sicily.

Italy colonized Libya in 1911 and laid stake to the North African country until 1947. Elarbi grew up in the capital city at a time when the nation was reckoning with its reclaimed independence. During the colonization period and even after World War II, Italians continued to immigrate to his homeland en masse. Elarbi was immersed in Italian culture as a child and said he became fascinated with the architecture, fashion, flowery language and elegance of his neighboring nation.

“It grows with you and becomes a part of you,” Elarbi said. “The Italian culture was really an attractive culture. The language, the music, the taste, the food, the sense of design. Everything. ‘Dulce vida’ they call it in Italian: it means ‘sweet life.’

“This is exactly the reflection of that,” he added. “I would not be able to design something like this if I did not grow up there.”

That sentiment is apparent even in Cafe de Bono’s moniker. Elarbi named the restaurant after Galleria de Bono, a historic Tripoli shopping mall built as a scaled down version of the famous Galleria Vittorio Emanuele II high-end mall in Milan.

“I wanted the Italian-Libyan connection because I am Tripolitanian, Libyan,” he said. “So I said what can I do to bring both of them together.”

Elarbi emigrated to the United States and spent decades living in Texas. But after longtime Libyan dictator Col. Muammar Gaddafi was killed and his regime was overthrown in 2011, Elarbi and his family returned home to help rebuild their homeland. They spent seven years in Libya, but instability and increasing violence forced the family to flee and return to U.S. soil.

They moved to North Atlanta in 2018, and Elarbi decided to fulfill his lifelong dream of opening a restaurant. It was a dream borne from his years working in fine dining restaurants overseas as a college student.

But the timing for his decision chase his dream presented an unforeseen hurdle. Construction of Café de Bono began early this year prior to COVID-19 forced shutdowns that crippled restaurants nationwide. By the time the pandemic hit, they’d invested too much time and money into the business to turn back.

The Italian café opened June 5, as Georgia’s second wave of the contagion set in.

By the time Gov. Brian Kemp lifted statewide restrictions and allowed restaurants to fully reopen, several of the surrounding shops in the Watercrest Village plaza had shut down. On top of that, customers were leery about dining at the unfamiliar café because of the pandemic.

Both impacted the business. Elarbi said his family was forced to spend their rainy-day contingency in the first few months just to stay afloat.

“Before the coronavirus, we had a good reputation,” Elarbi said of the plaza. “I used to talk to people during construction. The shopping center itself was a good source of business. But some of the shops closed.”

But customers have started to take notice and are trickling in more regularly. Elarbi is considering adding a breakfast menu and expanding hours to attract more business. All in all, the goal remains the same: to offer the area a unique blend of Italian culture.

“This place has its own character,” he said. “It’s a touch of classic Italy, with a modern touch.”

Not since the Great Recession of 2008 has the economy been jolted by the likes of something as sweeping as the COVID-19 pandemic.