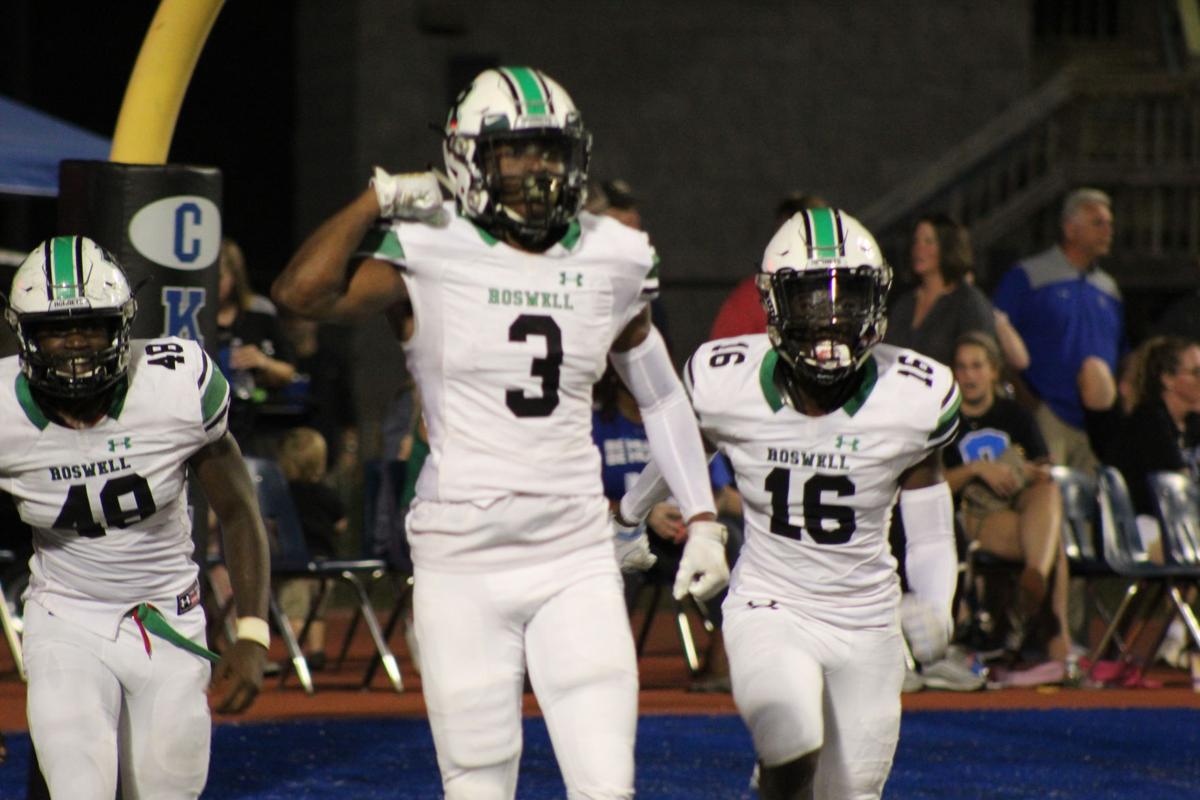 Doneiko Slaughter (3) celebrates his pick-six in the second quarter of Roswell's win. 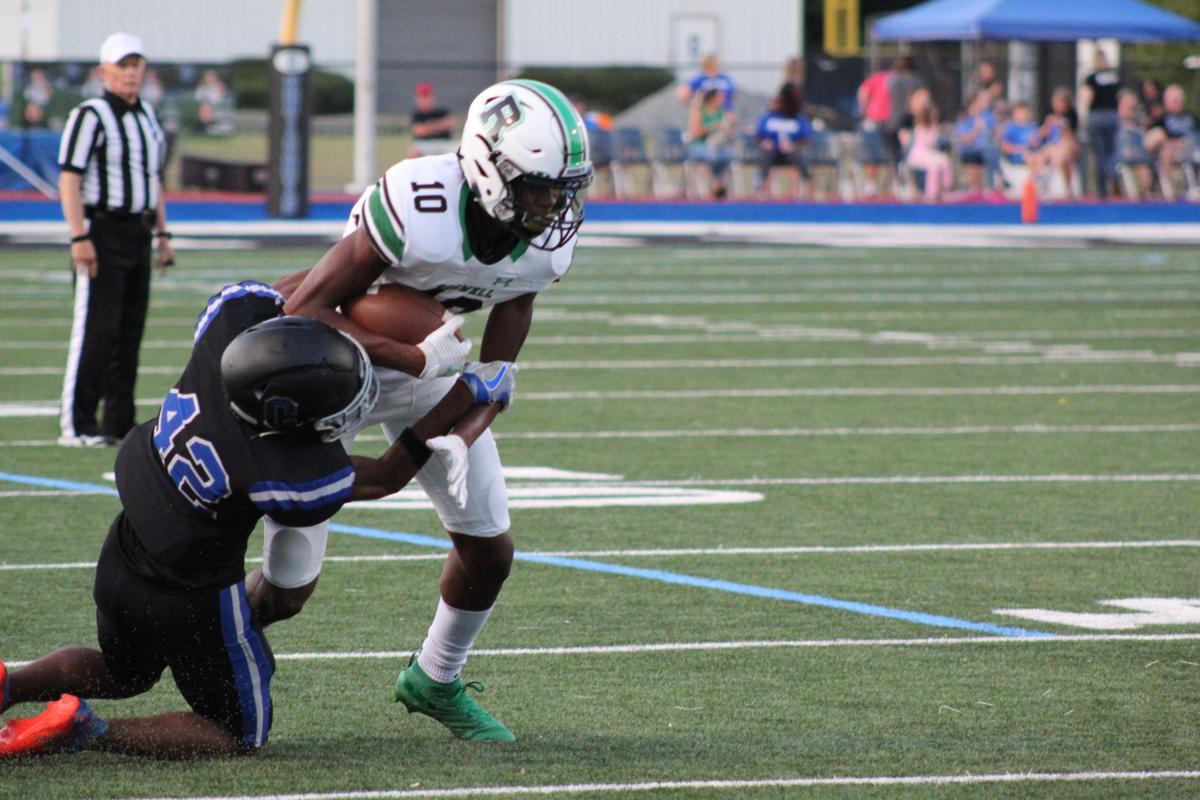 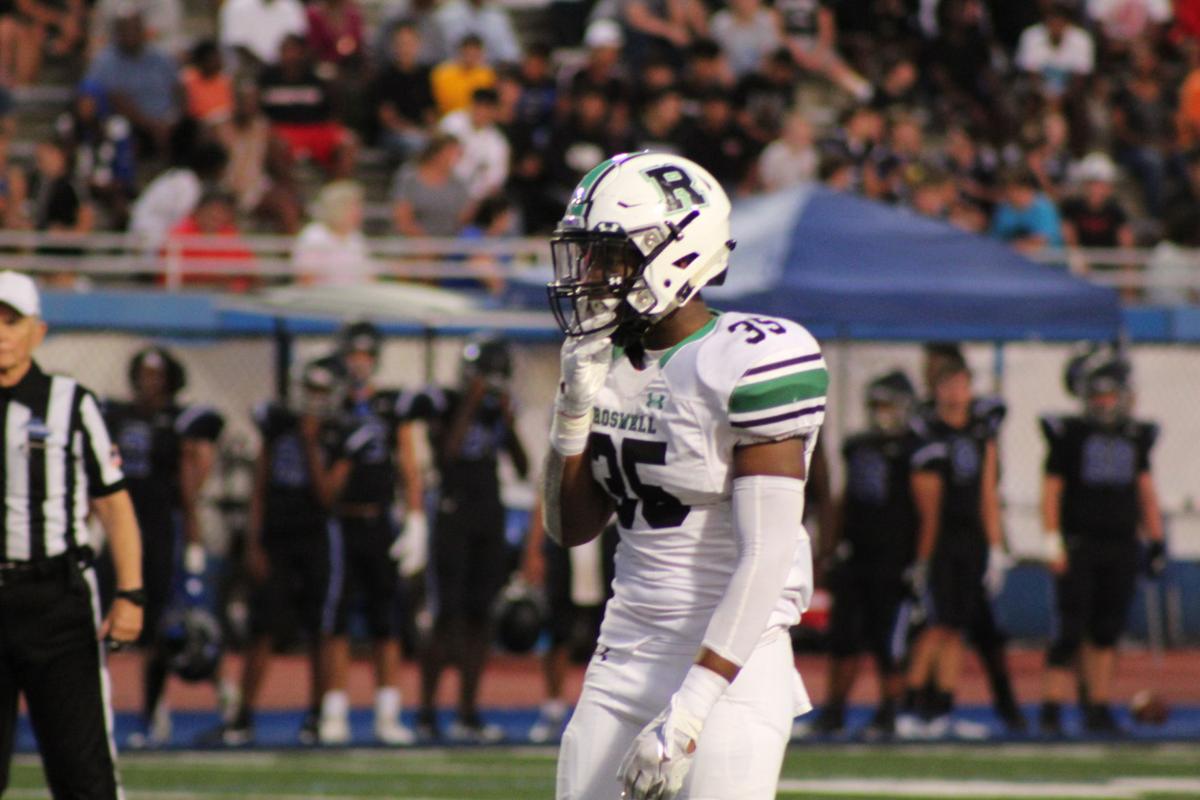 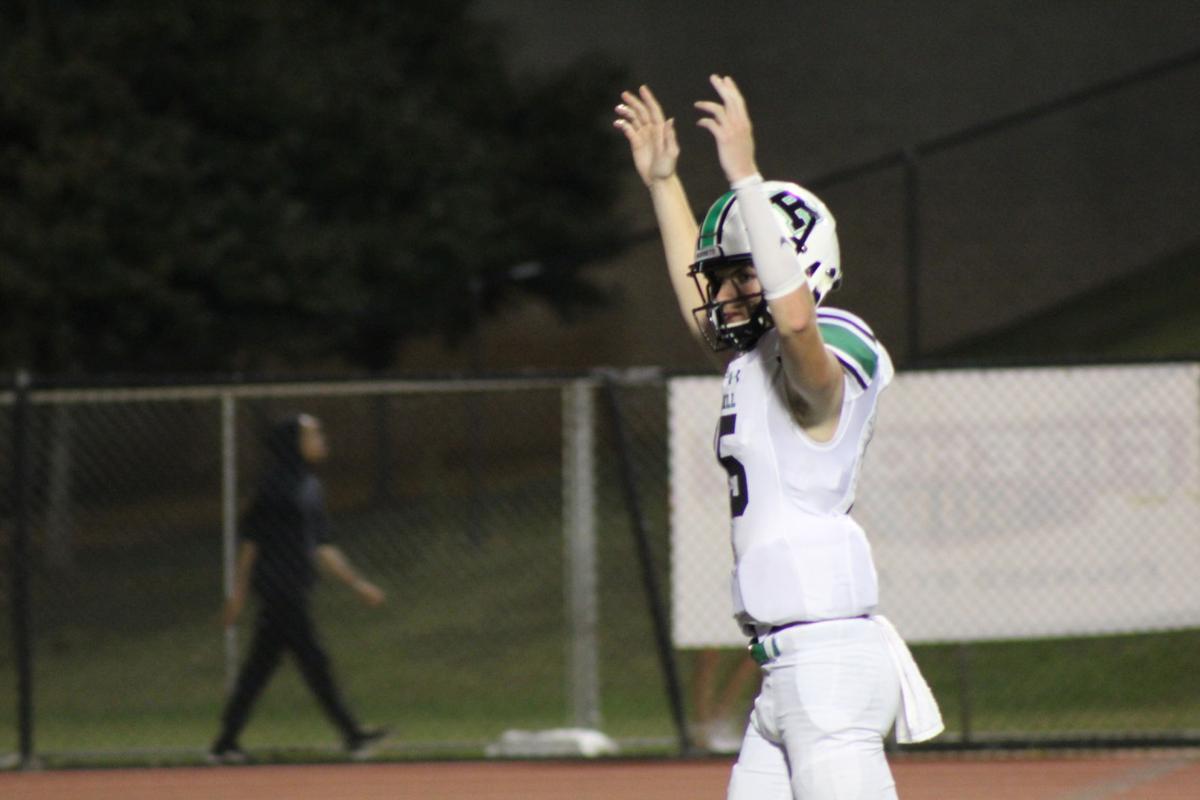 Roswell quarterback Ethan Roberts celebrates a touchdown in the Hornet 49-10 win over Centennial.

Doneiko Slaughter (3) celebrates his pick-six in the second quarter of Roswell's win.

Roswell quarterback Ethan Roberts celebrates a touchdown in the Hornet 49-10 win over Centennial.

ROSWELL, Ga. — For the sixth straight meeting, Roswell earned bragging rights over their crosstown foes and captured the Mayor’s Cup in decisive fashion Friday night. The Hornets forced five turnovers while the Roswell offense used its ground attack to take advantage and light up the scoreboard in the 49-10 win.

“I was glad to see us take over the game and be physical, run the football and control the clock and tempo,” Roswell head coach Matt Kemper said. “We knew defense was going to have to carry us forward the first part of the season, so hopefully this was a step forward for us on both sides of the ball.”

Much like their season opener against Campbell last week, Roswell started slow against the Knights but used a huge momentum swing late in the second quarter to run away with the game.

Roswell led 7-3 midway through the second quarter and Centennial looked to have Roswell stopped at midfield on fourth down. However, the Hornets lined up on offense and used a hard snap to draw Centennial offsides for a Roswell first down. Quarterback Ethan Roberts made the Knights pay for the miscue two plays later with a 33-yard touchdown throw to Jacob Jarrett to extend Roswell’s lead to 14-3.

That play marked the beginning of the end for Centennial.

On their next offensive play, Parker Sperier’s pass to the flat was tipped by Roswell’s Doneiko Slaughter, who came down with the ball and rushed 15 yards for the pick-six.

Less than a minute later, Sperier was sacked by Khaleed Mobley, who stripped the ball and recovered the fumble, his second of the season. On the next play, Roswell continued their scoring flurry with another touchdown connection from Roberts to Jarrett. Roberts was 7-10 passing for 83 yards.

After Roswell intercepted Centennial freshman quarterback Zaire Goff — who replaced Sperier in the second half — Savion McCrary found the end zone for his second rushing score. Ryan Hill put the score at 49-3 early in the fourth quarter with a 2-yard touchdown run.

“Any time you can line up two tight ends and run the football and get five yards a clip, that makes me happy,” Kemper said. “I’m very pleased with that and how physical we were up front.”

Ten players contributed to Roswell’s 265 yards rushing, led by McCrary with 80 and Singleton with 65.

Centennial’s offense was stymied by the Hornets throughout much the contest and were held to 169 total offensive yards, 87 of which came on a touchdown pass from Goff to Richard Shaw in the fourth quarter. Roswell held the Knights to 2-11 on third down conversions.

“We always talk about needing to have the most improvement from week one to week two, and we certainly got better on special teams, got better on offense, and the defense was still very, very solid,” Kemper said.

Roswell gets to lift the Mayor’s Cup this year, and Kemper is hoping this 2019 contest will continue the renewed rivalry series between he and first-year Centennial head coach Shane Sams.

“I told (Centennial Athletic Director Jeff Burch) he hired the right guy,” Kemper said. “Coach Sams is doing a great job, he’s putting down roots here and hopefully we are going to play this game for years and year to come.”

Roswell improved to 2-0 this season heading into its Sept. 13 matchup at home against West Forsyth. Centennial’s loss put the Knights at 0-2 entering Region 7-AAAAAA play. The Knight begin their region slate Friday on the road against Pope.