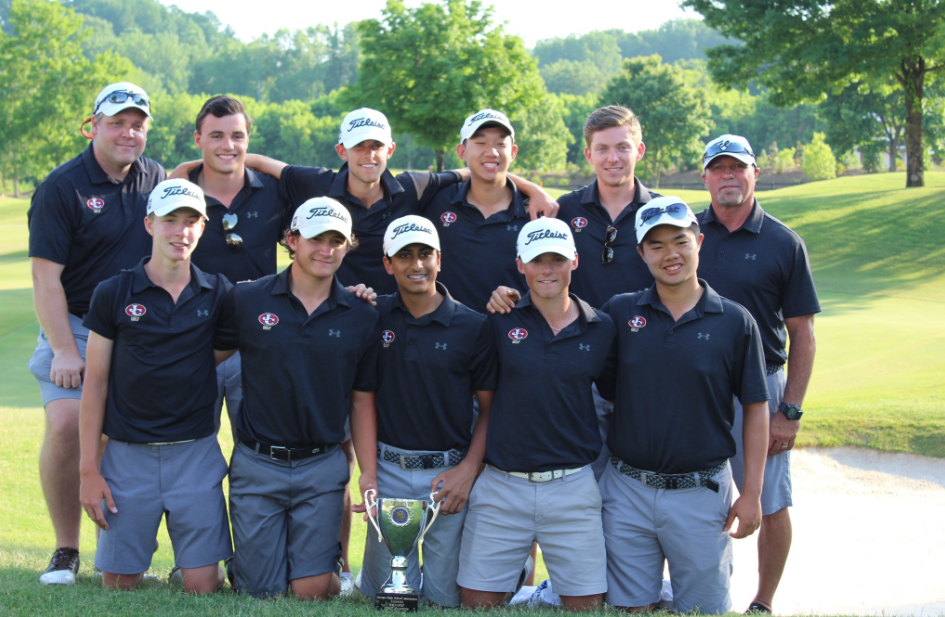 Johns Creek boys golf captured its fourth straight championship May 21 at Woodmont Golf and County Club in Canton. The Gladiators finished 26 strokes ahead of the field with Andy Mao earning the low medalist accolade for Class 6A boys play. 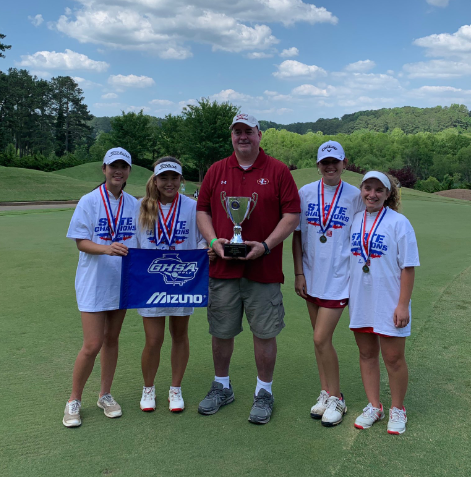 The Johns Creek girls put on a dominant performance in the Class 6A girls finals and finished 37 strokes ahead of crosstown rivals Northview in second. The Gladiators’ title was their second in three years. 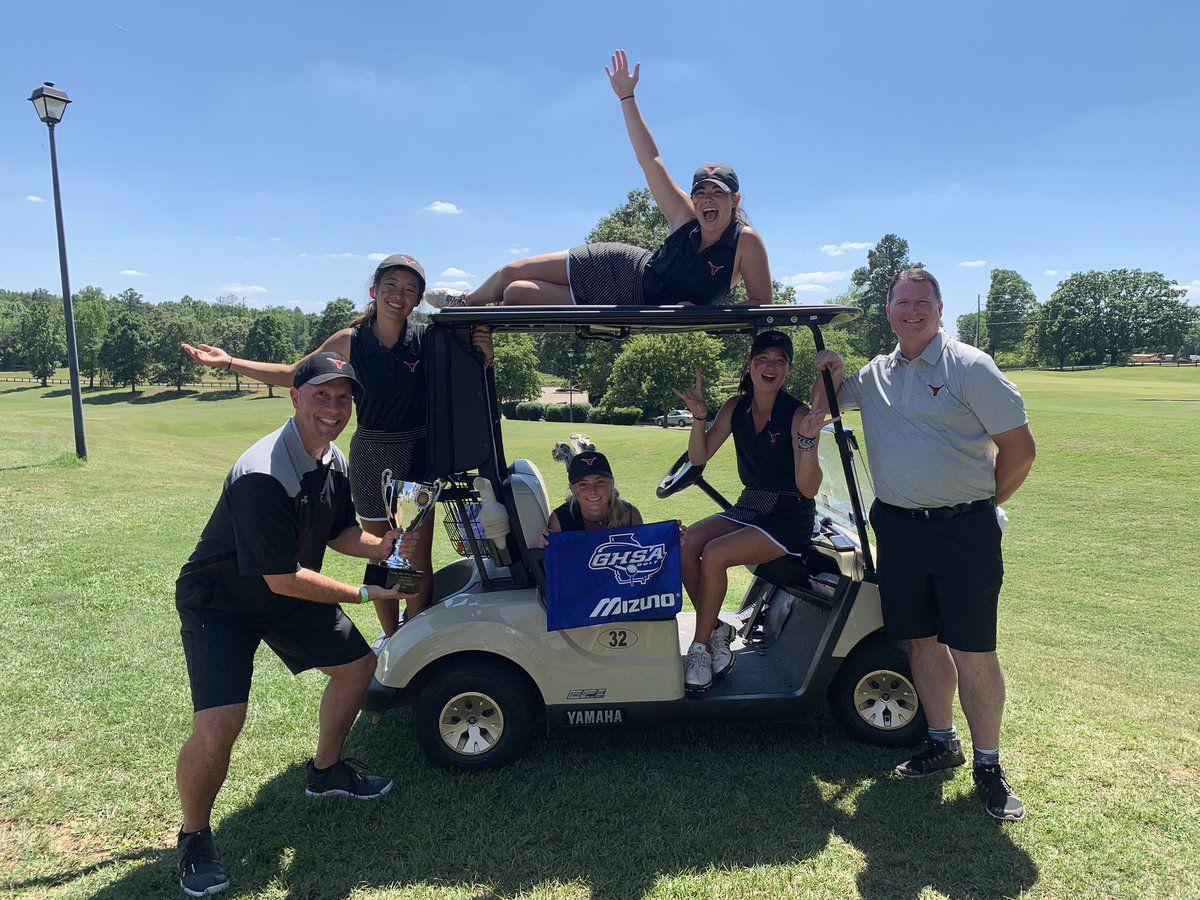 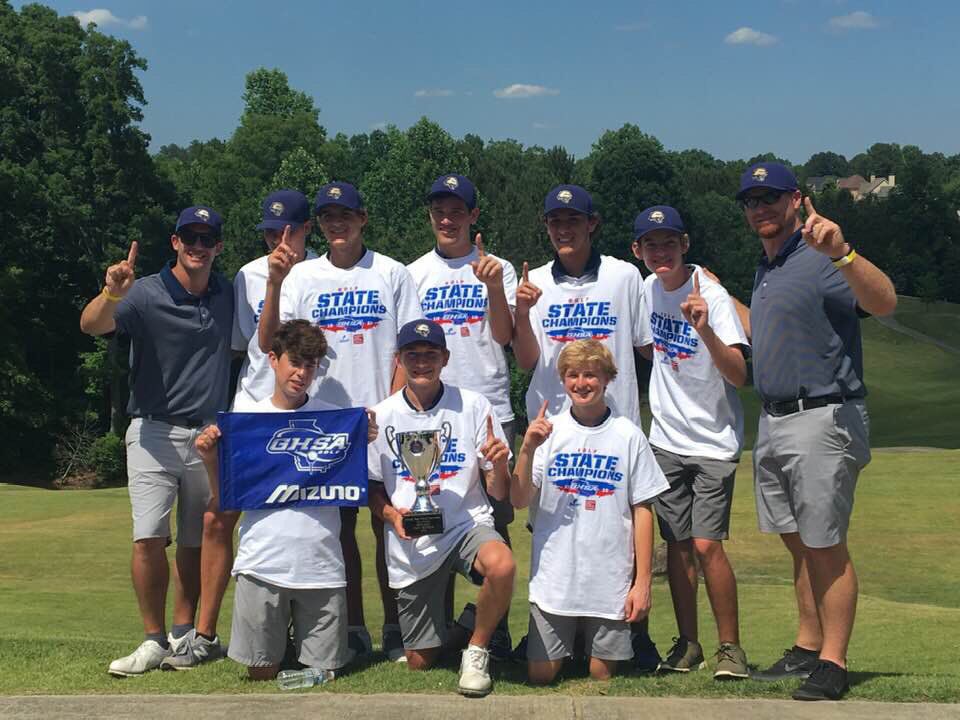 Johns Creek boys golf captured its fourth straight championship May 21 at Woodmont Golf and County Club in Canton. The Gladiators finished 26 strokes ahead of the field with Andy Mao earning the low medalist accolade for Class 6A boys play.

The Johns Creek girls put on a dominant performance in the Class 6A girls finals and finished 37 strokes ahead of crosstown rivals Northview in second. The Gladiators’ title was their second in three years.

The Johns Creek boys continued their dominance in Class 6A with the program’s fourth straight state championship. The Gladiators bested Creekview by 26 strokes at Woodmont Golf and Country Club in Canton, with five of their six golfers placing in the top 10.

Andy Mao led Johns Creek with an 8-under-par 64 in the first round and shot four under par in the second round to best teammate and state runner-up Bruce Murphy by nine strokes. Murphy was three-under par for the tournament.

Deven Patel tied for third at one under par with Jake Calamaro and Preston Topper finishing even after two rounds. Chandler Drake was 17 over par and tied for 52nd.

The Cambridge boys also competed in Class 6A play, tying with Dalton for fourth at 31 over par.

Jake Peacock led the Bears at one under par for the tournament to tie for third. Blake Farbman was seven over par and tied for 15th, and Ryan Demit shot a 154 to tie for 31st.

Centennial’s Fish Brosmer competed individually at the state finals and tied for 101st at 37 over par.

The Johns Creek girls completed the title sweep for the Gladiators by capturing their second state championship in three years with a commanding performance over the field at Cobblestone Golf Course in Acworth.

The Gladiators led by 23 strokes after round one and continued to outpace the field, taking the state title at two over par, 37 stokes ahead of crosstown rivals Northview in second.

Gen Wu won the individual state championship with rounds of 68 and 73 to finish three under par, a single stroke ahead of teammate Kate Song who shot a 71 in both rounds. Amy Ng was seven over par in fifth, and Madilyn Zimmerman tied for 12th at 16 over.

While Johns Creek outpaced the entire field, Northview had plenty of separation over Valdosta in third with a 24-stroke margin between the teams.

Erica Scutt led the Titans with a four-over-par 148 to tie for third. Scutt improved on her round one 76 with a 72 on the final day of play.

Chattahoochee also showed the strength of Johns Creek area schools by placing eighth in team scores at 100 over par. Kimberly Shen posted the top score for the Cougars at four over par to tie for third.

Alpharetta’s Sanika Kulkarni competed in individual play, tying for ninth at 12 over par. Kulkarni shot a 78 in both rounds.

In Class 7A play, the West Forsyth boys team made history by becoming the school’s first team championship in boys competition.

The Wolverines captured the title at Hamilton Mill Golf Club, shooting 33 over par to beat out Walton by 10 strokes.

Jason Quinlan finished a single stroke out of first with a one-over-par 145. Teammate Peyton Balent shot three over par to tie for third, while Jackson Hilton finished 18th with rounds of 77 and 78.

The Wolverines’ state title was the third for Forysth County boys teams. Lambert captured the title in 2015 and Forsyth County High won in 1975.

Two other Forsyth County teams placed in the top 10 with Lambert in eighth and North Forsyth finishing ninth.

North Forsyth was led by top-30 placements from Nick Lasseter and Bradley Boone. After shooting an 87 in the first round, Lasseter improved his second-round score by 15 strokes to finish at 15 over par. Boone shot an 80 in both rounds to tie for 30th.

After a one-year absence from the top of the podium, the Lambert girls captured their sixth state title in seven years at Chimney Oaks Golf Club in Homer.

The Longhorns shot 20 over par to finish 17 strokes ahead of Mill Creek in second.

Lambert earned the top two spots in individual play with Averi Cline placing as the low medalist. Cline shot a three-over-par 147, a single stroke ahead of teammate Rachel Burrell. Burrell shot a 77 in round one but improved that score by six strokes in the second round to place as state runner-up.

Iris Cao also placed in the top 10, tying with three other players at 15 over par.

South placed two golfers in the top 20 with Catherin Stoerker tying for 10th at 15 over par, and Kennedy Arnette finished tied for 18th with a 165.

Roswell’s eight-place finish in team scores was led by Emily Haigwood who placed fifth at nine over par. Haigwood finished two strokes ahead of teammate Kady Foshaug who placed sixth.

Milton’s Keira Jones tied for 10th in individual play with an 81 in round one and a 78 in round two.

In Class 4A, the Blessed Trinity boys placed 11th in team scores and were led by a 12 over par performance from Adam Reese who tied for 33rd in individual play at Columbus Country Club.

The BT girls placed fourth in team scores at Maple Ridge Golf Club by shooting 35 over par for the tournament. The Titans placed two golfers in the top five, led by Allie Kantor who placed fourth. Kantor improved her first-round performance by nine strokes in the second day of play to finish five over par.

McKenzie Mages shot seven over par to tie for fifth.

The King’s Ridge girls team was the only local squad to earn a berth in the state finals at Green Island Country Club.

The Tigers placed ninth in team scores at 68 over par. Merritt Miller placed 15th at 31 over par and Katy Ye tied for 21st six strokes behind Miller.