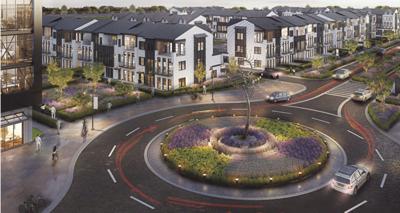 ALPHARETTA, Ga. — The Alpharetta City Council approved two major rezoning cases that are likely to change the look and feel of Alpharetta for decades.

At its Dec. 16 regular meeting, the council approved an amendment to the Tech Village Master Plan allowing for construction of a 62.47-acre mixed-use development on Lakeview Parkway near Ga. 400.

The newly revised plan for 360 Tech Village calls for a different mix of retail/restaurant, office and residential on about 62 acres with the city’s second largest lake as an amenity.

This is the third time this year developers for the property, TPA Group, have come before the council in hopes of getting the $250 million mixed-use development off the ground.

In January, the council denied a request to extend a May 2019 deadline for TPA to seek building permits for some 276 apartments before the site reverted to its previous zoning that allowed for-sale residential. For one thing, city officials expressed concern that the city had no shared document with the developer that specifically detailed the site plans.

TPA Group officials returned in October seeking to submit a revised proposal before the end of the year, and the request was granted. Under city policy, the developer would normally not be allowed to resubmit a new zoning proposal until late January of 2020. City code does allow for the council to shorten that frame to six months.

Crawford Arnold, TPA Group director, said in October the urgency for getting the new plan approved before January was to secure a corporation seeking 120,000 square feet for its corporate campus. The corporation, he said, plans to provide 500 jobs with an annual average salary of $70,000.

Crawford told council members Dec. 16 that the site is already home to 2,000 jobs, and he expects another 2,300 added if the modifications were approved.

The majority on the council said they were struck by the plan, pointing to its dedication of more than 30 acres — half the site — to public green space, including access to Morrison Lake.

One sticking point was a condition approved by staff and members of the Alpharetta Planning Commission regarding construction and occupancy of the 255 apartments. The condition called for allowing occupancy of 140 apartments in January 2022 and the other 115 in 2023.

Arnold said the condition would be expensive and prohibitive, either requiring apartment construction to be interrupted or mandating that nearly half the total units sit unoccupied for a year.

The council’s final approval removed the lag time in occupancy for the apartments.

Mayor Jim Gilvin and Councilwoman Karen Richard voted against the measure, saying it backtracks on the city’s goal of reducing the percentage of for-rent housing in Alpharetta.

Richard said the city set a goal five years ago of establishing a level of 68 percent owner-occupied and 32 percent for-rent housing. Back then, she said, rentals accounted for 36 percent of the local housing, much higher than surrounding cities and counties. That figure has hardly changed, she added.

“It’s been five years, and we haven’t moved the needle at all,” Richard said.

Gilvin was even more adamant in his opposition.

This is the eighth major mixed-use development approved for Alpharetta in the past several years, Gilvin said.

“Six of the people on this council have faced election over the last two years, and I don’t have to wonder what the people of Alpharetta want from us,” Gilvin said. “It’s been loud and clear: fix the traffic and restore some sense of balance to the level of development.”

ALPHARETTA, Ga. — Alpharetta’s portfolio of hotels just got bigger with the recent opening of the Home2 Suites by Hilton Alpharetta at 12075 M…